The filmmakers of 'Liger' released a new set of photos today to announce that the shooting of the USA schedule was completed with a dinner party. 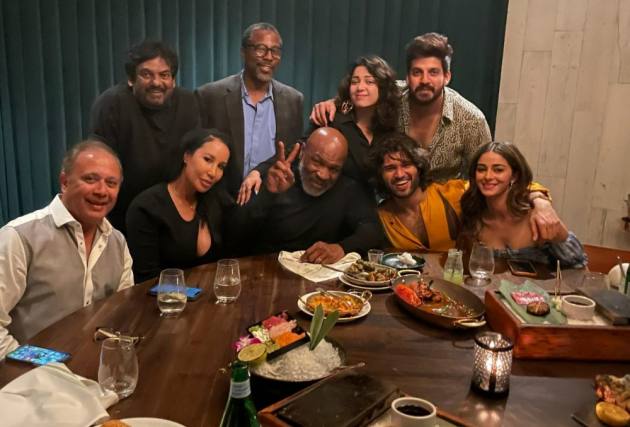 It is widely known that Tollywood's ace actor Vijay Devarakonda is now working on his forthcoming film 'Liger.' It is directed by Puri Jagannadh and stars Ananya Panday as the lead actor. The entire team is working hard to finish the film so that it can be released in theatres as soon as possible! So, here's some excellent news! The 'Liger' crew completed the filming schedule in the United States and celebrated with famed fighter Mike Tyson, who appears in a cameo role in this film.

The creators released the amazing photos on their social media accounts and treated  Devarakonda's, Pandey's and Tyson's followers with snippets of visual delight.

Recently, Devarakonda shared another heartwarming photo of him with  Panday, Charmee Kaur, and the director Puri Jagannadh with a beautiful sunset in the backdrop.

Panday also took to Instagram to share some aesthetically pleasing photos of her posing in the hues of the sunset from a cruise.

This action romance  film is a much awaited one as Deverakonda will make his Bollywood debut opposite Pandey  in the role of a martial arts expert . Tyson's cameo is a sure highlight which has already garnered the film's making with significant attention. 'Liger' will be available in Hindi, Telugu, Tamil, Kannada, and Malayalam.  The film would also be  featuring a stellar supporting cast which enlists Vishu Reddy, Ali, Makarand Desh Pandey, and Getup Srinu.

Under the banners of Dharma Productions and Puri Connects, the film is co-produced by Karan Johar and Kaur. 'Liger' film's direction is done by Jagannadh.