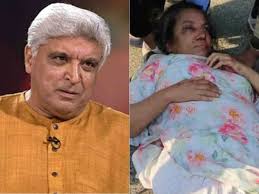 Shabana Azmi was injured in an accident on Saturday afternoon on the Mumbai-Pune Expressway. Javed Akhtar, Azmi's husband, has come forward to assure fans that she is alright and not critically injured. Azmi is currently undergoing medical tests at Kokilaben Dhirubhai Ambani Hospital in Mumbai.

Javed Akhat assured, "Don’t worry. She is in the ICU but all the scan reports are positive. It seems there’s no serious harm done." Earlier, the hospital''s CEO Dr. Santosh Shetty had also stated that the actress is stable and under observation.

The accident occurred on Saturday when Azmi's car rammed into a truck on the Mumbai-Pune expressway. Akhtar who was following behind in a separate car remained unharmed.
The truck driver, Rajesh Shinde had filed an FIR against Azmi's driver Amlesh Kamat citing rash driving on the latter's part as the cause of the accident. Following the accident on Saturday, Farhan Akhtar, Anil Kapoor, Tabu, Shibani Dandekar and other Bollywood celebrities were seen visiting the hospital where Azmi is currently admitted.

Prime Minister Narendra Modi and Delhi CM Arvind Kejriwal took to Twitter to express their concern for Shabana Azmi and wished her a speedy recovery.