Kangana Ranaut On Social Causes: One Person Insignificant; We Need To Get Everyone Together

Kangana Ranaut gets candid about social causes. The ‘Judgementall Hai Kya’ star feels Bollywood is self-centered and has its passion misplaced. 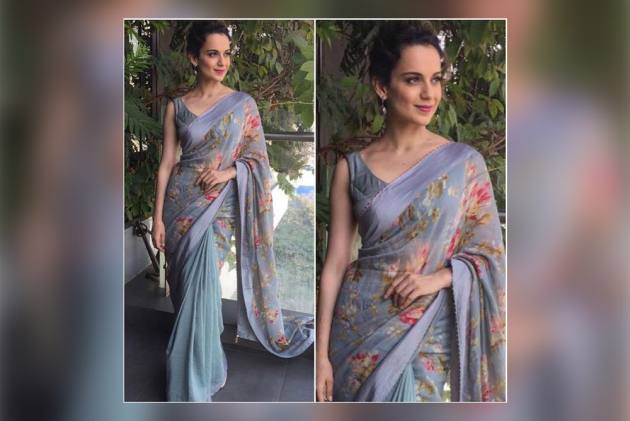 Dressed in a pristine blue sari with floral prints, Kangana Ranaut was supporting Cauvery Calling initiative not just by her words but her attire too. Her last tryst with media was termed brazen and didn’t go down well with many. But Kangana confesses that incident has made her cautious, especially when she wants to urge people to join hands for a noble cause. “It is very difficult. To be in media’s scrutiny…and with one slip of the tongue, it is like playing with fire. Either you do it properly, or otherwise, you can do more damage than benefit. In my 20s I felt I would do charity, but now I feel one person is insignificant in the scheme of things. We need to get everyone together. It’s not easy doing something like this. But I truly feel that it’s not difficult for people to contribute.”

Speaking about the cause, Kangana gets nostalgic, “When I was eight or nine- years- old, my father told me the rings of a tree represent its age. I was intrigued and would count the life of a tree whenever someone felled it. I used to wonder: it took so many years for the tree to grow to this size, just a few moments to cut it down. Humans are very selfish when it comes to the consumption of resources.”

Asked how it feels when despite the controversy, she was invited to be an advocate of the movement, Kangana says, “My presence in this is because of people. I am today because the media made me a star. I feel obliged in some way to give back. It also stems from a realisation when I was building my home. I just felt we draw so much resource from the earth. Right now, I own three to four homes, and there is a lot of overconsumption of resources. Then I thought does a person like me need three to four homes? That’s when I decided I will stop buying properties. How else will you give back to nature unless you die and offer your body as fertiliser to the soil? You only draw and never give back. What is the point of feeling panicky if we don’t intend to solve it?”

Celebrity endorsements of such causes are perceived with suspicion; a frivolous attempt at garnering some good PR. Kangana doesn’t rebuff it as media being cynical about everything involving stars. She says, “We do not understand one thing that there are so many rich and brilliant people in the world. They never get the kind of attention the artists get. Society sees artists as their leading voice. But I know few artists are exploiting it. I have not used a platform which is mine. I have used a platform which has been given to me. It’s a different thing if I have to do stupid things on a platform created by me. Fiddle with my thumb and do crazy things. The cause doesn’t deserve people sitting and fiddling with their thumb.

I, as a role model, definitely understand that if a place is given to me than what is the value of it. I truly have not done anything extraordinary. I have only done what a celebrity should have done. Somewhere the celebrity culture has completely derailed and has been bastardised to another level. Celebrities and artists are supposed to be eccentric. That doesn’t mean you become manipulative. But this dynamic is changing. People are a lot more aware today. Now people question celebrities why they deserve this platform? It’s not going to be long before they question all those who abuse the platform for their agenda.”

She questions selective bias about choosing causes and why local issues don’t get the same attention from celebrities. “I see a lot of hullabaloo about Amazon fire; which is, of course, a matter of concern. But where does this concern vanish when it is about Cauvery or Chennai droughts. Nobody had a social media post for that? So many people died. For that matter, let’s speak about the Aarey colony incident. If a film is stuck with Censor Board, I see petitions doing rounds. But no such petition for Aarey? I thought the people who play the messiahs of the industry would get together and do something. Obviously, the industry is more self-centered. It has misplaced passion and is manipulative. I don’t know why I never see them fighting for what is right. What kind of flak they would possibly get if they would have possibly stood for Aarey deforestation?” she concludes.