Actress Kangana Ranaut is usually seen slamming Bollywood by calling it a mafia. Now that her latest film ‘Thalaivii’ is finally available for all to watch, she urges the same ‘Bollywood mafia’ to rise above petty emotions and appreciate art. 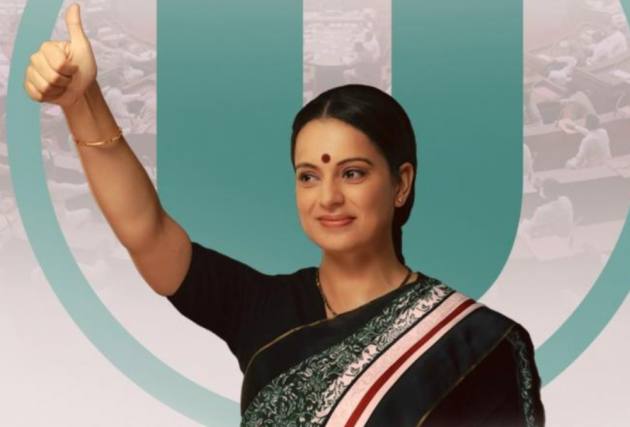 Actress Kangana Ranaut's newest film, the J Jayalalitha biopic ‘Thalaivii’, has garnered generally positive reviews from reviewers and moviegoers. The film is now available on Netflix, and the performer has sent a thank-you message to her crew.

Taking to Instagram stories, Ranaut wrote, “Rarely a film loved passionately and unanimously… And ‘Thalaivii’ is one such film… I am glad people getting to know Purchai Thalaivi Dr J. Jayalalithaa’s story. also big thanks to my team for making a film which is a shining diamond in my filmography. #gratitude (sic).” 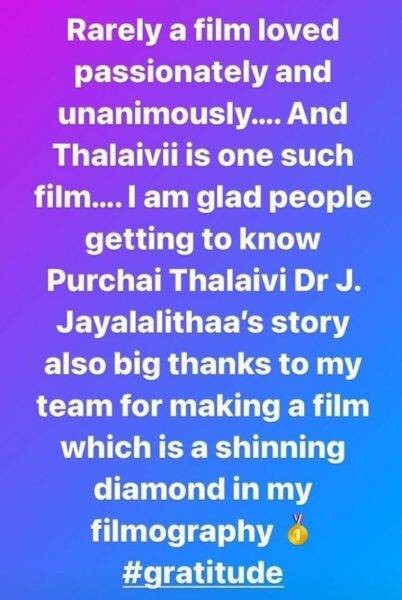 The film ‘Thalaivii’ is based on the life of former Tamil Nadu Chief Minister J Jayalalithaa. Ranaut plays Jayalalithaa, while Arvind Swami plays M. G. Ramachandran in the film. The film delves into Jayalalithaa and MGR's friendship, as well as the former's ascent as an actress and politician. However, now that the film is available on Netflix, more people can view it.

Despite the fact that the film was released in theatres across the country on October 10, it did not have a theatrical release in Mumbai. Ranaut, who frequently criticises Bollywood and alludes to a ‘Bollywood Mafia,’ has now encouraged the Hindi film industry to come up and show support by applauding her film.

She wrote, “Meanwhile waiting for Bollywood Mafia to keep our political and ideological differences aside just how I don’t find it difficult to appreciate genuine art may be they can also rise above petty human emotions and for once let art win #Thalaivii (sic).” 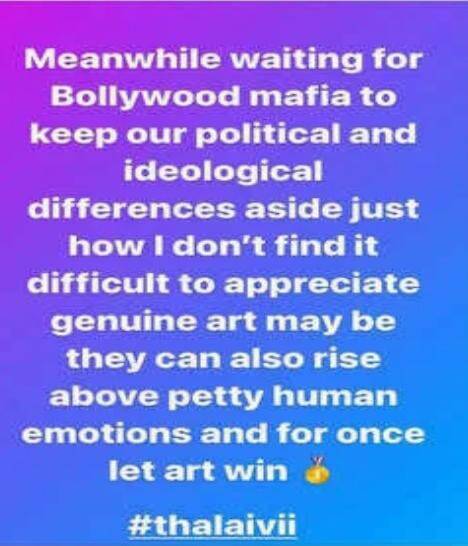