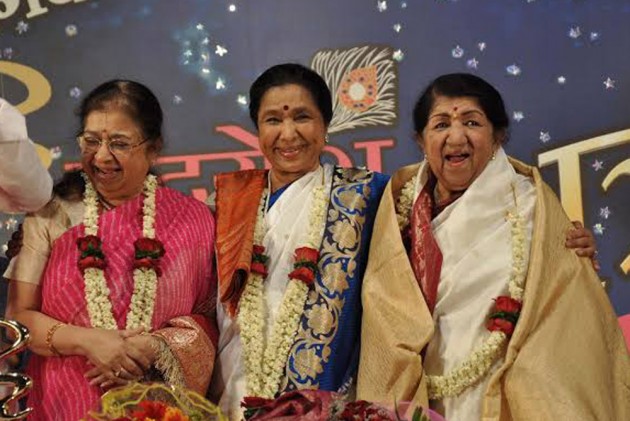 At 13, just as she was about to start her music career, Lata lost her father. Being the eldest among her five siblings, the responsibility of the family fell upon her and she took the challenge head-on. She started singing in films and became the sole bread-earner of her family. She worked hard to support her siblings -- Asha Bhosle, Usha Mangeshkar, Meena Mangeshkar and Hridaynath Mangeshkar -- has never looked back, since.

In a career spanning over seven decades, Lata, the 'Nightingale of India', has crooned over 1,000 songs in multiple languages. It's 2019 today and despite having a pool of new voices in the industry, people still swoon over Lata's melodies, which are evergreen and timeless, especially "Lag ja gale" and "Piya tose naina lage re".

Younger by four years, Asha entered Bollywood when Lata was already an established singer. And since then, there has been a simmering rivalry between the sisters, with the two reportedly, having not been on talking terms for years.

Some reports claim that the differences emerged after a 16-year-old Asha eloped and married Lata's personal secretary, the 31-year old Ganpatrao Bhonsle in 1949. No one knows what's the truth, but these two sisters always dismissed these reports.

In an interview to Hindustan Times, Lata refuted the rumours and said: "This talk of our differences has been blown out of all proportions over the years. We are sisters first and foremost, and forever. We were never rivals as singers. What Asha can do before the mike I can never do. I can never sing 'Piya tu ab to aaja' or 'Chura liya hai tumne jo dil ko' the way she can. My point is, we had our own individual space as singers. Why would we be seen as rivals? Yeh bilkul galat hai.

"People say all kinds of things about our relationship. There's no fight between us. Until some years back we lived in adjoining flats and there was a connecting door between our homes. We were constantly in and out of one another's homes. At a tender age Asha left home and got married. And she made a big name for herself. I'm very proud of her. We share a very healthy relationship."

Not only with Asha, Lata has also collaborated many times with her younger brother Hridaynath, fondly known as Balasaheb in the music and film industry.

Hridaynath debuted his music career in 1955 with the Marathi film "Akash Ganga". He has composed for many Marathi films like "Sansar", "Ha Khel Savalyancha", "Janaki", Jait Re Jait and "Nivdung" and a few Bollywood films like "Lekin..." and "Maya Memsaab". He also produced Ghalib, an album of Mirza Ghalib's ghazals, which were sung by Lata Mangeshkar.

Mumbai-based socio-cultural organisation Hridayesh Art established Hridaynath Mangeshkar Award in 2011 in his honour. The award felicitates and recognises successful individuals across the country from various walks of life.

Hridaynath says Lata is almost "like a second mother" to him. Reminiscing the old days spent with him, Lata told DNA INDIA: "I am Didi to many in the film industry and across India, but on Raksha Bandhan, I tie a rakhi only to my brother Hridaynath. I've doted on him from the time he was born. I was almost like a second mother to him when he was a child - singing him to sleep, feeding him his meals, dressing him up for school."

On Sunday, a day after she turns 90, Lata Mangeshkar will release the Hindi translation of memoirs penned by her sister Meena at her Mumbai's residence. The book, titled "Didi Aur Main", traverses Meena's journey from the days of Lata's struggles to her success.

"The book ('Didi Aur Main') is my gift to Didi on her 90th birthday. I have tried my best to coalesce into this book the bitter-sweet memories of the Mangeshkar family," said Meena.