In an interview the veteran singer claims there have been better singers than her in the industry and adds that she is grateful to God and her parents to have had such a long and distinguished career in singing. 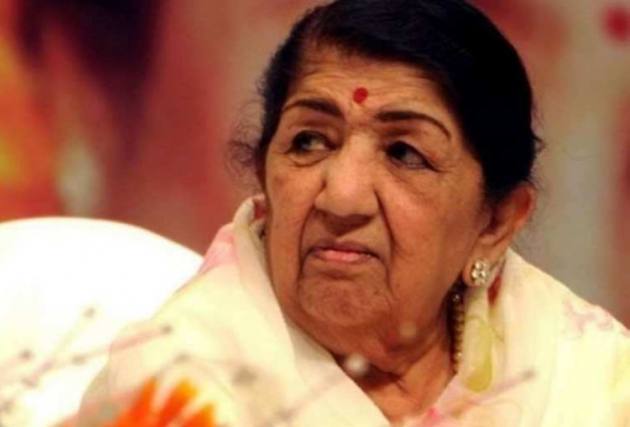 Veteran singer Lata Mangeshkar, who began her singing career seven decades ago, was delightfully surprised when filmmaker Vishal Bharadwaj reached out to her to ask her permission to release ‘Theek Nahi Lagta’, which was believed to have been lost.

"Vishal ji told me that the song has been found and asked whether he could release it. I said, 'Why would I mind? It is such a beautiful song. You should release it'. He also told Gulzar sahab about the song. He then mixed it again and that's how the song came to be released," she said.

Like ‘Theek Nahi Lagta’, many songs have got lost over time, said Mangeshkar.

"Recently I heard one of my songs, which is unreleased. What happens is that sometimes there are too many songs in a movie and it hinders the flow of the film. So they remove the song and try to put it in another film. But if it does not fit, it just stays in storage and people forget about it with time. But it's not possible for me to look for them, it should be done by someone else.

"Also, it is not always possible to get them released. Sometimes the producer does not give permission or the film stays unreleased or the lyricist does not agree… there are many such hindrances," she pointed out.

Mangeshkar, who turned 92 on September 28, remembers her early days and says the memories are still fresh in her mind.

"That long journey is with me and that little girl is still with me. She has not gone anywhere. Some people call me 'Saraswati' or say that I have her blessings. They say I am this and that. All this is nothing I believe but the blessings of my parents, our deity Mangesh, Sai baba and god,” she said.

"It is their blessing that people like whatever I sing. Otherwise who am I? I am nothing. There have been better singers than me and some of them are not even with us. I am grateful to god and to my parents for whatever I have today."

Gulzar has been an abiding favourite for Mangeshkar, the golden voice behind more than 25,000 songs in different languages. She said she still remembers how his words "meri awaaz hi pehchan hai" from the song ‘Naam Gum Jaayega’ in the film ‘Kinaara’ came to reflect her own storied journey in music with her fans conflating her voice with her identity.

She remembers vividly the day she did the playback for the song.

"Everyone in the country knows that Gulzar sahab writes beautifully. He also speaks beautifully. When I was singing (this song), he came to me and gently said, 'Meri awaaz hi pehchan hai aur ye hai pehchan'. He said something like this. But later, I also started saying that 'my voice is my identity'. And now whoever sings that song or writes about me says those lines,"  Mangeshkar said.

Asked what are the songs that she likes to hum, Mangeshkar said, "It will create trouble if I tell you this (gadbad ho jayegi)."

She went on to recall the music directors she loved working with.

Mangeshkar said she loves different music styles from across the country and the fact that there are so many languages.

"I don't know whether people know this but I like the south Indian style of music. I love Bangla music and the Bengali songs that I have sung. Hindi music is also there and so is Gujarati'. I have sung in all languages and I love all the different schools of music that are there in India."

She also recalled her collaboration with the music directors, young and old.

While Shankar Jaikishan, Madan Mohan, Jaidev, Laxmikant Pyaarelal, SD Burman, Naushad and R D Burman are some of her favorites from the bygone era. In the current lot, she gives music maestro AR Rahman a thumb’s up.

"Though he is doing less music, A R Rahman's music is good, I like his compositions "There is Ilaiyaraaja in the south, I have done playback for him. He is also good. I don't know the new ones but I pray that they are successful."

Her first collaboration with Bhardwaj was for 'Maachis' in 1996. She was initially apprehensive but was soon won over by the then budding composer's talent. She sang five of the eight songs in the movie, including 'Tum Gaye', 'Pani Pani Re' and 'Bhej Kahaar'.

"When Vishal ji came, I was initially apprehensive as I did not know what kind of music he makes but I loved the very first song he created. I realised he is a great music director and I was really happy to sing for him. I sang many songs for him in 'Maachis', they were really beautiful," she said.