Laxmmi Bomb: Akshay Kumar Bows To His Inner Goddess This Navratri As He Wows Us With His Terrific Look

Akshay Kumar took to social media to share his look as Laxmmi from his upcoming film, Laxmmi Bomb. The actor’s terrific look in a saree will leave you stunned. 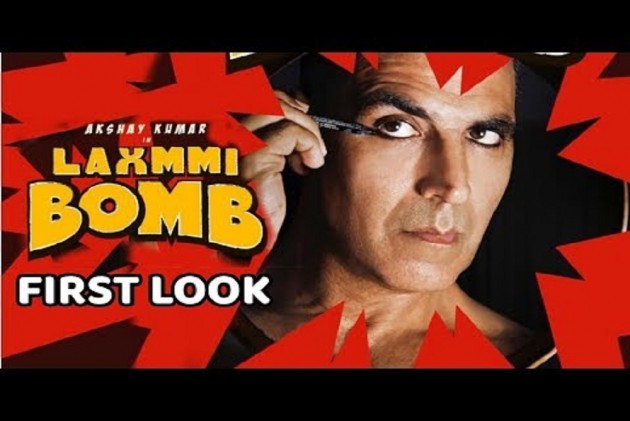 From quite some time, a Hindi remake that has been in the news is Laxmmi Bomb. Starring Akshay Kumar and Kiara Advani, Laxmmi Bomb is a remake of the Tamil film Muni 2: Kanchana. A while back, the poster of the film was released in which Akshay was seen with Kajal in his eyes. Now, the Khiladi Kumar seems to have vowed to impress audiences with his versatility and took to social media to share the first look as Laxmmi from the film.

In the poster, we can see Akshay clad in a red saree with makeup and a bindi on his forehead. With an intense expression on his face, the Khiladi bowed down to his inner goddess to step into the shoes of a female. The story of the Tamil film revolves around a man who is afraid of the supernatural powers and is later possessed by the ghost of a transgender, Laxmmi. Later, the fun begins and it leads to hilarious situations in his life.

Akshay shared the look on social media and captioned it, “Navratri is about bowing to the inner goddess and celebrating your limitless strength. On this auspicious occasion, I am sharing with you my look as Laxmmi. A character I am both excited and nervous about... but then life begins at the end of our comfort zone... isn’t it? #LaxmmiBomb.” Akshay has been shooting for the film in Mumbai and is often snapped on a jetty while leaving for the shoot. Earlier, there were some issues with the director of the film. But, later they were resolved and Raghava Lawrence was back in the film. Laxmmi Bomb is being directed by Raghava Lawrence and is produced by Shabina Khan and Tusshar Kapoor. It also will star Kiara Advani. Laxmmi Bomb is slated to release on Eid i.e, May 22nd.