In a career spanning nearly four decades as an independent choreographer, Saroj Khan worked with all the major actors to become a legend in her lifetime. 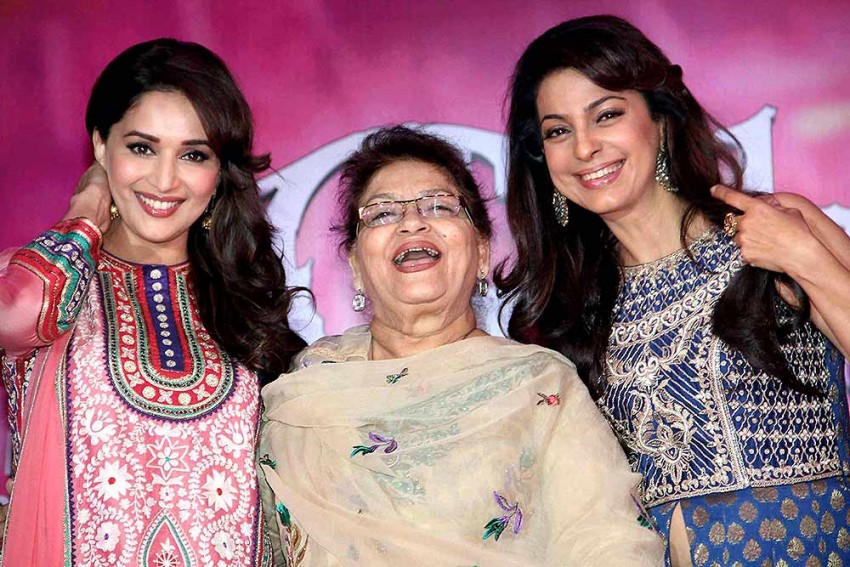 In this file photo, Bollywood actress Madhuri Dixit, Juhi Chawla and choreographer Saroj Khan (C) during a promotional event for their upcoming movie Gulaab Gang in Mumbai. Khan died early on Friday, July 3, 2020 morning due to cardiac arrest. She was 71.
PTI Photo 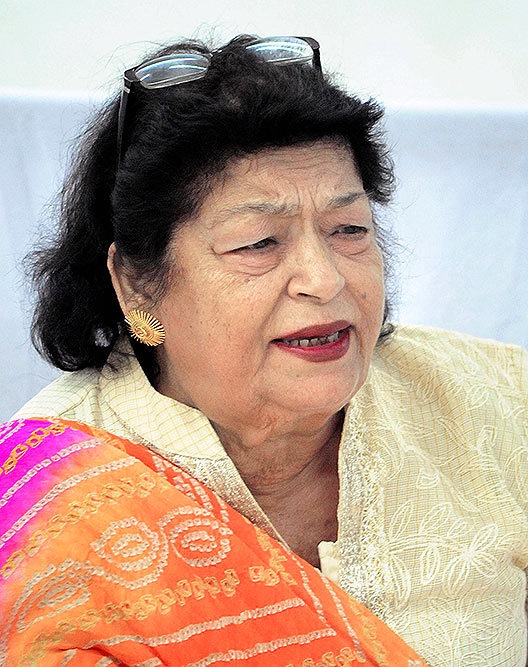 In this file photo, Bollywood dance director Saroj Khan teaches dance steps to students during a 12-day workshop, in Sangli. Khan died early on Friday, July 3, 2020, morning due to cardiac arrest. She was 71.
PTI Photo 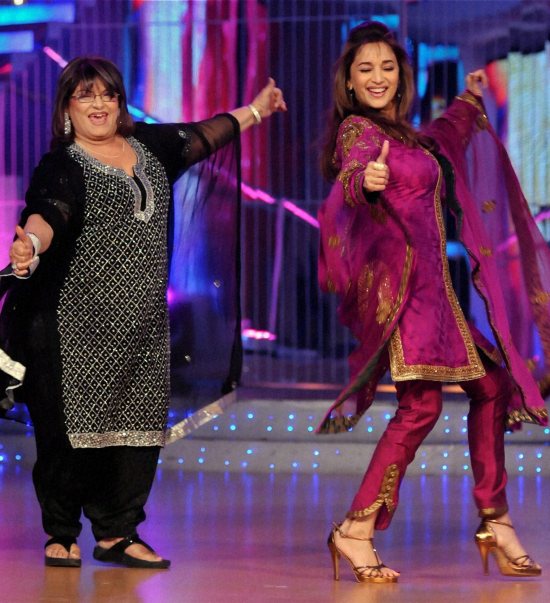 Actress Madhuri Dixit and choreographer Saroj Khan on the sets of a TV reality show on dance in Mumbai.
PTI File Photo 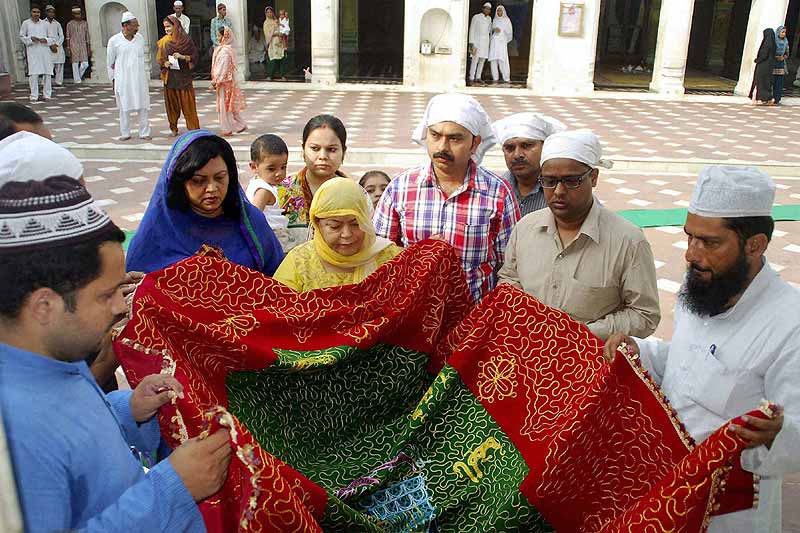 In this file photo, choreographer Saroj Khan can be seen offering a ''chadar" during a visit to Khanqah-e-Niyajiya shrine in Bareilly.
PTI Photo 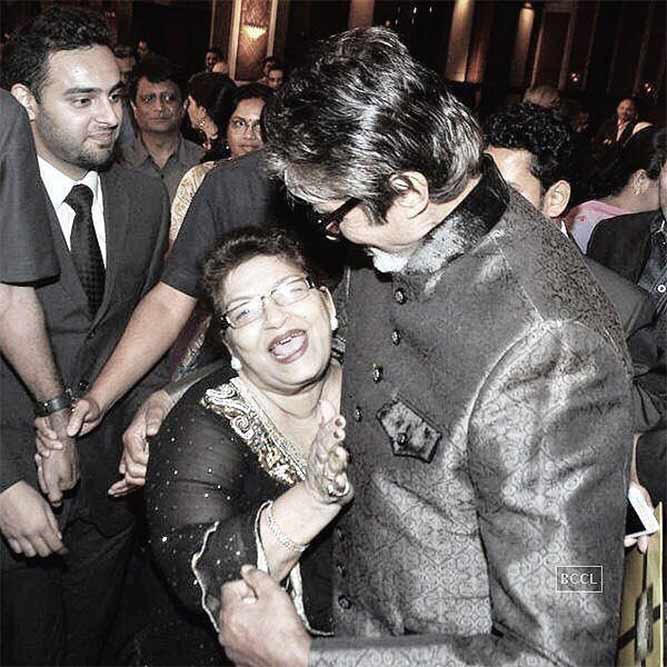 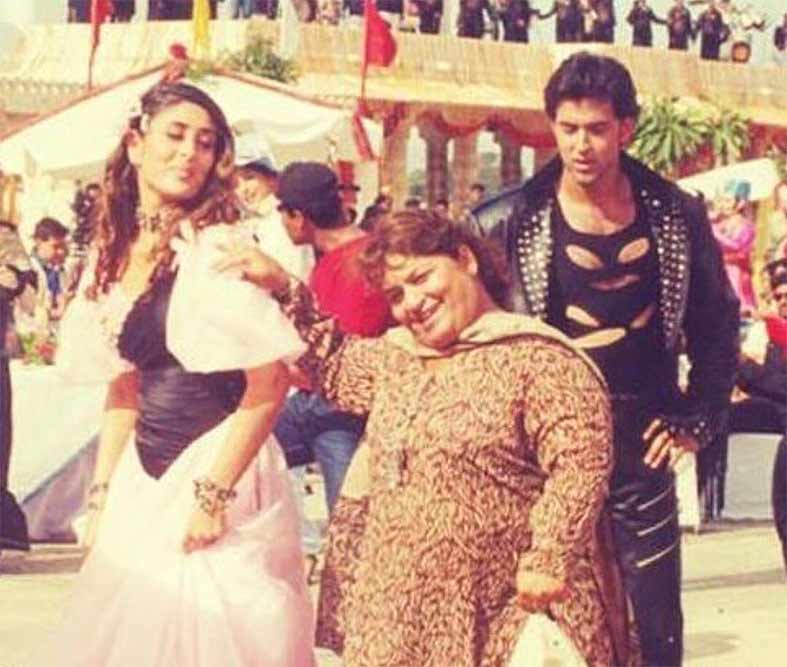 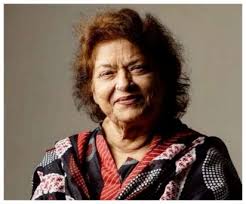 Saroj Khan, the nimble-foot genius who made generations of Bollywood stars, including those with two wooden feet, dance to her tunes was the first woman choreographer in Bollywood who broke the glass in a highly competitive field, otherwise dominated by men, to reach the top.

Khan, who passed away at 71 in Mumbai after a long and eventful career, played a big role in shaping the destiny of two of the biggest female superstars of their times—Sridevi and Madhuri Dixit—by choreographing some of their biggest musical hits at the peak of their career in 1980s and 1990s. Her choreography for Sridevi in smash hits like Main Teri Dushman in Nagina (1986), Hawa Hawaaii and Kaate nahin kat-te din in Mr India (1987), Naa jaane kahan se aayi hai in ChalBaaz (1989) Chandni o meri chandini in Chandni (1989) and Morni in Lamhe (1991), established both the actress and the choreographer in the numero uno positions in their respective fields.

Born Nirmala Nagpal, the winner of three National Awards continued her dominance with the emergence of Madhuri Dixit as a worthy successor to Sridevi with hits like Ek do teen in Tezaab (1989), Dhak dhak karne laga in Beta (1992), Choli ke peeche kya hai in Khalnayak (1993) and Didi tera devar deewana in Hum Aapke Hain Koun! (1994). Their astounding collaboration continued in the new millennium with Dola re dola in Sanjay Leela Bhansali‘s Devdas (2002) and more recently in Tabaah ho haye in Kalank (2019).

But it was not merely Sridevi and Madhuri Dixit with whom she excelled.  In a career spanning nearly four decades as an independent choreographer, she worked with all the major actors—from Amitabh Bachchan to Govinda and Shah Rukh Khan to Shahid Kapur— to become a legend in her lifetime.  After joining the industry in the 1960s as a background dancer, Khan got her big break in Geeta Mera Naam (1974) and caught the attention of the industry.

She did not look back, although it was a difficult time to make an impact for a woman choreographer at that time since most of the male stars preferred to work with male dance directors only. Her ascendancy was also creditable considering the fact most of the popular actors of the era—barring exceptions like Jeetendra and Rishi Kapoor—were not dancing stars. Raaj Kumar, Manoj Kumar, Dharmendra, Rajesh Khanna, Shatrughan Sinha and many other top actors of the era could barely dance. The situation, however, changed in Bollywood with dancing stars such as Mithun Chakravorty and Govinda hitting the purple patch in the eighties. For nearly a decade and a half after the mid-eighties, it was virtually a one-woman show in choreography in Bollywood with films like Darr (1993), Baazigar (1993), Mohra (1994) Dilwale Dulhania Le Jayenge (1995), Taal (1999) and Hum Dil De Chuke Sanam (1999).

Despite being at the top, Khan faced a challenge in the nineties with the emergence of new-age dance directors like Farah Khan, who made her presence felt with the iconic Pahla Nasha in Jo Jeeta Wahi Sikander (1992) and Shiamak Davar, who refined choreography with his troupe in Bollywood by steering clear of the usual tropes. Khan, whose strength lay in the classical Indian dance moves, was soon overtaken by the younger lot in the new millennium. Though big filmmakers such as Sanjay Leela Bhansali and Subhash Ghai still reposed faith in her and she continued to excel in films like Jab We Met (2007), she lost her pre-eminent position in the noughties when corporates took over the industry.

Masterji, as she was lovingly called by the stars, was a stern task master who did not spare any top star if they made a mess of the moves taught by her on the sets. But none of them ever resented it because of her passion for her craft. Actresses such as Hema Malini, Sridevi, Madhrui Dixit or Meenakshi Sheshadri were trained dancers in their own right who rendered her task easy but it was to her credit that she made the likes of Sunny Deol dance with gay abandon onscreen despite all their limitations.