'Liger' Makers Release BTS Pics From The Set, Fans To Get First Glimpse Of The Film On December 31 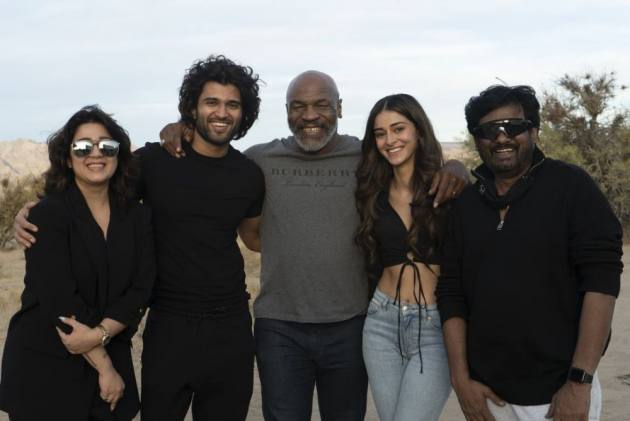 The creators of Vijay Deverakonda's 'Liger' aim to welcome the New Year by releasing behind-the-scenes stills from the film, as well as a special Instagram filter, this evening. Tomorrow, the makers will also release a first glimpse of the film.

Dharma movies took to Instagram to share two BTS stills from the film. While one picture shows Vijay Deverakonda focusing camera lens, the other shows Puri Jagannadh briefing the star about a scene to be shot. The special Insta Filter will also be unveiled today at 4 PM.

Take a look at the stills shared by makers here:

Yesterday, the makers released a video to make an announcement on Glimpse of the movie that will be out tomorrow at 10:03 AM. In the video released by the team, the voice-over hints at the release date of the first glimpse of the movie.

“Witness The Madness. Unleashing The Beast To The Nation… Glimpse On December 31st at 10:03 AM”, the message conveys.

Ramya Krishnan and Ronit Roy play important roles in ‘Liger‘, which is being made in Hindi, Telugu, Tamil, Kannada, and Malayalam.

Karan Johar's Dharma Productions is producing the film in collaboration with the Puri Connects label.

Puri Jagannadh, Charmme Kaur, Karan Johar, and Apoorva Mehta together are the producers.

The film’s producer Karan Johar had previously taken to Instagram to make the announcement about it’s release date. He shared a poster, which read: “Liger saala crossbreed. The pan Indian movie is ready to splash its blood, sweat and entertainment. Releasing in theatres worldwide on 25th August 2022. Catch a glimpse of the madness on 31st December.”