Love Story | An Affair With Divinity in Delhi

A visit to Nizamuddin Dargah for Thursday Qawwali soothed my grieving heart. When I think of love, I think of all the wonders of that night — filled with the colours of 'Ishq', the divine love of Sufis. 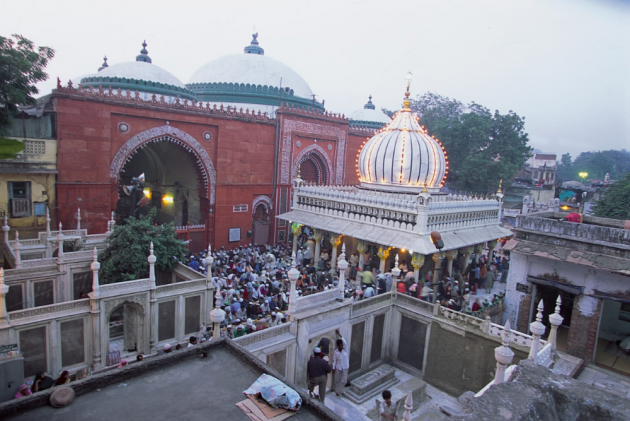 What is the colour of love? If you’d asked me this in 2016, I would’ve given you a list of clichéd answers, but today I’d answer differently. And it all changed that one night at Khan Market in Delhi. While I have lived in this city all my life, my first encounter with Hazrat-e-Dilli goes back to a dark chapter. An era that feels like a blur, a memory in flashbacks of sepia and Polaroid. Heartbroken and dejected by the world at large, I sought solace in its debilitation. I was no poet back then, just a naive observer of old things. I had begun to spend time in Khan Market — a place I had ignored for most parts of my life suddenly felt close so to home. On a mysterious Thursday, I crossed Faqir Chand & Sons while hurrying for ice cream when I overhead a tourist conversing with a local about the Nizamuddin Dargah (shrine). I don’t know what part of it intrigued me. I knew nothing about this place except that it appeared in Rockstar (2011). I remembered feeling enamoured by the splendour that was showcased, the burst of colours, the hustle and the meditative cognisance that it propelled — so it was decided in a matter of minutes that I was to visit this holy shrine. I convinced two of my friends to accompany me to watch the famous Thursday Qawwali sung by the very artists who sang Kun Faya Kun. Their excitement was quickly replaced with concern: Will we be allowed inside? To which I replied if Ranbir Kapoor can, so can we. Reluctantly, they agreed.

Before this, I looked at Delhi through the eyes of a historian; a city of magnificent chowks and gullies with open gutters, gumbads and bazaars, slums and mansions, new stories and old assuring you time travels that no science could ever crack. But amongst the numerous things ‘Delhi’, I simply couldn’t ignore the nazakat of this part of the city — a burst of chaos, pensive chaos, almost hypnotic, radiating in the narrow streets of Nizamuddin basti, the oldest living habitation of the city; the whiff of spices and soot, the sizzles of mutton nihari kebabs blended with the aroma of desi gulab and cheap (but lovely) ittar, with the lanes adorned with chadars and skullcaps at each stall, to serve as offerings at the shrine. There was a sense of music that could only be heard with the ears of the soul that would pull you even closer to your destination while it takes you back some seven hundred years. That moment, if Delhi were to be given a voice, she would say, I am a ghazal scribbled on a slate board, alas, the iterations of all the artists that have meddled with my verses; read me and I promise you a heartbreak. To this day, it is hard to describe the feeling, standing at the dehleez (threshold) of the Dargah of Hazrat Nizamuddin Auliya of the Chishti Tariqa (order), maybe this is what felt so…so Sufi? An emotion of poetry that I was so alien to, now diffusing my skies. 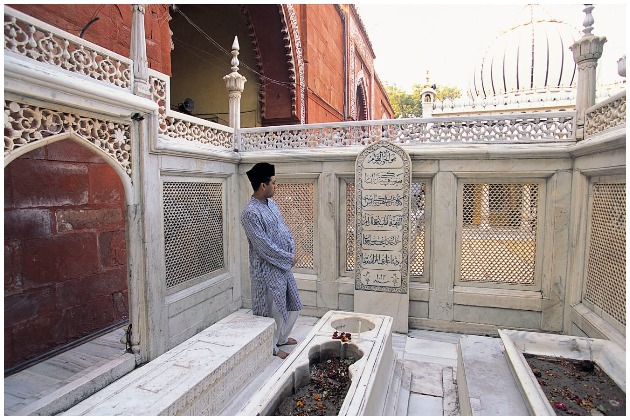 Love Story: That's How We Date

Finding Love In The Midst Of Algorithms, AI And Peach-Flavoured Strawberries

Love Story | The Girl Who Gave Her Heart Away

The mystics were finally taking over: I was spellbound by the very airs I had just tasted. I knew nothing about what I was doing and where I was going as I stood right in front of a red stone structure with lattice walls around it. Here, people tie a dhaaga (thread) in hopes that their wishes would be granted. My friends and I, clueless, went with the herd. I stood there to pray when a man approached us and asked me my name. I would be honest: I was afraid that I had done something wrong to offend the sentiments of the devotees. I fumbled, N…noor…priya. The kind man from the Dargah committee gently smiled and began to guide us on our way around the premises. “His greatest devotee, Hazrat Amir Khusrau, the prodigal poet and the music ustaad (maestro)”, passed away in mourning, six months after his mentor Hazrat Nizamuddin Auliya and was laid to rest here, right at his feet. Legends say that their profound love, away from the earthly sensibilities, was such that Khwaja ji himself asked Khusrau to be buried next to him as Islamic laws prohibited the sharing of graves. And then, a sudden realisation dawned upon me. I knew why I was called here by something I couldn’t explain. A story of love, like no other, I was bound by commonalities of emotions, the feeling of brokenness, of Hazrat Khusrau. And so, as the people began to gather for qawwali, a spiritual concert or sama (listening), I sat facing Khwaja ji, Mehboob-e-Illahi (beloved of Allah), in all his glory.

(I, Khusrau, play the game of love with my beloved

If I win, the beloved is mine, defeated, I belong to my beloved)

The concept of love in Sufism goes beyond the realms of understanding, where the heart and soul are aligned like constellations, a journey towards the holy communion, when material wonders are worthless and all that ever mattered and all that ever was is the destination of oneness — the Love for God himself. Sufism teaches that the highest form of service is that of mankind; to be the facilitators of happiness. Nizamuddin Auliya always said, God favours those who help the broken-hearted and thereon begins the journey.

In Sufism, the love poems are written from the eyes of a (unrequited) lover to his Beloved, his Piya that is God himself, implying the union of ‘divine love.’ And, the concept of rang or colour, has a special significance, in terms of its magnificence, attributing to the synergy of the Divine with the Lover where the seeker is imbued in the hues of love, in exaltation, in his quest to attain what it seeks.

In a beautiful verse, Amir Khusrau expresses the ‘oneness’ between the Lover and the Divine as ek rang:

[Khusrau (the bride) spends the eve of her wedding

Awake with her beloved, (in such a way that)

The body belongs to her, but heart to the beloved,

The two become one (colour)]

On returning from his rendezvous with Nizamuddin Auliya, Khusrau wrote this poem, telling his mother about how he has found the ideal mentor or spiritual guru. Here rang is the instigation of the rooh, like the engines of spirit igniting, and travelling on the path to Divine Love. He says:

(What a glow everywhere I see, Oh mother, what a glow;
I’ve found the beloved, yes I found him,
In my courtyard;
I have found my “pir” Nizamuddin Aulia.
I roamed around the entire world,
looking for an ideal beloved;
And finally this face has enchanted my heart.
The whole world has been opened for me,
Never seen a glow like this before.
Whenever I see now, he is with me,
Oh beloved, please dye me in yourself;
Dye me in the colour of the spring, beloved;
What a glow, Oh, what a glow.)

Perhaps, one is only a metaphysical epiphany away from realising the power of divinity, I realised sitting there, in the presence of grandeur. Now, as Nizami Bandhu began performing in the khanqah (hospices), it was a feeling of being seated in the centre of gravity. An ecstatic force enveloped the devotees, their heads covered, hands cupped or folded as they subsume in the piety brewing in the aura. It was celestial, the scene, how the qawwals managed to intensify the spiritual alchemy concocting in the air.

At first, it was overwhelming; there was a hesitance to completely meld into the surroundings. I had, unknowingly, tied myself down and suddenly felt the tightness of proverbial ropes dampening my spirits. And just when I had had enough, it was time to pull them out from the very roots, and take a baby step towards what was calling.  A euphoric state of mind where everything goes out of focus, all the people around vanish, the music — deafening to your ears, and there remains only you, in absolute devotion, your eyes mesmerised, with tears trickling down your face. Your brokenness has finally been touched, the vehicle for the healing process has finally been instigated and there is only looking forward now. And you might be snivelling but it doesn’t matter who is around to see, nothing else matters except this feeling because the divine doesn’t judge, it only asks you to love purely. And so, when we begin to slowly uncover the very foundation; the veil of smog has finally lifted, the eyes see what had always been in front, now, with the only element that was lacking, a spiritual vision.

Eyes affixed to the skies above, the bedazzling yellow lights adorned on the bulbous dome, a metaphor for faith and lotus crest mounted on top, Khwaja ji’s noor (light) could itself be experienced, glimmering brighter than the dome.

On my journey back home from the dargah, everything had changed. I was not the person who had just gone on an expedition with her friends, I felt strange but relieved like a piece of glass had been taken out from my wound, that things hereon would never be the same. I had bathed in spirituality, in the colours of ishq. When I think of love, I think of all the wonders that unfolded that one night: I think of that green chadar covering Nizamuddin Auliya’s shrine that hugged my grieving heart. And, as for my perspective, the Dehli I now knew was of Sufis and Signs (from the Universe), of music and mehfils, of poetry-in-motion — that always belonged to those who loved, and the greatest of them all, Hazrat Nizamuddin and his devotee, Hazrat Amir Khusrau.

(Noorpriya Chawla is a lover of Delhi, poetry and all things cosmos. Her rambles can be found on @thatzanygirl and her new audio show, Love Voice Notes)