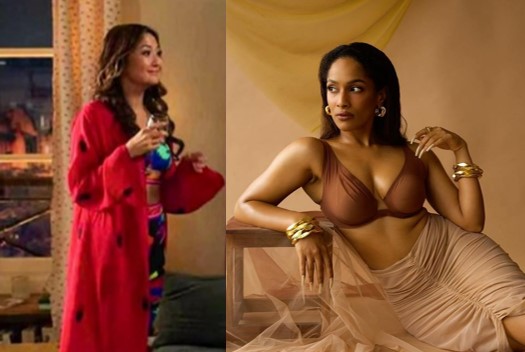 Fashion designer Masaba is known for her tailor-made designs for dynamic style needs across the globe. Her brand, House Of Masaba, is known for its perfect amalgamation of traditional and contemporary values. The Indian brand has a massive international appeal, and it has now made it to a prestigious international show on Netflix.

Just recently, the second season of ‘Emily In Paris’ saw Mindy Chen (played by actress Ashley Park) donning Masaba's Red Tribal Mask Maxi Jacket. Released on December 22, the show boasts a huge fan following across the globe. And watching Masaba’s creation take centre stage in the show's styling is a proud moment for all her fans. Ashley Park paired the long red jacket with printed yoga pants. The bold black motifs on the shrug were the highlight of the ensemble. The actress kept her hair loose and opted for a casual vibe.

Talking about the same, Masaba says, “Given its Parisian and chic aesthetic sense, ‘Emily In Paris’ is a trend book for fashionistas. It is a widely watched show globally and I’m so happy to have the lead Ashley Park wear one of my designs.”

Meanwhile, Masaba has also launched the new Autumn-Winter 2021 Collection where she took inspiration from traditional Kashida embroidery and South gold. She is also going to be seen soon in the second season of ‘Masaba Masaba’ on Netflix. The first season of the show was massively successful on the OTT platform.