Music composer S Thaman also opened up on the reports around American singer Britney Spears being part of the film. 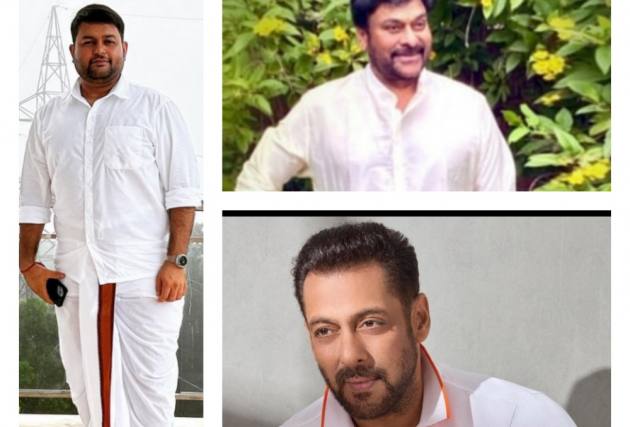 Music composer S Thaman has his schedule packed with the music for much awaited films such as 'Bheemla Nayak', 'Sarkaru Vaari Paata', 'Akhanda' and megastar Chiranjeevi's upcoming film 'Godfather' amongst many more. In an excluive interview with Outlook, he reveals that Bollywood actor Salman Khan will be shaking a leg for the first time with Telugu megastar Chiranjeevi in 'Godfather'.

Addressing the reports around American singer Britney Spears singing in the film, he says discussions are still going on and things have yet to be finalised.

Thaman tells us, "We are approaching the start of the thing. It is just on the starting lines. We are making the documentation strong before going and approaching. We still don't have proper clarity on making her (Britney Spears) sing a Telugu song or doing a proper English song for the film. There is Salman Khan sir and Chiranjeevi sir dancing together, so that is going to be really big for us.

'Godfather' is the Telugu remake of 2019 Malayalam film 'Lucifer', which was directed by Prithviraj Sukumaran.

The ace music composer is confident that confirmation of having an international artist on board will happen before this year ends.

"Discussions are still happening but the approach is going good. So, I am going in December, and we are meeting the agents and clients. So, by the end of the year we will come to know about collaborating with us," he says.

Thaman has some of the biggest chartbusters to his credit. From Allu Arjun's 'Buttobama' in 'Ala Vaikunthapurramuloo' to 'Agadu' title track, he continues to be one of the most sought after musicians.

He entered Bollywood with Rohit Shetty's 'Golmaal Again' and later did 'Simmba'. Thaman, who worked with late legendary singer SP Balasubramahmaniyan for 26 years, is happy that he was posthumously awarded Padma Vibhushan on Monday.

However, he does feel that the recognition came in late for SPB, who died in 2020.

"It's too late for the legend," says Thaman. He adds, "We all humans, we don't celebrate our legends when they are alive. It's always the other side which we have to think about, how in 74 years of his life, he was still singing 10 songs per day. So, I think that was really great. The recognition given to him was a bit late but I am proud of our government and our people. He deserves more for his contribution to the film fraternity."

Going down the memory lane, Thaman recalls working with SPB.

"I started at the age of 11. It has been 26 years of travel with him and done more than 3000 or 4000 stage shows with him all over the world. Me and Shiva Mani Garu. So, I am like the third child of SPB sir. He always treated me like SP Charan and Pallavi akka (elder sister). He looked after me like that. I was closely watching Bala sir for a long time. He was a great person. He didn't have any organs in his body except a great heart and a great voice. He was a man who used to always shower his blessings, give love to people who would come and meet him. He had great energy and was a very motivating person," says an emotional Thaman.

He adds, "At the age of 74 he sang for me in 'Disco Raja' and it did such a great thing for me. Basically he sang only three songs for me because I was always so scared about my music. He sang only 3 songs for me because I was confident only about making Bala garu sing in those songs. The way Illayraja and A R Rahman Garu celebrated Bala garu, nobody did. Others also did but I feel these two really did in the best way. I really miss him a lot. I was so happy to see Charan accept the award and had tears in my eyes."

Talking about what went behind conceptualising the track, he says,"We wanted to have a very hip hop Shiva number. A very EDM-ish Shiva trance number. This song comes before the climax, so it should have that vibe and it has Balakrishna garu. The song is very big and the size of mass following is very big. So, we had to do all these calculations. We know the content and story of the film, so we decided the tempo accordingly."