Farhan Akhtar, who played the role of the legendary sports icon in his biopic ‘Bhaag Milkha Bhaag’, spoke about him in an exclusive interview with Outlook’s Eshita Bhargava. 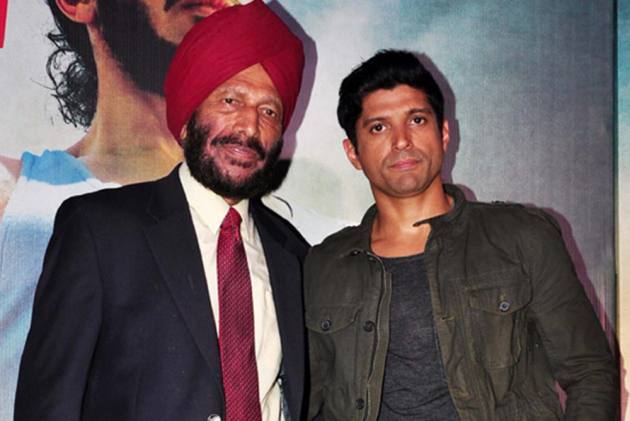 Iconic sprinter Milkha Singh passed away on June 18 due to post-Covid complications. He was 91 years old. Farhan Akhtar, who played the role of the legendary sports icon in his biopic ‘Bhaag Milkha Bhaag’, spoke about him in an exclusive interview with Outlook. He recalled their first meeting and how Milkha Singh touched his life.

Farhan quite vividly remembers the first time he met Milkha Singh, "While I was training for the biopic 'Bhaag Milkha Bhaag' in Mumbai, I met him for the first time. We shared a wonderful time."

Farhan Akhtar says one of the lessons he learned from his interactions with Milkha while preparing for the role was how to never give up. Farhan, who feels lucky to be a part of Milkha's biopic says, "I don't know who exactly to thank but to every single person that played a role in that story, script, and character finding its way to me, I'm eternally grateful to all of them."

He adds, "It's a very special story and to represent somebody who roars out of really the worst possible circumstances, who created an identity with his sheer will and determination, working harder than anybody else, who didn't have a place to stay and nothing to eat for a while, he didn't have shoes to wear -- to rise from there to be considered as India's most legendary athlete is remarkable."

While talking about portraying Milkha's life in the film, Farhan tells us, "If we look at the two polar ends of that journey, there is so much that even this film could not show you."

Farhan mentions that to him Milkha was an inspiration and people of all generations resonate with him. "His story is so universal because you need to believe in yourself first. He was a very special kind of person, he believed in himself, he believed if you worked with honesty and purpose, you would succeed."

"If we have to take away one lesson from his life it will be that if you want to achieve something, you must fight for it, strive for it. A person should work hard as he did. He has strived for every achievement, and he deserved it. He built his fortune. His life teaches us that hard work and perseverance can get you wonders," says Farhan while talking about things he managed to learn from the legendary athlete.

Farhan was amazed and in awe after seeing Milkha speak to all the athletes who were training at the track when he came to meet him for the first time. "There was such electric energy when they heard that Milkha ji had come, they all came to see him and seek his blessings. He took time out to speak to each one of them, learn about their discipline, gave them tips, spoke to them about the importance of working hard. He had things to do in the day that I was aware of, but he took time out for everyone. That was what was amazing about that man."