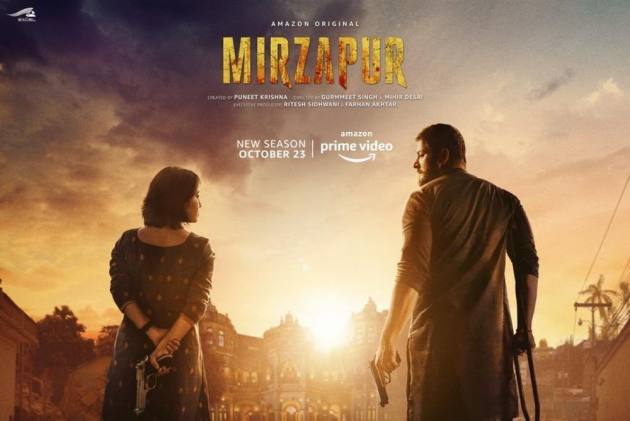 The primary cast of Amazon Prime Video's "Mirzapur 2', including Pankaj Tripathi, Ali Fazal, and Shweta Tripathi Sharma on Tuesday shared details about the much-anticipated second season of the crime drama, which they believe has been made special by the sustained love from the audience.

Set in Mirzapur, the first season of the show took the audiences in the dark world of guns, drugs, and lawlessness.

Fazal, who stars as trigger-happy Guddu, credited the audience for keeping the show relevant since its release in 2018.

"All the characters have been constructed beautifully while ensuring that the story moved forward. It becomes hard in part two to top (what you've done). But the audience has kept us in the news for the past two years. That has been a pleasant surprise," Fazal said.

Divyendu said the show's fans ensured that the "hangover" of season one continues.

His character, the emotionally volatile Munna Bhaiya, has been an audience favorite and a constant presence in the meme-world on social media.

"Every day there is a new meme, a new thing in the news. No matter how subtle we try to play its success, our audience didn't let us. They told us every day how much they loved the show, which meant a lot to us," the actor said.

While the show gained immense popularity for all its lead characters, Tripathi, whose character Kaleen Bhaiya runs an illegal arms empire in Mirzapur while using his carpets business as a front, could only watch the show during the lockdown.

"I am usually critical about my work. Though I saw some flaws of mine and I don't like to blow my own trumpet, I realized we have indeed made a brilliant show," Tripathi said.

The "Stree" star said his character became so popular he had to often remind people that his real name wasn't Kaleen Bhaiya.

"The character has given me so much that I feel even at the airport my boarding pass will be printed as Kaleen Bhaiya! People look at me and call me by the character and I have to explain them that it's not my name," the actor said.

The series is produced by Excel Media and Entertainment, created by Puneet Krishna and directed by Gurmmeet Singh and Mihir Desai.

While season two aims to play out on a bigger canvas, it also amplifies the show's crux: violence and revenge.

Sharma said her character Golu has undergone a transformation with season two.

"Golu from season one to two has been made to challenge her own beliefs after people close to her were brutally taken away. She has so much angst, revenge, and fire within her, she is no longer aware of the right or wrong. She does what she feels like now," the actor said.

Aparna Purohit, Head of India Originals, Amazon Prime Video, said with "Mirzapur" the team was sure they were "onto something very exciting."

"Every script that we read, every edit that we watched, we knew that this show is going to connect, that we are building something that will span multiple seasons. And of course, when you have crazy fandom like this show has, it only reaffirms that we had made the right decision for our audiences," Purohit said.

Ritesh Sidhwani, Producer, Excel Entertainment, echoed Purohit's sentiments and said the show could have come earlier had it not been for the coronavirus pandemic which delayed their release.

"Mirzapur 2" is set to premiere on October 23 while the trailer of the show is out on Youtube.