This Ayushman Khurana-starrer makes you think, pause and ponder as an audience as to why the fundamental right of equality as enshrined in the Constitution under Article 15 remains a distant dream even after 72 years of independence. 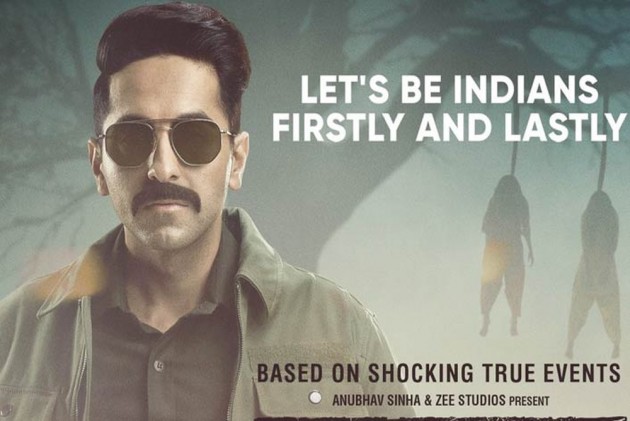 Still reeling under Kabir Singh’s toxic masculinity? Well, here is a movie that can help you detox. Article 15 is a hard-hitting, in-your-face kind of movie, which not only holds a mirror to society but also exposes some bitter truths about the sharp divide on the caste lines in our country. It makes you think, pause and ponder as an audience as to why the fundamental right of equality as enshrined in the Constitution under Article 15 remains a distant dream even after 72 years of independence.

Based on true incidents, including Badaun gangrape, Article 15 is a story about a young IPS officer Ayan Ranjan, who is posted as an ASP in Lalgaon, a godforsaken place which he thought never existed in modern India while he studied in Europe. The first case that greets him on arrival leaves him shocked and stirs his conscience. Two gang-raped Dalit girls are found hanging from a tree and the third one goes missing, but his corrupt and caste-conscious subordinates in the local police try to pass off the heinous crime as a routine affair. How the idealist police office sets out to crack the case against all odds and ensures justice to the most marginalised people is what Article 15 is all about.

Performance wise, Ayushmaan Khurrana is as usual fabulous. He is raising the bar with each of his out-of-the-box outings. In this film, he has come up with a refreshingly understated and nuanced portrayal of an upright and sensitive cop, who is unlike the stereotypical, over-the-top, Dabangg (2009) kind of police officers Bollywood routinely unleashes on the audience. But he is not the solitary star in this film. He is ably supported by a bunch of talented co-actors such as Manoj Pahwa, Kumud Mishra, Nassar, Zeeshan Ayub and Sayani Gupta. The cinematography, background score and dialogues are all excellent.

But Article 15 truly belongs to its director Anubhav Sinha, who has done a remarkable job by making an engrossing and thought-provoking movie out of such a sensitive subject, without making it preachy or didactic. After his brilliant Rishi Kapoor-starrer "Mulk" last year, which was based on the persecution of a patriotic Muslim man on religious lines, he has taken a giant leap forward with another socially relevant film on the deep-rooted discrimination on the basis of caste that still exists in society. It is hard to believe that the same director had been making all kinds of potboilers, including Shah Rukh Khan’s Ra.One (2011) all through his career until Mulk extricated from the commercial morass. He would do well never to return to his pre-Mulk days.

Article 15 is definitely a must watch for everyone, especially for the way its central theme of the rampant caste divide has been treated. Anyone who found Kabir Singh ‘s misogyny and toxic masculinity insufferable last week should head to a nearby theatre to detoxify himself.