Amitabh Bachchan does it yet again in Gulabo Sitabo grabbing the eyeballs by the force of his consummate performance despite the languid pace of the narrative. But that may not be enough for the film, considering the fact that it is a collaboration of the same team, which has delivered some immensely uplifting movies in the past eight years. 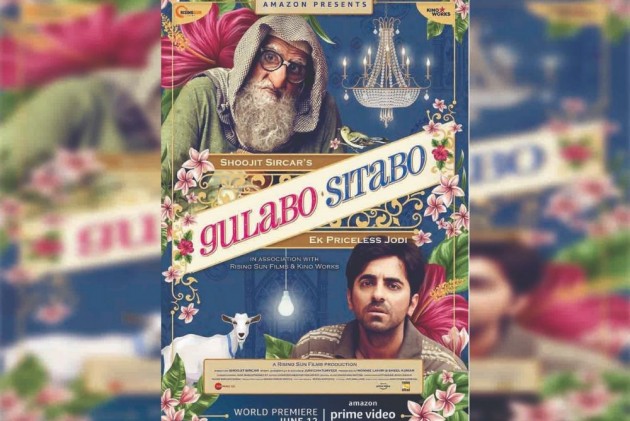 Amitabh Bachchan plays a hunchbacked septuagenarian in Shoojit Sircar’s latest Gulabo Sitabo and carries the burden of the film entirely on his shoulders. It should not come as a surprise to those who have followed his career trajectory over the past half a century. He has done it umpteenth time, making a film with the thinnest of a storyline riveting enough with his sheer presence.

The Zanjeer (1973) star does it yet again in Gulabo Sitabo grabbing the eyeballs by the force of his consummate performance despite the languid pace of the narrative. But that may not be enough for the film, considering the fact that it is a collaboration of the same team, which has delivered some immensely uplifting movies in the past eight years.

Sircar and screenwriter Juhi Chaturvedi have had one of the most fruitful associations in Hindi cinema in recent years with epoch-making movies like Vicky Donor (2012) and Piku (2015). Compared to their previous movies, Gulabo Sitabo -- now streaming on Amazon Prime Video --- is a bit of a letdown. Maybe the bar was too high for the duo this time because of the teaming up of Ayushmann Khurana, the poster boy of the content-rich cinema, with Bachchan for the first time Or, for that matter, they did not have a plot whacky and quirky enough, the USP of their previous projects. Worse still, they were simply complacent.

Bachchan in the film plays a 78-year-old Mirza in Lucknow, who is waiting for the demise of his begum (Farrukh Zafar), 17 years older to him, so he could become the owner of an old haveli called Fatima Mahal, which she has inherited from her ancestors. A few tenants, including Banke played by Khurrana, living in the dilapidated structure, play the spoilsport. Mirza tries every trick in the book to force them to vacate the building but they refuse to do so. The basic plot of Bachchan-Khurrana tussle over a property which neither of them actually owns in the city of nawabs had the potential to provide more mirth and mayhem but it meanders through a predictable and laboured pattern, ending with a tepid and rather implausible climax.

Bachchan is, of course, a marvel to watch as a naïve and miserly man, despite his prosthetics that make him look older than his age in the film. He infuses life effortlessly in the narrative from the very first frame to the last. Gulabo Sitabo truly belongs to him more than anybody else. Khurrana, playing a flour mill owner perennially frustrated over Mirza’s moves, is nowhere close to his best and his scenes with Bachchan could have been punchier. Others in the star cast, Farukkh Zafar as Begum, Brijendra Kala as lawyer, Vijay Raaj as archaeological department official and Shristi Srivastava as Khurrana’s sister are all excellent.

The problem with Gulabo Sitabo is not its characters. Characters alone do not make a gripping film. However interesting or lively, they need to fit seamlessly in an engaging narrative. Trying consciously to skirt the beaten path, some film-makers of the so-called content-rich cinema today appear to be forgetting the importance of the basic need for a few twists here and a few turns there in a movie plot. The makers of Gulabo Sitabo would have done well to work out a tighter screenplay with some standout moment.