Actor Naga Chaitanya is all set to make his B-Town debut with ‘Laal Singh Chaddha’, which also stars Bollywood actors Aamir Khan and Kareena Kapoor in the lead roles. 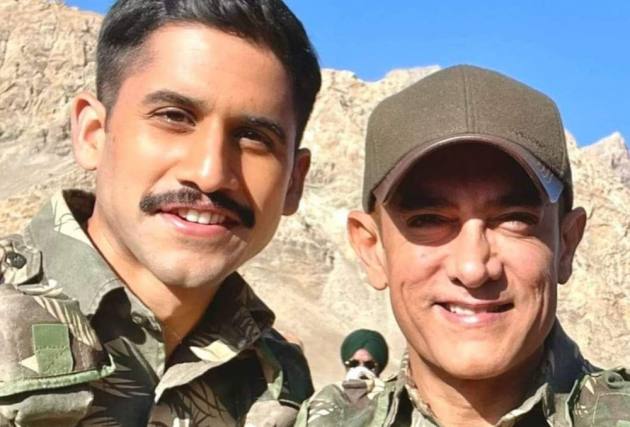 Actor Aamir Khan is known to be a perfectionist, and whoever he picks to be in his movie has some genuinely founded reason to be there. His upcoming movie ‘Laal Singh Chaddha’ will see the Bollywood debut of Telugu superstar Naga Chaitanya, who is the son of actor Nagarjuna and the husband of actress Samantha Ruth Prabhu.

Talking about how the movie came about Chaitanya opened up while talking to a leading portal that it was all very organic. He didn’t even know that such a thing would happen to him. He just happened to get a call one day from Aamir Khan, and after the initial discussion, he came down to Mumbai for a detailed discussion and heard the entire story and narration. He was mighty impressed with the role that was offered to him, and he immediately said yes.

He joined Khan and the other members in Ladakh in July for the shoot. From what sources suggest, Chaitanya will be playing the role of Khan’s friend, who is always by his side for any help whatsoever.

For the unversed, ‘Laal Singh Chaddha’ stars Kareena Kapoor as well, who plays Aamir’s love interest in the movie. The film is being directed by ‘Secret Superstar’ director Advait Chandan, who earlier directed Khan in his debut directorial. He has also been a manager to Khan for a really long period of time. Also, it has been written by none other than Atul Kulkarni, who is a great friend of Aamir Khan. The two have worked before in films like ‘Rang De Basanti’, and it is said that Kulkarni had discussed the story with Khan back then in 2005-06. However, they got to make the movie only a couple of years back.

On the work front, Khan was last seen in ‘Thugs Of Hindostan’ (2018), which went on to become a massive disaster at the box-office. He also did a small song cameo in ‘Koi Jaane Na’, which was directed by his good friend Amin Hajee.