‘Navarasa’ Review: Three Veterans And A Newcomer Save The Day

The intent of ‘Navarasa’ – to help cine workers hit by the pandemic - is praiseworthy but the content fails to live up to the hype. 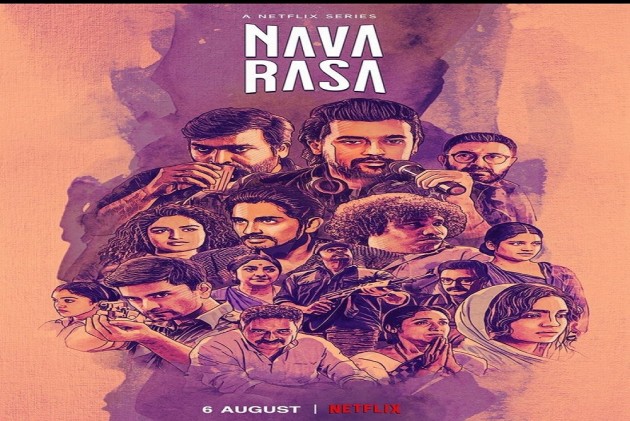 One expected a different viewing experience from ‘Navarasa’ after it was publicized as an anthology anchored by the famed Mani Ratnam and the talented director Jayendra Panchapakesan. But the end product is nothing but disjointed storytelling as the short films fail to lend gravitas to the nine emotions they set out to portray.

But for the three veterans – Priyadarshan, Vasanth Sai and Gautham Menon – the package would have proved to be a total disaster. The young directors like Bejoy Nambiar, Karthick Narain and Karthick Subburaj, who were supposed to showcase their out of the box narration have instead churned out shoddy films. In contrast, Arvind Swami is a revelation with his first directorial venture.

The first film ‘Ethiri’ (Enemy) is supposed to portray ‘Karuna’. Vijay Sethupathy in a moment of madness kills Prakash Raj whose wife Revathy has not spoken to him for ten years. The remorseful killer meets the widow attempting to explain his position and the lady forgives him. The scene where Vijay Sethupathy and Revathi meet at a temple reminds one of the famous scene from ‘Thalapathy’ by Mani Ratnam, who has penned this story as well. Directed by Bejoy Nambiar, Karuna gets defined as remorse and forgiveness after a vengeful act - but what it finally conveys is an unconvincing emptiness.

Thankfully Priyadarshan lifts us out of the morbid opening with his ‘Summer of 92’ and the king of comedy proves to be the right choice for ‘Haasya.’  Based on a true story in the life of Malayalam comedian Innocent Vareed Thekkethala (who also became an MP) and featuring Tamil’s present comedy superstar Yogi Babu, Priyadarshan stitches together an earthy fun filled throwback to the school days of a successful actor who returns as chief guest to a school annual day.

As Yogi Babu recalls how fate and events conspired to keep him nailed to class nine for four years, the laughter keeps rolling. And the last incident involves a dog (after emerging from a shit pond) that gatecrashes a lady teacher’s engagement rendering her an eternal spinster – and poor Yogi Babu is seething with guilt on learning his act was the culprit. But the teacher’s words prove a soothing balm, “If you had not failed ninth again you would not have gone on to become such a big film star. Only problem – even today we get the stench in the house.” The humour gets doused in sympathy in typical Priyadarshan style.

Karthick Naren’s ‘Project Agni’ is supposed to illustrate ‘Adbhuta’ (Wonder) and instead proves to be a mish mash of Christoper Nolan’s ‘Inception’ and ‘Interstellar’ including dialogues in English – this one requires subtitles in Tamil. Even the final twist can be anticipated easily if you know how Karthick’s climaxes work. Another big letdown was ‘Peace’ by Karthik Subburaj who proves that his recent disastrous Dhanush starrer ‘Jagame Thanthiram’ was no flash in the pan. He is having a really poor run since his ‘Iraivi’ and it is unbelievable that someone who initially made his mark through short films fails on the big stage for short films.

Director Vasanth Sai (the surname is a recent addition) proves that the tutelage under a master director like K. Balachander can never go waste as he adapts ‘Payasam’, the short story of T. Janakiraman (a Tamil literary legend) to show what ‘Bheebatsa’ (Disgust) means. One really feels disgust at the jealousy and resentment that veteran Delhi Ganesh exhibits during a wedding of his very successful nephew’s daughter. Ganesh proves yet again that he is one actor who can ace any role - in this case the bitterness and insecurity of a poor Brahmin from a small town. The sights, sounds and smells of a typical Brahmin wedding that used to be held at one’s sprawling homes are evocatively captured by Vasanth and his team.

Fear is what one is supposed to feel while watching ‘Inmai’ (Devoid Of) directed by Rathindran R Prasad. Rather than conveying the effects of the fear born out of guilt, which is the original premise of the story, the director depends on ‘Djinn’ and voodoo. There is even a spin around cancer turning dormant after an old man falls in love but relapses due to black magic. The visuals and art direction make this film just watchable.

Anger and revenge go hand in hand in our films and first-time director Arvind Swami (the actor) has spun this combo into a racy film. ‘Roudhram’ (Anger) tells the story of a poor mother forced to sleep with a money lender to support her son and daughter. On finding the truth, the son expends his anger on the man while the daughter takes it out on the mother. The way Arvind Swami flits between the past and the present, with anger of the two kids as the only common thread, heralds the arrival of a skillful director in our midst. Santosh Sivan’s visuals are another big plus.

‘Thunintha Pin’ (Being Courageous), though written by Mani Ratnam, fails to live up to the master’s caliber and the young director Sarjun KM is left holding the baby. A shoddily told police and maoist chase, this short film should compete with Karthik Subburaj’s ‘Peace’ for the wooden spoon.

Thankfully the finale – Sringara - belongs to Gautham Vasudev Menon, an old hand at telling love stories. And he doesn’t disappoint with his ‘Guitar Kambi Mel Nindru’ (Tugging at My Guitar Strings). A musical about a singer and his new found love get the Gautham Menon treatment with breathless dialogues, breathtaking close ups, a superbly matched lead pair warming up in an everyday informal set up. Suriya, looks refreshingly young while Pragya Rose Martin proves yet again Gautham Menon’s penchant for stylish and beautiful heroines who can also act.

Like most of Gautham’s previous heroes, here too Suriya loses his lady love – under what circumstances no one knows. But no one is complaining as the byproduct of this love story and its failure are some brilliant songs – music and singing by Karthik and lyrics by Madhan Karky.

The intent of ‘Navarasa’ – to help cine workers hit by the pandemic - is praiseworthy but the content fails to live up to the hype.  But for the four films by Priyadarshan, Vasanth, Arvind Swami and Gautham Menon, ‘Navarasa’ would have plunged into another feeling – boredom.