Actress Neha Dhupia in a recent interview revealed her 3-month-old son’s name and the name given to him by her daughter Mehr. 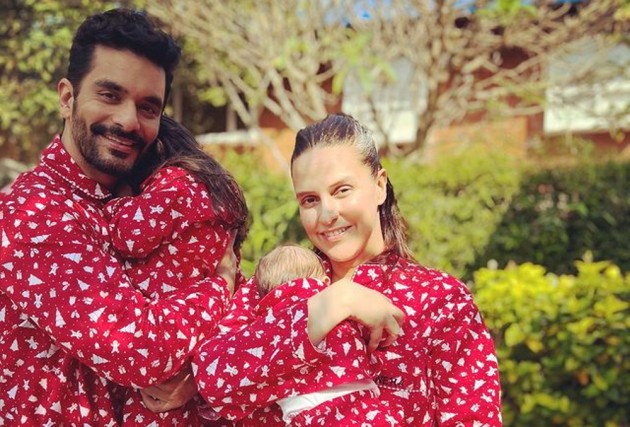 Bollywood actors and couple Neha Dhupia and Angad Bedi welcomed their son on October 3 last year. After three months the actress has finally revealed their son’s name. They have named him ‘Guriq Singh Dhupia Bedi.’

In an interview with the Hindustan Times, Dhupia said,  “We are happy and extremely proud that we attach both our names with our son and daughter’s (Mehr) name. There you go, three months later, now you know what we call him”.

Opening up about how beautifully her son reacts to the name, she said,  “I came up with the name, but when it comes to a child, it is always a combined effort. We are glad that we zeroed in on Guriq, because we love the sound of it. He (her son) also reacts beautifully to the name. He is just three months, and now he recognises sounds way more”.

Recalling the journey of finding the name, Dhupia said, “I stumbled upon the name, and the meaning was beautiful. We always wanted something that has a beautiful meaning and is a slightly unusual name. The most important thing was that both mom and dad had to come around it. Mom came around instantly and Guriq’s dad took a while to come around, but I’m glad he did”.

Dhupia further shared that while they have named their son Guriq, their daughter Mehr prefers to call him baby Koala.

“Before the delivery, when we were preparing Mehr that she would soon have a baby sister or a baby brother, she suddenly started calling the baby, Koala. Even now, she calls him that. That’s his pet name given by his loving sister. We also keep calling him, koala bear. We love it because she stuck by the original, and we came up with the name much later,” she said.On the work front, Dhupia was last seen in Vidyut Jammwal-starrer ‘Sanak’. She will be next seen in the movie ‘A Thursday.’ Bedi was last seen in the web series ‘Mum Bhai’ and is known for his role in the series ‘Inside Edge.’