In an exclusive interview with Outlook’s Eshita Bhargava, actor Pratik Gandhi and Shreya Dhanwanthary talk about working with the ace director Hansal Mehta, how OTT platforms are a game-changer for newcomers, and much more. 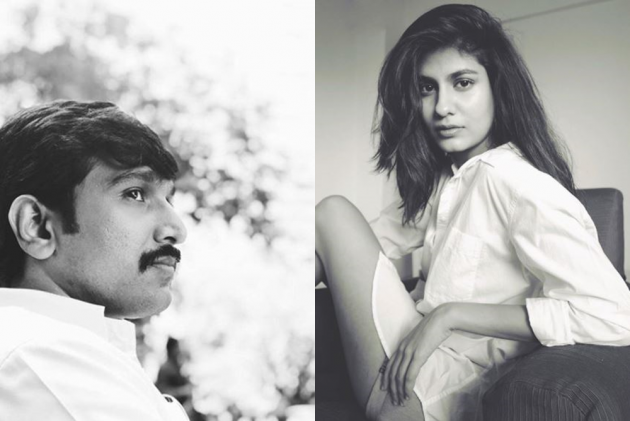 The much-awaited web series ‘Scam 1992: The Harshad Mehta Story’, directed by Hansal Mehta has released on SonyLIV. Based on the book ‘The Scam’ by Sucheta Dalal and Debashish Basu, the series explores the infamous Harshad Mehta scam.

In an exclusive interview with Outlook’s Eshita Bhargava, actor Pratik Gandhi who plays the character of Harshad Mehta and Shreya Dhanwanthary who will be seen essaying the complex role of journalist Sucheta Dalal in the series talks about working with ace director Hansal Mehta, how OTT platforms are a game-changer for newcomers, and much more.

“When I was first approached and told that the series would be based on the 1992 Harshad Mehta scam, I was thrilled,” Pratik tells us while talking about his character.

He adds, “Portraying a real-life character can be quiet challenging. Hansal Mehta helped me a lot in understanding the character. I remember the first day was so easy and smooth that I got confused if things are going fine or if I should ask someone to guide me.”

For Shreya, the web series has been an incredible experience.  She says, “We had a massive cast in the series – there are so many people who are integral to the story of the rise and fall of Harshad Mehta. We have tried to keep it as authentic and real as we could. Harshad Mehta’s family was from Gujarat and we had to have actors who could speak Gujarati fluently.”

“I hope people would think that I have also done a good job after watching the series,” she says expressing her nervousness.

Pratik, who has been a part of theatre ever since he was in school claims that it has helped him in preparing for such a complex role.

“My theatre experience has come handy while preparing for the role. Having said that, working for a web series was an all together with a new world. I have had multiple discussions with the writers and the director. I had to create Harshad Mehta’s ego, arrogance but nothing could look made up. It all had to appear natural on the screen. I gained 18 kgs of weight in none months to look like him.”

“My wife was taking care of me as if I was pregnant – I was asked to avoid walking, or do any work. I just had to sit and eat,” he laughs.

“It won’t be wrong if I say that I’ve grown up in the theatre and it has grown in me. In 2004, I shifted to Mumbai and started working in theatre, along with working for corporates for 15 years. That helped me a lot in creating a different character for multiple shows. I began working in Gujarati movies and I got noticed by many in Bollywood. It has been organic growth,” the actor tells us.

On the other hand, it was a responsibility for Shreya to portray Sucheta Dala. “It is massive when you are playing someone real, especially if that person is famous. Sucheta Dalal is just the first female financial journalist but has also won Padmashree Award for her work. She broke the 1922 scam news and that was huge. To play someone so accomplished was an absolute honour and I just hope I’ve done justice to that.”

“Hansal Mehta guided us throughout the shoot. He asked us not to imitate but make the character our own. We wanted to make sure that it all looks real. I read Sucheta Dalal’s articles, saw videos, and available footage to understand what was going in her head while breaking such big news. This helped me, a lot,” she adds.

Shreya, who was last seen in ‘Why Cheat India’ tells us that she has no expectations other than being liked by the audience. “I have no expectations – I am just looking forward to people seeing it and noticing me. I have given my heart and soul to the role and now just hoping it to work.”

Both Pratik and Shreya feels that OTT platforms are a blessing for the new actors. They say, “Actors have started getting more quality work. Not just that, artists from regional film and television industries are getting more exposure and can create something new. OTT platforms are so detailed and focus on a vast variety of topics.”

Pratik adds that now content is the new king, “Content is the only important thing when it comes to OTT platforms. Viewers are not any more concerned about who is in the movie but what they’ll be watching.”

The web series set in the Bombay of 1980s and 1990s also stars Sharib Hashmi, Satish Kaushik, among others.