Prabhas: Akash and Ketika's Chemistry In 'Romantic' Is Awesome 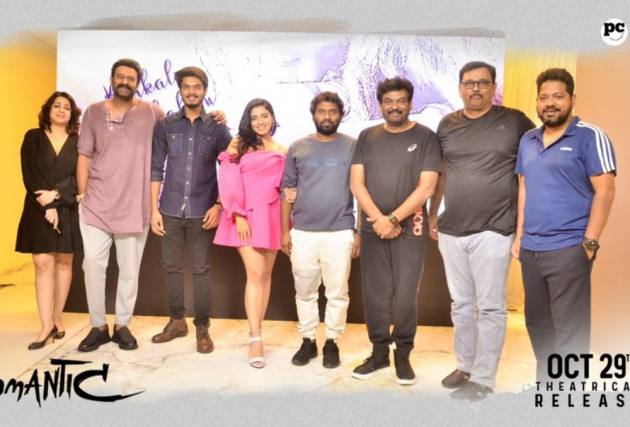 Telugu star Prabhas is all in praise of actors Akash Puri and Ketika Sharma after watching the trailer of their upcoming film 'Romantic'.
The 'Baahubali' star expressed his views after launching the trailer.
Talking about the young actors, Prabhas said, "The trailer is really good and the chemistry between Akash and Ketika is awesome. Akash had matured a lot as an actor. In Particular, he seems to be like an actor with ten years experience in that last shot."
The actor added, "Ketika is a very good choice. She looks lovable to the youth audience. I have known Anil Paduri (Director) for a long time. People who saw the film told me great things. I hope the audience will like it as well."

Fall Madly in Love with our #Romantic TrailerðÂÂÂÂ¤©

The movie also stars Prabhas's 'Baahubali' co-star Ramya Krishnan. He says that the seasoned actress has always been the star of every film.
"She is a great actress always. Even in 'Baahubali', she used to overshadow all of us," said Prabhas.
The trailer was launched in the presence of only the film's team and the actor on Tuesday. 'Romantic' is produced by Akash Puri's father Puri Jagannadh and will release on October 29.
Meanwhile, Prabhas launched a new poster of his own film 'Radhe Shyam' on Wednesday.  He will also be seen in multilingual film 'Adipurush'.