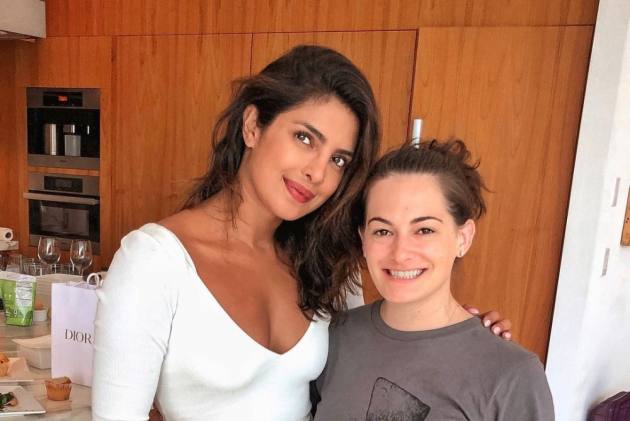 A previously unseen video of Actress Priyanka Chopra and chef Sami Udell doing an aarti together at her Los Angeles home has surfaced online. The video was uploaded by a fan group and is from last year's Diwali Lakshmi puja. Singer Nick Jonas, Chopra's husband, can be seen clapping while praying in the background.

Fans dropped compliments in the comment section. “So much love and respect for both Nick and Priyanka who always treated their friends and staff more like family. May God continue to bless these two beautiful souls with endless love and happiness together,” one wrote. "This is so sweet, to see how Sam take part in this pooja ceremony. They all love and embrace her culture and traditional so much," another said, while a third wrote, “This is purity.”

Chopra originally posted photos of the Lakshmi puja to Instagram in November of last year. She was dressed in a yellow saree and was spotted doing aarti with Jonas, who was clad in a white kurta-pyjama.

Chopra claimed on Victoria's Secret's VS Voices podcast last year that Jonas has accepted her culture and wants her to conduct pujas whenever they start 'something big.' “I do a lot of pujas in the house which are prayer ceremonies. Nick usually asks me to do them whenever we are starting something big because that is how I have always started something auspicious in my life, with a prayer of thanks. I have had that upbringing and he has had that upbringing and we have sort of created that within our family as well,” she said.

Recently, Priyanka Chopra was seen on the big screen in 'The Matrix Resurrections,' alongside Keanu Reeves, Carrie-Anne Moss, Jada Pinkett Smith, Neil Patrick Harris, and others. Her upcoming projects include 'Text For You,' 'Citadel' and 'Jee Le Zara.'