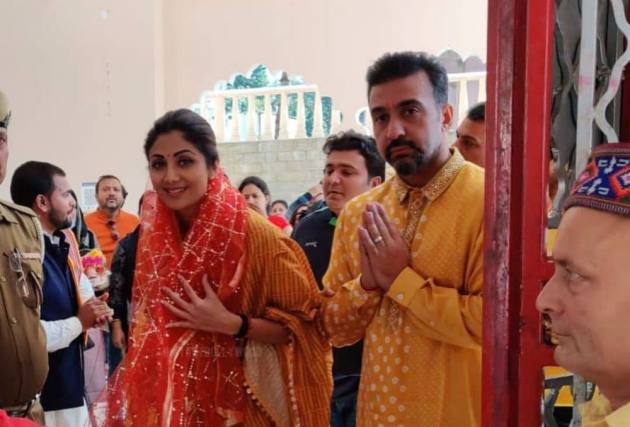 Bollywood actress Shilpa Shetty Kundra's husband Raj Kundra, who got bail in September in an alleged pornography case, has been maintaining a low profile since then. He also deactivated his social media accounts to avoid public attention. The businessman and his family took off to Himachal Pradesh for a vacation and Raj Kundra was snapped visiting a temple with his wife Shilpa Shetty Kundra.

The duo was seen twinning in yellow for the outing. Photographs of Raj Kundra’s first public outing post his controversial arrest are going viral on the internet. In the pictures, the actress can be seen holding Raj’s hand as they enter a temple.

Shilpa  Shetty Kundra has been constantly sharing photos and videos from her trip that also featured her kids Vivaan and Samisha. However, she shared no photos of Raj Kundra on her Instagram.

On November 1, it came to notice that Kundra went off social media. The businessman was inactive on Twitter and Instagram ever since his arrest in a porn-related case. Kundra was indicted for producing and streaming adult videos. He was booked under several sections of the Indian Penal Code, including the Information Technology Act and the Indecent Representation of Women (Prohibition) Act.

So far, Shilpa Shetty Kundra has just given one statement on the case. The actress said that she was a ‘proud law-abiding Indian citizen.’

She also stated that she was being objected to ‘unwarranted aspersions’ cast on her by the media and others. She requested everyone to respect her family’s privacy for the sake of her kids Viaan and Samisha.