The showcase featuring ‘The Master’s Words’ collection and film ‘The Search’ was a mix of fashion, theatre and film curated to bring alive a retro vibe. 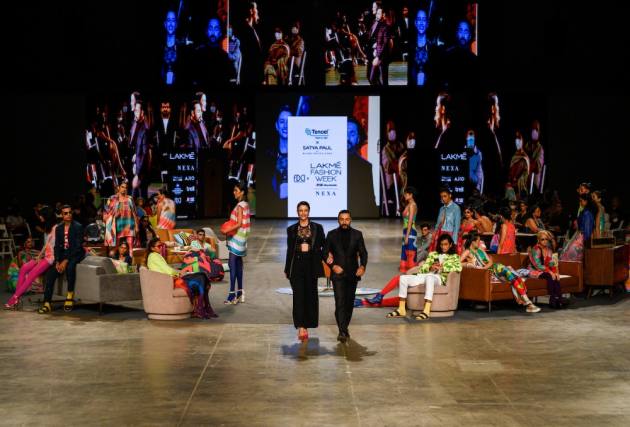 The Master’s Words” was the finale of Sustainable Fashion Day that paid tribute to the legacy of the late Satya Paul, and the entry of Carbon zero TENCEL™ branded fibres in India.This show was the finale of the Sustainable Fashion Day at the FDCI x Lakmé Fashion Week. The colourful and sustainable collection titled, “The Master’s Words” paid tribute to the late Satya Paul who passed away earlier this year and also launched the revolutionary Carbon zero TENCEL™ fibers. 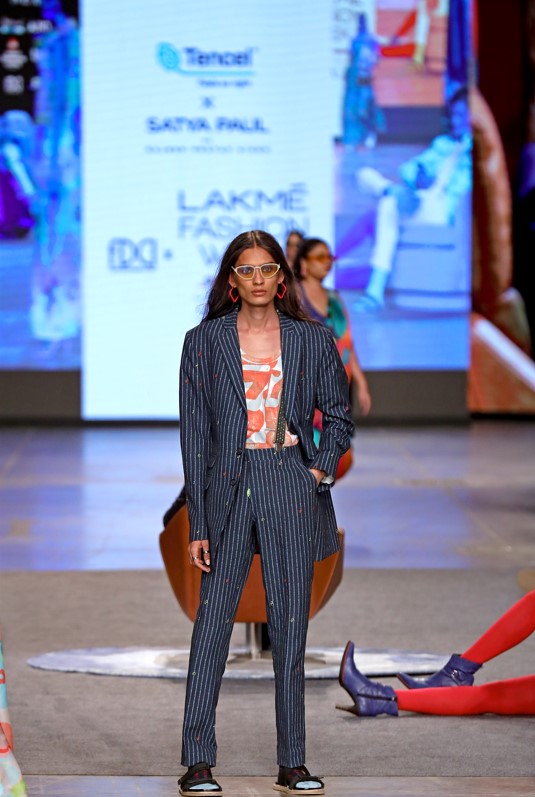 As a brand, Satya Paul has echoed sustainability over the years and experimented with a range of fabrics. The upcoming ready-to-wear collection in association with the Carbon zero TENCEL fibers by Lenzing was a stride in this direction and addressed the growing demand around circular fashion and carbon neutrality. 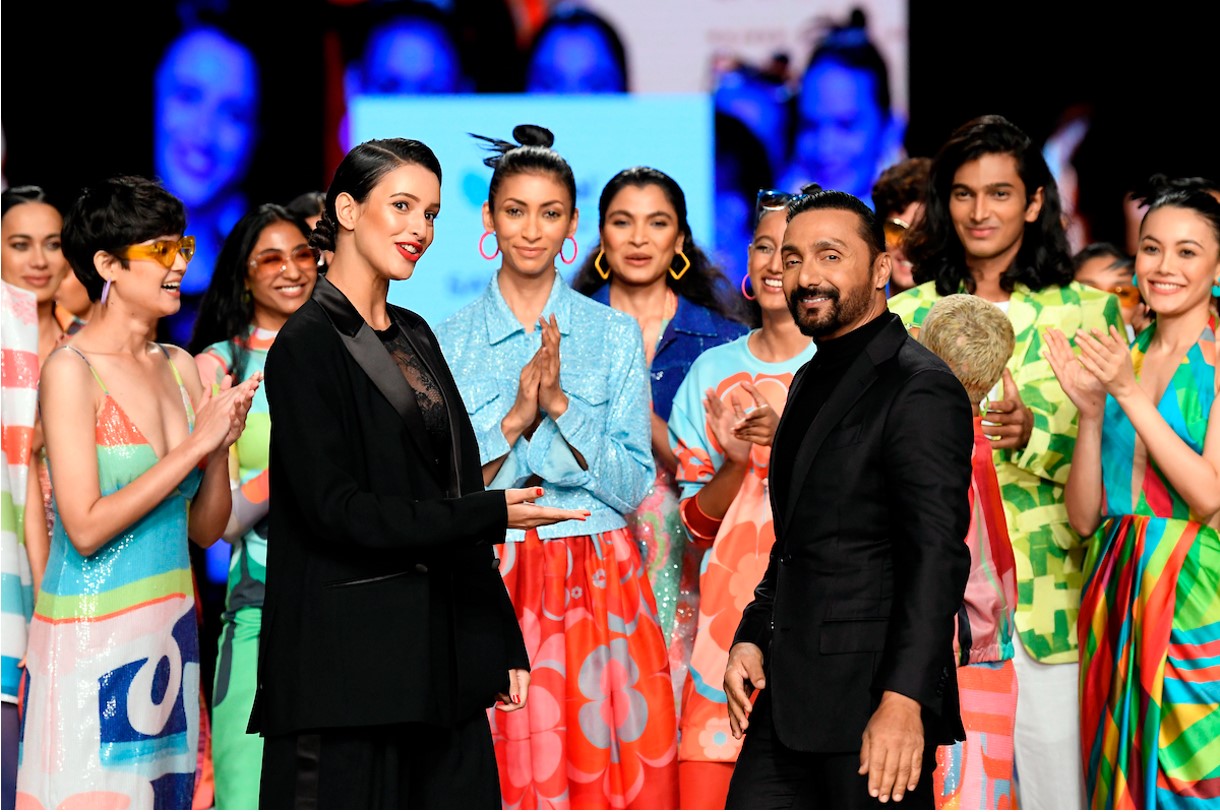 In addition to having a higher environmental value, the Carbon zero TENCEL fibres also featured the functional benefits of standard TENCEL fibres including gentleness on the skin, long-lasting softness, silky smoothness, enhanced breathability and colour retention. 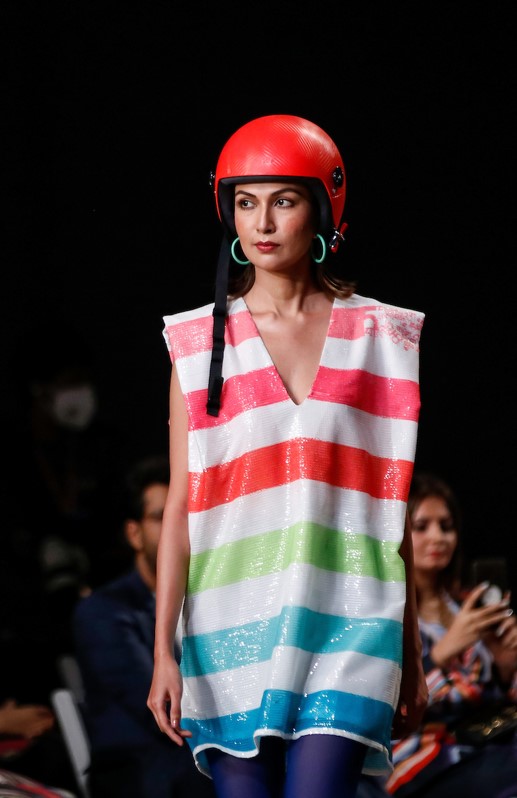 Having been with the Satya Paul brand, Rajesh Pratap Singh has always followed sustainability in his own practice, strived to make the brand more contemporary and also worked towards making it more sustainable not only in terms of production but also by using fibres that are sustainable. 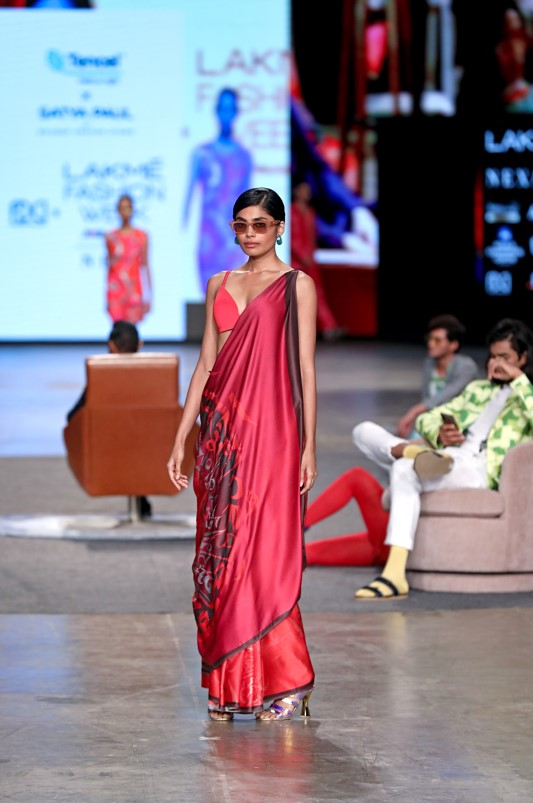 Rajesh Pratap Singh says, “This collection is a burst of optimism at a time of global volatility. ‘The Master's Words’ threads together the past and present in 2021, where we take this journey to the next level by prioritizing sustainable design, as we work with cleaner fabrics that are gentle on the earth. Several of the dresses, trousers, and shirts in this collection are made with Carbon Zero Tencel, a sustainable fiber produced by Lenzing. Entirely biodegradable, its only residue is water that regenerates the earth.” 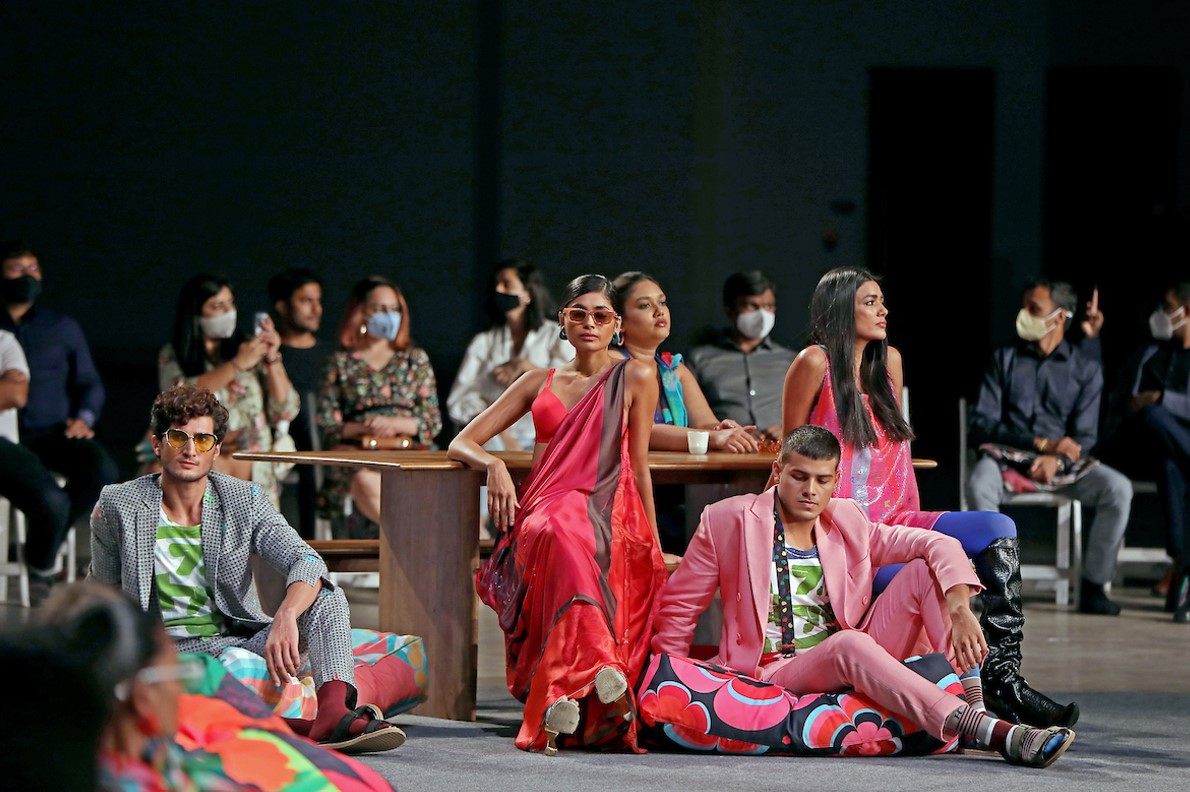 There was a riot of colours and abstract patterns for the men and women’s garments but with a marked 70’s and 80’s vibe. For women, Rajesh dreamt up summer sheaths, minis, jackets with bralettes and pants, dresses, draped skirts, tunics; shirt waisted dresses, hoodies and joggers. Kaftans, knee length coats, a trench version, pinafores, togas, halters, jumpsuits and biker’s jackets added more options. The brand’s core – the sari also added to the traditional flavour of the collection. Setting a firm trend were the leggings and tights in multi colours that appeared constantly for all women’s wear. 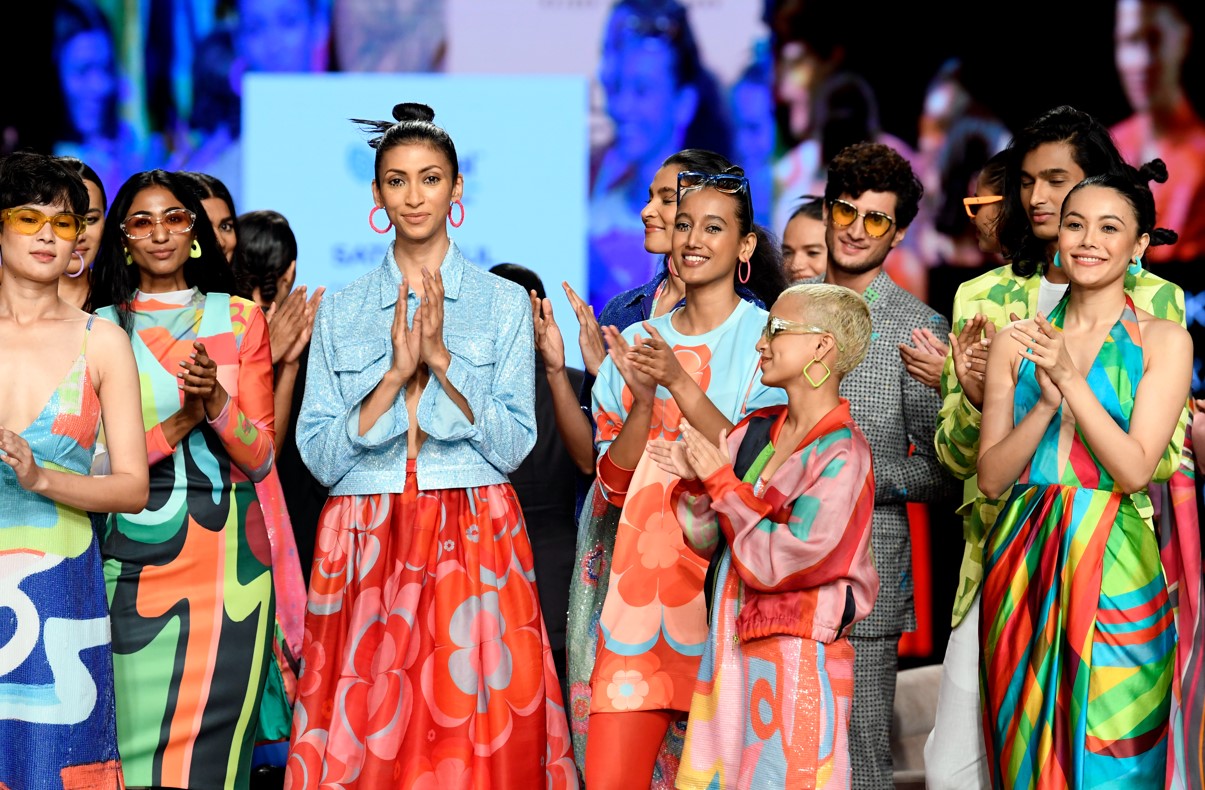 The showcase at FDCI X Lakme Fashion Week of the ‘The Master’s Words’ and ‘The Search’ was a mix of fashion and film. Though diverse in mediums, they were thread together by the energy of a journey, and the rewards of seeking and finding. The show began with the film Search -directed and creatively put together by Rahul Bose. The runway transformed into a theatre where the models got into a bubble of a retro living room  – while some were reading, some were dancing whilst some  transported into a trance-like world. 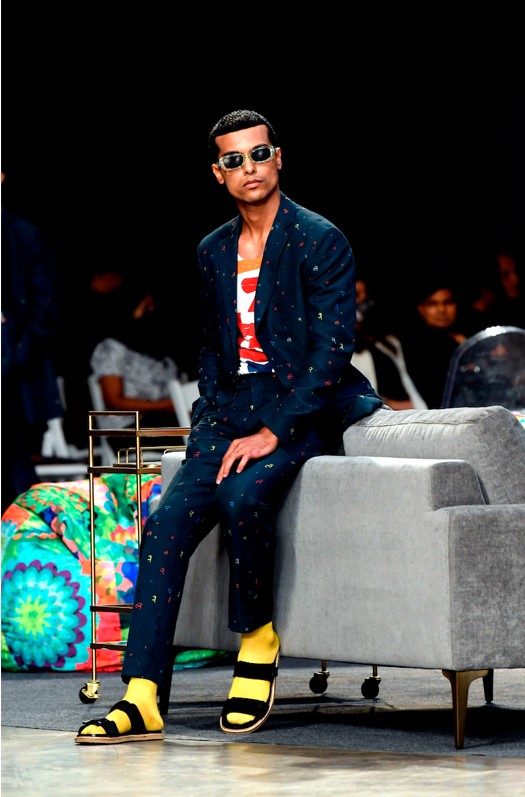 Rajesh Pratap Singh, Creative Director of the Satya Paul label kept the ethos of the Satya Paul style with athleisure, some dance tracks, along with trippy memories and contradicted it by the 70’s and 80’s looks of the collection. Rajesh was also inspired by Satya Paul’s love for calligraphy, which appeared on Mr Paul’s walls along with quotes from luminaries like Rumi and Osho, which were very relevant. There were simple words like love and they appeared in modern typography to encompass these zippy memories. Suspenders made a nostalgic appearance, many of which were from the late designer’s personal collection.  Bringing in some of the practical styles for dresses, trousers and shirts, which were made from carbon zero TENCEL™ a sustainable yarn that is entirely biodegradable and its only residue is water that regenerates the earth; the look was relaxed but contemporary. 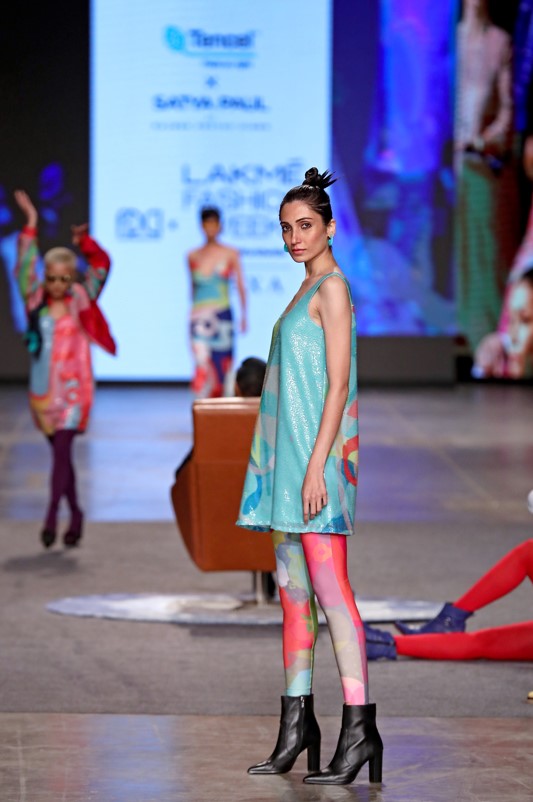