After Kangana Ranaut's sister Rangoli Ranaut called the makers and actors of Saand Ki Aankh for casting 30-year old heroines to play hexagenerians in their film, a huge debate had sparked off. 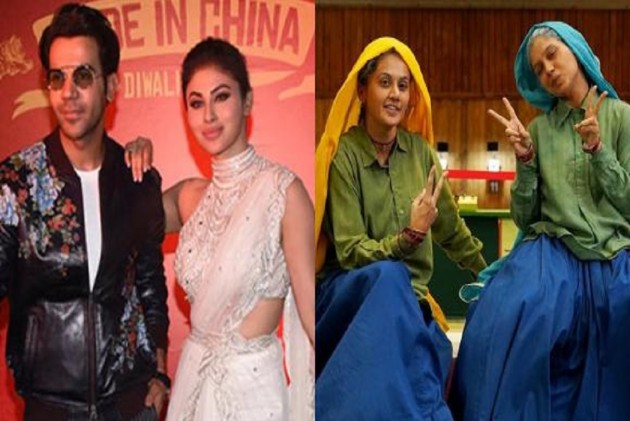 The moment Taapsee Pannu and Bhumi Pednekar starrer Saand Ki Aankh's trailer dropped, a huge controversy started surrounding the film. Kangana Ranaut's sister Rangoli Ranaut revealed that the film, then titled Womaniya, was first offered to her and also explained how the Manikarnika heroine suggested the makers to cast heroines like Neena Gupta and Ramya Krishnan to essay the roles since it's closer to their actual ages.

That conversation sparked a big debate on social media where the opinions stood divided. Taapsee and Bhumi have also spoken out on the issue and explained their stand. While their film clashes with Rajkummar Rao and Mouni Roy starrer Made in China today in theatres, the two actors also shared their view on the whole issue.

Mouni said, "The movie has not released. I'm not in a position to say things since I haven't yet seen it. Right now probably, it's unfair and we should keep the debate for when it's released. You need to see their roles and how they have performed first. Before that, judging someone isn't right. I wouldn't want anyone to judge Made In China too based on the trailer so, it's unfair for us to comment on that." Raj said, "If the actors can convince me with whatever age they are playing and I know you're talking about Saand Ki Aankh and if I'm convinced by these two ladies who are playing this role, it's okay. It just has to be convincing." It's heartening to see the industry stand by each other in such times.