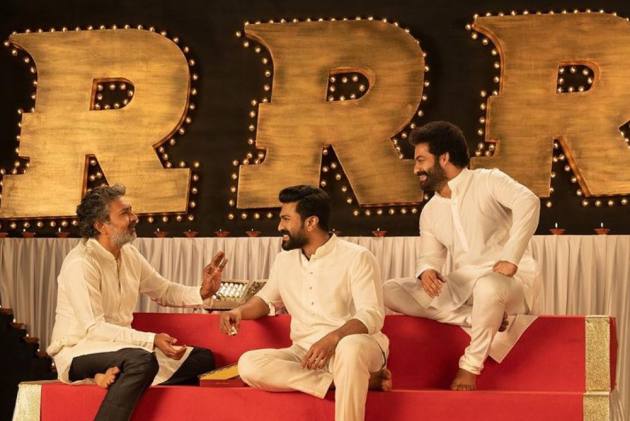 One of the reasons actor Ram Charan agreed to join the much-anticipated action movie 'RRR' was to see how director SS Rajamouli will accommodate two stars like him and Jr NTR in this concept.

The Telugu period film is Rajamouli's follow-up to the blockbuster success of his two-part franchise 'Baahubali.'

In an interview, Charan said 'RRR' arrives at a time when the two-hero film genre is slowly disappearing from the big screen.

"Rajamouli was the sole reason why I said yes to the film. I had heard the story and I was mightily impressed, but it was only much later that I realised the mammoth scale it would be mounted on... What also worked was two actors, who were supposedly arch rivals, coming together.... There was a lot of drama in that combination.

"Two big stars coming together was always possible, we have seen many Hindi and south films do that. But then it stopped, nobody did multi-starrers. I don't know the reasons, maybe the economics didn't work. But only a Rajamouli film could bring two stars like us together," the 36-year-old actor said.

Charan made his successful screen debut with the actioner 'Chirutha' in 2007, six years after Jr NTR arrived in the Telugu industry. Over the years, the actors emerged as two of the biggest stars of the industry.

While Charan worked with Rajamouli in his 2009 blockbuster 'Magadheera,' Jr NTR has been part of the filmmaker's titles right from his 2001 directorial debut 'Student No 1,' 'Simhadri' and 'Yamadonga.'

But Charan said he was never apprehensive to feature alongside another star for the film.

"There was no apprehension. But it felt like a pleasant shock, purely because I kept wondering, 'How is this going to be possible?' From scheduling to shooting, how will the equation between us work out to the economics of it? But we surrendered to his vision. His vision became bigger than any of our needs or wants. That is what drove both of us," the actor added.

Though Charan reunites with Rajamouli after more than 10 years, the time period saw both, the actor and the filmmaker, evolve into bigger personalities, delivering consecutive blockbusters.

"Honestly, Rajamouli has grown leaps and bounds. He is a different director today. He is extremely assured of his craft, knows what he wants, and has sensed the entire market beautifully."

"He is that one director who can comfortably break barriers and take Indian cinema international. He did that with 'Baahubali' too. When you work with someone so sorted, your job becomes easy," he said.

'RRR,' which was in the making for nearly three years, tested Charan physically, mentally, and emotionally.

It just wasn't that his role demanded absolute physical dedication, but also a sense of "responsibility" because he was playing a fictionalised character of freedom fighter Alluri Sitarama Raju.

"He is a legend, whom we have fictionalised. I didn't want to mess with it. He was a learned man, a yogi and had a remarkable vision in that era. To get into that headspace was a challenge.

"I had learnt about him in history books. He is an unsung hero so I had to approach it with a lot of respect and fear that I should not do anything which will upset the audience."

Throughout its shooting schedule of more than 200 days -- which was halted briefly due to the pandemic last year -- the actor said he underwent a huge transformation.

"I have evolved more during the shoot of 'RRR' compared to 13 years in the industry," he quipped.

"The project really taught me a lot. I am more patient today. I have a high tolerance level, physically I know I can push myself beyond the possibility. Whatever is humanly possible, you have to do that in a Rajamouli film. Mentally, physically, emotionally," Charan added.

While working with Rajamouli, the actor said, one needs to be at the top of their game every single day.

"You need to be constantly alert and have to give your all in terms of physicality, because he never uses a body double. Even if it is a shot being filmed from a really long distance, he will still insist you stand in because in social media times, the audience will pause, zoom and catch the bluff. And if that happens, they won't connect with the film. So it takes a lot of energy," he added.

Also starring Alia Bhatt and Ajay Devgn, 'RRR' is set to arrive in cinema halls on January 7. The film will be released in Hindi, Tamil, Malayalam and Kannada as well.