After making her film debut in 'Sun Meri Laila' (1983), Deepika Chikhalia went on to do many movies in several languages but she is still remembered for Ramanand Sagar's teleserial Ramayan, which is being re-run on Doordarshan 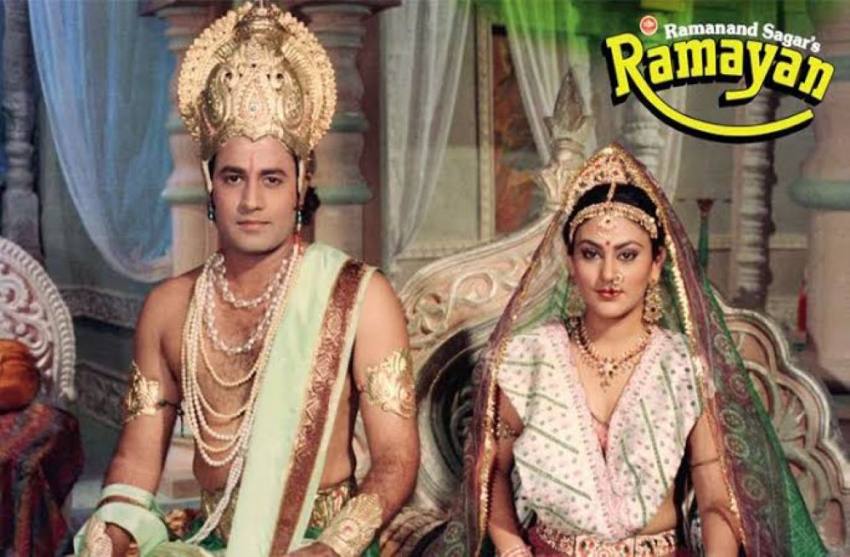 Deepika Chikhalia carved a unique niche for herself in the Indian entertainment industry by playing Goddess Sita in Ramanand Sagar’s iconic television serial, Ramayan. After making her film debut earlier opposite Raj Kiran in Rajshri productions’ Sun Meri Laila (1983), she went on to do many movies in several languages but she is still remembered for Ramayan, which is being re-run on Doordarshan during the ongoing lockdown due to the coronavirus outbreak. The 54-year-old actress speaks exclusively to Giridhar Jha of Outlook soon after the first episode of the 1987 serial was telecast on March 28, amidst a raging political controversy. Excerpts:

What thoughts came to your mind when you watched the first episode of Ramayan, when it was telecast during its re-run on Doordarshan today, 33 years after it was first screened?

I remember the first episode of Ramayan being shot on the first day of the shooting of the serial itself. That was also the first time I saw myself on screen as Goddess Lakshmi. It took us seven days to complete one episode because there was so much croma involved. The Sagars (the makers) were also using croma on such a large scale for the first time. Also, it involved depiction of the gods and the goddesses so we could not have taken it lightly. I recall that all through the seven days I kept pressing the feet of (the character of) Vishnu Bhagwan. I was remembering all those things and more. And yes, it was also nice to see myself looking so young onscreen again.

Ramanand Sagar’s Ramayan Then and Now: Politics Of An Epic Kind

What do you think are the reasons for its timeless appeal on television and beyond?
It has had a huge appeal. Ramayan is a story that people understand easily. It is a simple story of relationship, it talks about our culture. People definitely consider Ram as God and Sita as Goddess and it is part of Hindu religion and culture. It is the first book to have come out in the Hindu scriptures after Rig Veda and other Vedas, which turned into a story.

What impact do you think the re-run of Ramayan serial will have especially on the millennial generations of the audiences, who are used to seeing the best of the world shows with great VFX effects on over-the-top (OTT) platforms and elsewhere?
Today’s generation is, of course, watching Netflix and Amazon Prime Video where crisply-edited shows are streaming. Where will Ramayan stand a chance against them? Yes, I think it stands a chance because it is more than a television series. It needs to be treated as a wholesome treat for your soul. It will make you understand what your culture is all about. People should not look at Ramayan as being merely a source of entertainment, thinking things like that it is slow paced, etc. It may not have the advantages of the latest digital technology in terms of production values, but it has something for us to learn. I have been saying it for a long time. Please learn and imbibe something from it. Times do change. There was a time when people used to write on leaves before paper came and now, we are in a digital media. I can easily say that Ramanand Sagar’s Ramayan is of the level of Valmiki’s Ramayan or Ramcharitmanas of Tulsidas and that is what it was meant to be. Don’t treat it as a satellite channel show. It is the food for the soul. I was telling my daughter that you go out and eat the best of cuisines, you can eat the Chinese or Italian food for days but when you come back home, you need dal-chawal or khichdi. That is who you are as a person. You need the break. Ramayan is that kind of food for soul. Don’t treat it like entertainment. Ramayan has the 30-year-old production values and you cannot do anything about it. But people need to accept the fact that it should not be seen only from the entertainment point of view. The millennial kids should also understand that. For them, there is so much to learn from it. They cannot read Tulsidas so this is their second option to understand the Indian culture.

The re-run of Ramayan during the current lockdown has also kicked up a row, with many people accusing the government of having a political agenda behind it?
It is over and done with, as the telecast has already begun. There are people in the Opposition who would oppose it. As far as Lord Ram is concerned, they have turned him into a political agenda or a political figure. I really think that it is not correct. Ram is a king who lived with certain principles. It is a story about a king, a husband, a son, a brother. Treat his life as a learning lesson and do not see everything from the political point of view.

People used to touch your feet back then because you played a much revered goddess onscreen. How do you look back at such an experience?
This is a country which has faith and lives on understanding that there is God. That is why they treated us as demi-gods. I have certain respect about it. I cannot do anything about it. I just respect people. It is like saying Bhagwan bhakt ke bagair kucch nahin hote hain. Jo bhakt karta hai use karne do. (God is nothing without his worshippers so let them do whatever they want.)

Your film career began with Rajshri Productions’ Sun Meri Laila but your career in Bollywood did not really take off? In contrast, you did many regional movies opposite the likes of Mammootty, Naresh Kanodia and many other big regional stars…
I was very versatile and I was also welcomed with open hearts and open arms in all the different regions where I worked. I am afraid that Hindi cinema did not give me the kind of work I was looking for. So I went and did films in all the major languages down South as well as in Bengali, Gujarati and Bhopuri where they all turned out to be superhits and are remembered to this day. I was very lucky that I moved on from Hindi cinema and did good work there because there was a calling within me as an actor to do good work.

Still, you quit cinema quite early in your career? Was your foray into politics responsible?
In 1991, I entered politics and contested elections to become an MP. I also got married. That was too much to handle in my life. I had to travel up and down to my constituency. I was newly-married and was not happy doing that. For me, it was getting difficult by the day so I let go of the film world. Later, I left politics after my daughter was born because she needed me at home.

You have lately staged a comeback to Hindi cinema. Are you open to working in more movies now?
Of course, I am open to good work, good roles, good scripts and good banners. I am really looking forward to my second stint in Hindi cinema. Not much happened for me during the last time. But now, a lot of good movies are being made. I recently did Ayushmann Khurranna’s Bala (2019). At least, I am having a comeback and there is awareness in the industry that Deepika is back.

Does it mean return to the electoral field to contest another election also?
I have not thought anything about it as yet. Anything I say at the moment would be a hypothetical answer.