Ranbir Kapoor Was In Denial About Rishi Kapoor's Treatment For An Hour, Reveals Neetu Kapoor

Neetu Kapoor reveals what went down when she first told about husband Rishi Kapoor's cancer to Ranbir Kapoor and how they eventually decided to do what was needed. 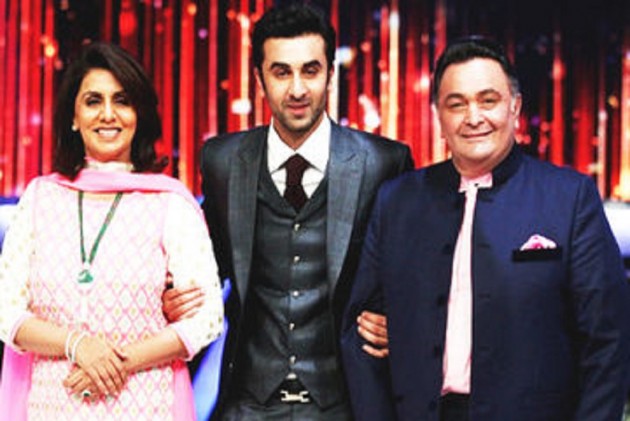 Neetu Kapoor and Rishi Kapoor have been away in New York for close to a year now due to Rishi's cancer treatment. Rishi had taken to social media to announce about his departure, but it was later that it was revealed that it is cancer. Ever since, all this time, everyone who visits New York and knows them has made it a point to visit the two, in fact Ranbir Kapoor and girlfriend Alia Bhatt also headed off to New York on multiple occasions.

Now, in her interview along with Rishi, Neetu revealed how she broke the news to Ranbir and how he was left teary-eyed. She said he was traveling while Ridhima was already there in Mumbai and then when he came, she sat him down to tell him there is something she wants to tell him. She also went on to reveal how he had tears in his eyes and was wondering how can that be, and he was in denial for an hour or so and then after composing himself, he said okay, let's deal with it after which, Ranbir flew to Delhi the very next day and picked him (Rishi) and then they were on the flight to New York.

Meanwhile, Gauri Khan recently visited the two in New York, and the picture has been all over social media ever since. In fact, SRK has visited them earlier and many other whos who of Bollywood made sure to drop by whenever they were in New York. In the same interview, Kapoor also revealed that he looking at an early September return, and we are hoping for the same as well.