Mondol, who once worked at the late actor-director Feroz Khan’s Juhu house in Mumbai along with her husband as domestic help, is now a much sought-after name in the music industry with several filmmakers and music directors showing a keen interest in working with her for their next projects. 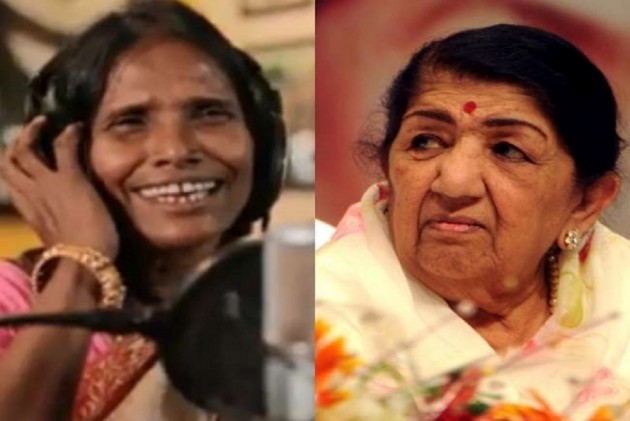 Lata Mangeshkar’s remarks on the latest internet sensation Ranu Mondol that imitation does not guarantee a lasting success to an aspiring singer may not have gone down well with many netizens but the venerated “Nightingale of India”, who will be turning 90 later this month, has only spoken the truth. In the Hindi film music industry, many clones of great singers have come and gone after savouring ephemeral success.

Mondol, a poor 58-year-old woman, who shot into fame after a video of her shot by a passer-by at Ranaghat railway station in West Bengal while she was singing Ek pyar ka nagma hai, a Lata-classic from Manoj Kumar’s Shor (1972) went viral. It prompted composer-actor Himesh Reshammiya to give her a break in his upcoming movie, Happy Hardy and Heer. The promos of her songs have since impressed many people because of her mellifluous voice and superb rendition.

Mondol, who once worked at the late actor-director Feroz Khan’s Juhu house in Mumbai along with her husband as domestic help, is now a much sought-after name in the music industry with several filmmakers and music directors showing a keen interest in working with her for their next projects. Hers is certainly a modern-day fairytale of a real talent forging its way to get its due in the face of the seemingly insurmountable impediments.

Mondol, doubtless, has been heavily inspired by Lata’s songs since her childhood, like millions of others from across the world who have grown up hearing her voice. And it was her rendition of one of Lata’s hit numbers, penned by Santosh Anand to the tune of Laxmikant-Pyarelal, which catapulted her to the dizzying heights of popularity on the social media. But, as Lata has pointed out, Mondol should note that imitation “is not a reliable or durable companion for success”. “By singing my songs or Kishoreda’s, or Rafi Saab’s, or Mukesh Bhaiyya or Asha’s numbers, aspiring singers can get short-term attention,” Lata was quoted as saying in a recent interview.

Lata’s opinion may have elicited an angry response from Mondol’s admirers but a cursory look at the history of playback singing in Bollywood proves that she is not wide off the mark. It is true that that aping an established singer has never helped any newcomer in building his or her career, however good he or she may have been. A good number of extremely talented female singers, from the wonderful Suman Kalyanpur and Vani Jayaram to Hemlata, Sulakshana Pandit and Arti Mukherjee could not prosper despite having distinct voices because they were unnecessarily compared to Lata and her younger sister Asha Bhosle in their heyday. It is often alleged that many singers like them did not have a flourishing career because of what was called the “Mangeshkar monopoly”. But it was also a fact that a majority of new songstresses, intentionally or unintentionally, tried to imitate the Mangeshkar sisters. They soon disappeared from the scene simply because no producer or composer was interested in hiring a clone when the originals were still available to them. It was only towards the end-1980s when the Mangeshkar sisters, especially Lata, cut down on their assignments because of their advancing age that younger singers such as Anuradha Paulwal, Kavita Krishnamurthy, Alka Yagnik, and Sadhana Sargam came to the fore. Shreya Ghoshal and Sunidhi Chauhan and a few others followed suit but they all had to prove that they were originals and not anybody’s clones.

Among male singers also, there was a mad rush among the young singers to fill the vacuum caused by the death of the greats like Mukesh, Mohd Rafi and Kishore Kumar. Some had, in fact, emerged in their lifetime also. Manhar, for example, sang some terrific numbers like Aap se humko bichhade hue (Vishwas/1969), Lute koi man ka nagar (Abhiman/1973), Har janam mein hamar milan (Kagaz ki Nao/1975) before hitting the purple patch with Qurbani (1980) and Hero (1982) but he was often considered to be “a poor man’s Mukesh” because of the similarity in their voices. Kamlesh Awasthi also sounded like Mukesh in Zindgi Imtihan leti hai from Manmohan Desai’s Naseeb (1981) but he disappeared soon thereafter. Singers like Anwar, Shabbir Kumar and Munna Aziz tried to step into the big shoes of Rafi in 1980s with many a hit numbers but they all slunk into near-oblivion after a few years of fame in the 1980s. Similarly, Kishore Kumar-inspired crooners like Abhijeet and Kumar Sanu belted out super hit numbers in their heyday but they also subsequently ran out of the steam. Even Nitin Mukesh (Mukesh) and Amit Kumar (Kishore Kumar) had to pay the price for being the sons of the legendary singers. In comparison, Udit Narayan, Sonu Nigam and, more recently, Arijit Singh survived the test of the time because they had evolved a style of their own, without sounding like the great singers of yore they might have idolised in their formative years.

It, therefore, makes it imperative for Ranu Mondol to evolve a style of her own if she wants to be taken seriously as a singer of substance in future. She has, doubtless, a god-gifted voice but she cannot afford to imitate Lata. After the charm of her new-found stardom wears off and the people forget her background, she will be judged solely on the merit of her songs.