Rajeev Mehra, who trained Ranveer Singh for '83 has also trained Shahid Kapoor for his role in the upcoming film 'Jersey'. 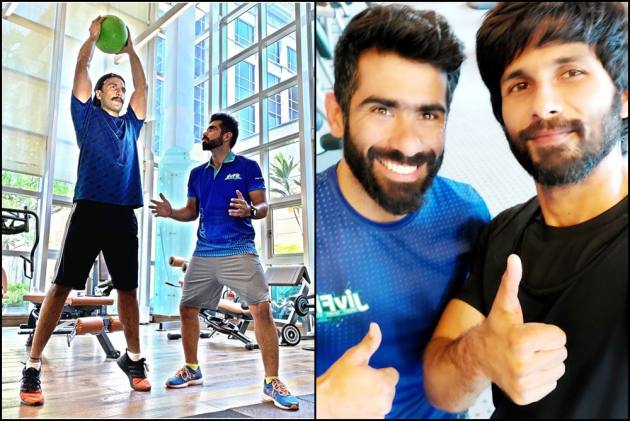 Bollywood actor Ranveer Singh shared a moving note on Instagram, written by Rajeev Mehra, who trained him for his role as Kapil Dev in Kabir Khan's film '83', in which Mehra had lauded Singh's dedication towards getting the role spot on.

Mehra, 33, is a certified personal trainer (CPT) from American College for Sports Medicine (ACSM) and represented Mumbai in the U-22 Inter-state cricket and also played A’ division Times Shield and Club Cricket in Mumbai. He is also one of the youngest to have got the opportunity to coach the Mumbai U-16 probables.

He has also trained actor Shahid Kapoor, for the upcoming film 'Jersey', which will also see Kapoor, just like Singh, as a cricketer.

One might think that training Shahid Kapoor and Ranveer Singh for ‘Jersey’ and ‘83’ respectively, might be similar since they are based on cricket, yet their trainer, Rajiv Mehra explained the training patterns for both the actors were remarkable different from each other’s training regimes.

“I understand that people would think since both are based on cricket, the regimes would be same but they were very different from each other. Not only because of the fact that they are two different individuals, and have very different histories of fitness regimes for different characters they have played in their careers, but also for the roles they were playing in the film,” he said.

“Ranveer Singh is playing an all-rounder, and more importantly a fast bowler. The entire physical movement of a fast bowler is very different and we had to achieve that. Shahid was a pure batsman, so we had to work more on the skill work and more on his batting,” said Mehra.

Working with celebs and helping them achieve their fitness goals comes with its own challenges, as he points out.

“Training celebs is different ball game. Everyone is experienced and they are health conscious. They have been through different modules of fitness. And at the same time there are certain principles they always follow. So as a fitness trainer, I need to understand what has worked for them in past. I can’t force myself on them. I try to modify and slowly after I gain the trust, I try to educate them on how they can reach their fitness goals and other things like how to be injury free, etc.,” he said.

Before he gets down to start working with a celebrity, Mehra believes in doing his homework, in terms of getting information regarding the celebrities previous training schedules and their past injuries.

“Ranveer had a residual knee injury when we were training for’83’. So we had to come up with prehab and rehab plans for him to get to the best physical shape for the role and be able to carry his body through other future regimes easily. So not just raining, but we used to monitor the entire situation, so that the bowling doesn’t worsen his injury,” he explained.

“Even for Shahid, it was important to make sure that no injuries take place. Its not easy hitting 500 balls every day. It takes a lot out of you and affects your wrists, forearms and even legs for that matter, because you are standing for such a long time. So, there was a systemic approach to everything. We made sure there was enough time for strength training, improving the skill work and enough time for rest for the body to recover and do the same thing the next day,” he said.

He feels that it is important for people to understand that celebrities, especially performing artistes have very different physical regimes, and adds that while fans should learn the “discipline, dedication and the passion” from celebrities, in terms of following a fitness regime, they should steer clear from following a celebrities’ fitness or diet patterns.

“Actors train for a specific role. That’s their profession. A common man trains because its about maintain a certain lifestyle for them. Its not for them to look like a certain way, but to be able to stay physically and mentally fit, to be able to carry out physical activities out of their daily schedule,” he signs off.