'Rashmi Rocket' Movie Review: Not In The Right Orbit!

In the midst of all the seriousness that the film is intended for, an out-of-the-blue song and dance featuring the lead actors, makes you wonder which way the film is headed. 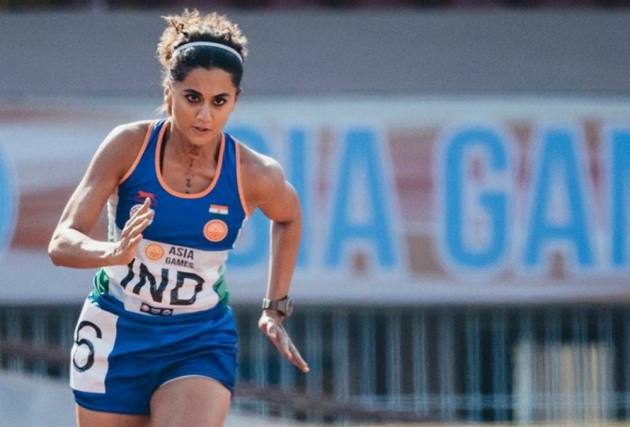 One of India’s professional sprinters and national champions in the women’s 100 metres event, Dutee Chand, who is also the first Indian to win a gold medal in 100m race in a global competition, was dropped from the Indian contingent for the 2014 Asian Games in compliance with International Olympic Committee (IOC) regulations on "female hyperandrogenism" designed to address a perceived advantage for female athletes with high androgen levels. The decision, though widely condemned by nearly all the countries, raged a debate worldwide on the issue of some female athletes having “high testosterone levels.”

The Akarsh Khurana-directed film 'Rashmi Rocket' is not entirely based on Chand’s life, but has selectively used a few elements of all the polemics that plagued her and earned her the dubious distinction of being a “female champion.”

Khurana, along with screenplay writers Kanika Dhillon and Aniruddha Guha, had all the right intentions of narrating the Nanda Periyasamy written story of a small-town girl who overcomes all societal barriers to become a national-level athlete with the most sincere approach. But in his earnest enthusiasm to raise an issue that has, perhaps, not been dealt with earlier in any Hindi film, allows stereotypes to hinder the glory of a girl wronged by patriarchy and unjust social system, just the way the protagonist’s career is stalled and mired in ugly controversy when she is asked to undergo a gender test.

The small-town girl Rashmi Vira (Taapsee Pannu) is born with the rare talent to run with utmost agility that makes her sprint faster than anyone in the neighbourhood. Her father (Manoj Joshi) and mother (Supriya Pathak) dote on her and help her in earning the moniker ‘Rocket’ for being the fastest runner. As word gets around of her immense talent, she also wins admiration from far and wide, and even finds herself training to compete at the national level. Soon, as her reputation precedes her, she also begins to make rivals feeling threatened, leading to a conspiracy that could draw the curtains on her career.

Though she does achieve success and glory and wins three medals at an international event, her career path is riddled with scrutiny regarding her being a “female” and there are question marks that spell disaster. Had it not been for the Army captain Gagan Thakur husband (Priyanshu Painyuli), who is himself a former athlete, she probably would not have mustered enough courage to get back on the running track all over again.

The hyperandrogenism regulations force her to remain out of many events. She seems to compromise in her new role as a wife, but it is lawyer Eeshit (Abhishek Bannerjee) who refuses to take No for answer and insist on dragging the Indian Athletics Association to court.

Although there is no official statement made by the producers, it is apparent that Rashmi’s story has been inspired by Dutee Chand’s. Chand loves her body just the way it is, and believes that the body she was born with, including every chromosome and cell and organ, makes her the person she is. Rashmi too, is her own person, and like Chand, is capable of fighting her own battles. The only time she yields or submits is whenever she has to face the higher-ups or the court of law. After all, the world doesn’t care and stereotypical notions about both male and female abound. It doesn’t help or rather it is even worse, when the ones in control, anyway, are all determined to ruin her career. A rival whose father (Varun Badola) is part of the selection committee favours his own champion daughter, who has to be content with being in the ‘also-ran’ category.

The issue of ‘gender testing’ is not something that can be merely woven into a storyline to score brownie points. There have been a number of young extremely gifted and equally hard working young girls whose careers have been shortlived because of the blundering riles that act as stumbling blocks in the way. And we all know an athlete’s life has a short shelf life, and if damaged once, there’s no way they could bounce back. Rashmi gets lucky in a way, but that’s also because as a template that all sports movies follow, her struggles had to be highlighted in a story that crams too many clichés and ignores many specific queries that emerge from a generalised view of women and their options in life, be it their career choices or their day to day essentials and particulars that call for attention. Every bit of the flow of the narrative seems to somehow reach the concluding part of Rashmi’s final victory as fast as possible. Even the film’s runtime of 129 minutes is fast tracked as much as the trials in the courtroom are hurriedly done away with. In the midst of all the seriousness that the film is intended for, an out-of-the-blue song and dance featuring the lead actors, makes you wonder which way the film is headed. Pannu who is quite used to doing such characters with a deep seated conscience looks the part of a sportsperson admirably. Priyanshu is ably cast as an officer while Pathak by now must not be requiring lines to deliver as a mother- so often she has been playing such a role!

I wish there was more of Badola though, both as an actor and his interesting character that would have added some heft!