A short story by Delhi-based author Mrinalini Gupta reflects the emotions of people in light of the Covid-19 pandemic through the eyes of a fictional prince who returns to find his home devastated by a virus. 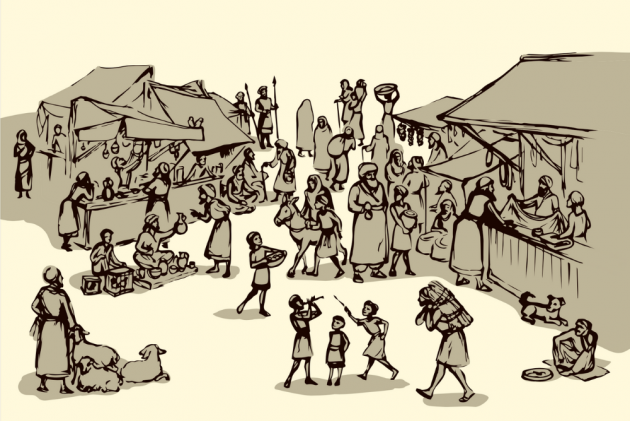 This strange thriller of a short story is about a light-hearted prince finding his kingdom and his home devastated by a deadly virus. This disease, the author says, “followed no rules, it succumbed to no medicine. In a matter of fifty days, it had raised its ugly head and swallowed a third of his kingdom.” By the end of the story the protagonist, the prince, stands face to face with death. Its author, Mrinalini Gupta, says that the story is “about an emotion in the light of current times and the feeling of being inadequate at doing something about it”.

He walked down the dusty market lane; his face wrapped in a thick fabric covering everything except his eyes. What was once a cheerful busy marketplace with loud hawkers selling meat, spices, dry fruits, silks and leather, lay desolate. A few people hurried past, heads wrapped in fabric, noses covered, eyes lowered. There was an air of fear and suspicion.

A few homeless remained, in corners, holding out for alms, flimsy threadbare cloth covering their faces, their eyes speaking volumes.

He pulled out some bread from the folds of his robe and dropped it into their bowls, taking care to stay away. A strange disease this was. Unheard of. It followed no rules, it succumbed to no medicine. In a matter of fifty days, it had raised its ugly head and swallowed a third of his kingdom.

His Kingdom? He had always believed it was. All twenty-eight years of his life. He had grown up with a love for this small strange kingdom, its vibrantly cheerful marketplaces, its small dusty lanes, the sandy houses, adorned with a riot of colours, the spirited women, old and young, and Eid, where the little place morphed into a nine-day carnival, of silks and gold and sweets and meats.

He had been the young prince. Favoured and loved by all. From old Fatima, who wove whimsical silks and lovingly saved the most unusual one for him, to Abdul, who had always applauded the mischievous prince and always had a sweet or a savoury saved for him.

He was twelve when he had first sneaked out of the luxury of the palace to visit the little kingdom. He had discovered a vibrant little world outside, which had never failed to delight him. He seemed to belong more to the world outside with its air of business, the raucous shouting, the lofty women and the incorrigible men, than to the well-behaved inhabitants of the palace.

His flimsy disguise was soon discovered and with delight, the village-town had conspired to keep his secret. Few in the palace ever discovered the secret life of their wild prince, least of all, the king.

There had been cries in the streets. Protests. People had fallen like flies, the disease had poisoned the air. Breathing had become lethal. In five days, the protests stopped. There weren’t enough people to protest. The palace remained silent; its finely carved gates closed.

Inside the palace a strange kind of silence descended. There were no court sessions anymore. A few palace attendants remained; others left. No one said anything. The air was heavy with unspoken words. Stories of deaths filtered into the palace from outside. The king heard them all and said nothing. The queen waited and said nothing. The informant bowed and left. Royal meal times were strained. Finely cooked meats tasted like saw dust. More music was played and more silks were worn. The queen chattered more than usual. The king poured more wine in his cup. The prince stopped attending the meals.

His father had showered more gifts on him in the last few days. His own jewels, his most valued robe with a strained sort of gaiety. The prince had said nothing.

Today he had sneaked out again, unable to stay away. He had hidden his face and covered himself well. If he died ... well so be it.

As if by instinct, his feet led him in the direction of Hamid. Hamid was his friend. Fourteen years, they had created much trouble in Hamid’s neighbourhood. Tall, well built, with expressive kohl-lined eyes and a silent disposition, Hamid and the prince were well suited, Hamid the quiet alibi to the antics of the prince.

He reached a green wooden door and knocked. There was no reply. He knocked again. Nothing. He pushed open the door. The room was dark and full of flies. There was a strange odour. The prince reeled back as flies flew out of the door and entered the darkroom. In the little light, he could make out a figure on the bed. Holding his cloth mask against his face he moved closer. It was Hamid’s mother.

It was night. The crescent moon shone from his window with little regard for the world below. The prince hadn’t moved. The palace was in darkness. At some point, he had worn his father’s robe. Yet he felt unable to move, staring into a point in the sky as if hypnotised.

A loud crash broke his hypnotic state. He ran out of his room, into the corridor. He saw his father retreating, walking, unstable from too much wine, having knocked over a vase in his state. The vase lay broken, bits of glass shining in the light. He watched, unmoved as his father struggled to push against the heavy doors to his quarters. He watched his father finally succeed and stumble into his rooms as the carved doors swung back behind him.

He stayed there, slowly sliding back to hypnosis when he heard it. The roar. His fathers roar. Jolted, he ran down the gilded corridor and reached the heavy door. He pushed and entered the dimly lit royal room and stopped dead.

His father lay, awkwardly on the diwan, a knife through his chest, a figure in shadows half way out of the window. As the prince ran in, the figure stopped and turned. A ray of light fell on his banded face and his kohl lined eyes. Hamid and the prince looked at each other for a moment. Then with a swift movement, Hamid disappeared out of the window and into the night. The prince, he said nothing.

(The author, Mrinalini Gupta lives and writes in New Delhi and describes herself as a 'seeker of alternate realities').