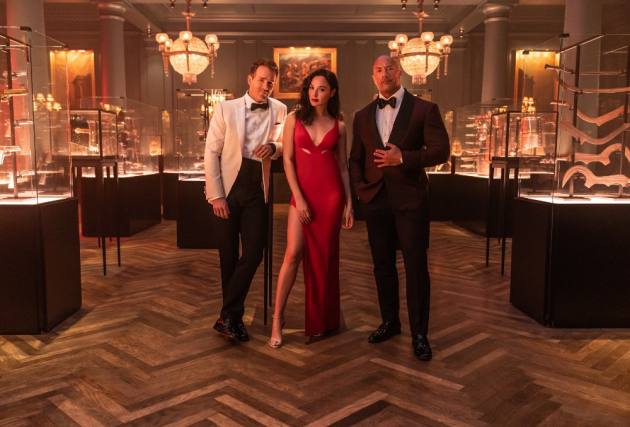 It’s not that masala movies are not made in Hollywood, but its just that they are so seldom, that if you see one, you don’t really know how to react. So, it’s a pretty confusing situation one is in, when they are watching the deadly cocktail of action, drama and comedy, they are caught between whether to or not to, revel in some mindless-yet-larger-than-life characters, played by some of the biggest Hollywood stars, indulge in some pretty amazingly choreographed fight sequences, power-packed action scenes, intense drama and of course, passionate love scenes as well.

Netflix’s upcoming film ‘Red Notice’ is one such film, which will definitely be a better viewing experience, if one were to leave their brains around for this one. There’s absolutely no point in using it, because there’s hardly any depth, or themes in the story. In fact, there are moments when one would probably wonder if Rawson Marshall Thurber gave lot of thought in writing a story, or if he was more focussed on making the three lead actors --Dwayne ‘The Rock’ Johnson, Gal Gadot and Ryan Reynolds--play the almost superhuman versions of themselves.

The story, as mentioned before, is pretty simple. When an Interpol-issued Red Notice — the highest-level warrant to hunt and capture the world’s most wanted— goes out, the FBI’s top profiler John Hartley (Dwayne Johnson), on a mission to capture the world’s most ‘wanted’ art-thief, runs into the world’s greatest art thief, Nolan Booth (Ryan Reynolds). But, when Hartley is himself arrested by the Interpol for allegedly assisting Booth in the theft, he is forced to team up with Booth to hunt down ‘The Bishop’ (Gal Gadot), who is both – the most wanted and the greatest-- art thief in the world.

From there on, the viewers join these three larger-than-life characters on a series of high-flying adventure, across four continents. The banter between Booth and Hartley, though fresh and extremely funny (largely thanks to Reynolds’ impeccable comic timing) is a trope that has been used in countless buddy films, where the two male characters have completely different personalities, yet come together to achieve their mission.

And if cliches weren’t enough, there’s a powerful woman character, who keeps the two male characters constantly on their toes, proving that she is better than them all along. Gal Gadot, of course aces that role of ‘Bishop’, with minimal fuss. The fight sequence in the middle of the movie, where Bishop, single-handedly and quite successfully manages to put the both Booth and Hartley in handcuffs after an intense fighting sequence in a two-vs-one situation, highlights how director Rawson Marshall Thurber, was more focussed on getting the result from star power and old worn-out cliches rather than focussing on creating a story line.

Throughout its runtime, while you are marveling at these Hollywood stars, and their chemistry, one cannot help but wonder, how great it could have been if there was just a little more attention given to creating a plot, that probably would have put their amazing abilities into context. The discussion between Booth and Hartley, where Booth narrates a traumatic childhood story, is one of those rare moments, which humanise the respective characters, and one gets slightly more invovled with their lives.

There is enough star-power, action, comedy and drama that keeps one occupied, and since it is a film on an OTT platform, it might just end up becoming up one of those films which has a great start, but fizzles out from the memories with time.