Khorshed, who took on the name Saraswati Devi to escape the attention of her community which was against her working in Bollywood, shattered many barriers and became a pioneer music composer 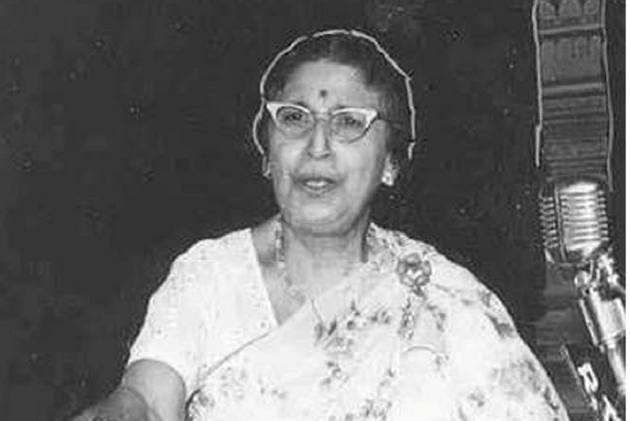 Much before the current crop of female music composers in Bollywood - Sneha Khanwalkar (Gangs of Wasseypur), Rachita Arora (Sacred Games), Alokananda Dasgupta (Sacred Games, AK vs AK) and so on, there was a Parsi woman named Khorshed who as a music director was the rage of the day? Remember ‘Main ban ki chidiya’? That's her. Khorshed, who took on the name Saraswati Devi, in order to work freely in a conservative society, delivered musical hit after hit, but not many people remember her today. In the second installment of Sands of Time, by Amborish Roychoudhury, writer and national film award winner, we look at this pioneer in the Hindi film industry and the impact her career left behind.

Raichand Boral a.k.a R.C. Boral is widely recognised as the “father of Hindi film music”, chiefly because he was known to have invented playback singing. His Dhoop Chhaon (1935) was the first film to feature a song which was actually performed off-camera, with actors lip-syncing on screen. Boral was also behind many iconic songs over the years, including Ek Bangla baney nyara (Badi Behen, 1937) and Tere gathri mein laaga chor (Dhoop Chhaon, 1935). 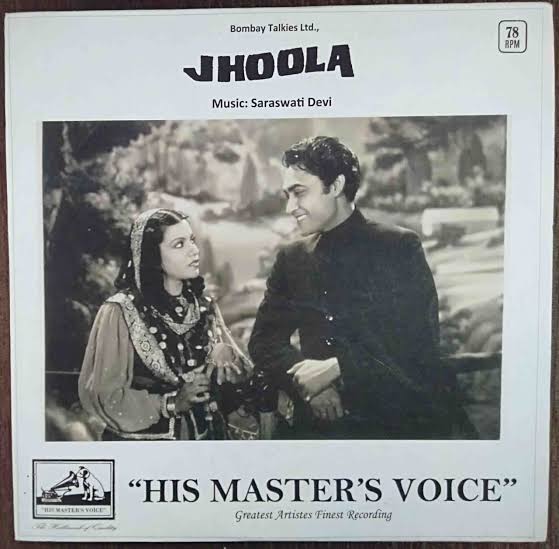 Sands of Time - Part I: The Forgotten Stars Of Silent Cinema In India

But a Parsi woman with no less contribution or stature in Hindi film music, has been all but forgotten. Song-for-song, she probably delivered more hits than Boral and experimented with playback technology around the same time. But as was prevalent in Bollywood then, as now - men walked away with all the glory. Women had to claw their way in, do breathtakingly spectacular work and yet it was the men who found their names in history books (not that anything has changed now).

For the first couple of decades, our films didn’t make a sound. The only music heard during screenings were orchestras and local performers playing live in the theatre, as the film unfolded on screen. In 1931, as soon as the first “talkie” Alam Ara came about, the Hindi film song made its debut. That film - the ‘hundred percent talking picture’, as it was advertised - had seven songs. Seven! The actors themselves sang to the camera.

With the same microphone that was used to record dialogues, songs were also recorded. Quickly, the actors who didn’t speak well or didn’t have a singing voice were driven out of circulation. The measure of excitement around songs in the early talkies was evinced from the fact that the very next year, Madan Theatre Company produced Indrasabha (1932), which had a total of 71 songs, a record still unbroken. India’s first true diva, Devika Rani and her husband Himanshu Rai laid the foundations of Bombay Talkies studio in the Bombay suburb of Malad, which was steeped in wilderness back then. Devika and Himanshu had spent some time in the west, observing such masters as Fritz Lang and the propagandist Georg Wilhelm Pabst. Devika had even done a course in filmmaking, and the two of them had made up their minds about granting Indian cinema its place on the global map.

Himanshu was looking for someone to help score the music in his films. It was Harindranath Chattopadhyay (Sarojini Naidu’s brother and an actor who famously appeared as the magician Barfi in Satyajit Ray’s Goopy Gyne Bagha Byne, and as the grandfather in Hrishikesh Mukherjee’s Bawarchi) who, legend has it, introduced Himanshu to the Homji sisters, a pair of singers who were getting really popular in Bombay’s All India Radio service. The two sisters - Khorshed and Manek were immensely gifted musicians. Both had beautiful singing voices, and were able to play a plethora of instruments. Khorshed played the organ, and Manek was adept at sitar, dilruba and mandolin. The girls were tutored in classical music under Pandit Vishnu Narayan Bhatkhande at Lucknow. By the late 20s, they were a regular at the Bombay radio station. When Himanshu bumped into them, he recognised it as a great opportunity to ramp up the musical possibilities of the talkies that they were producing under the banner of Bombay Talkies. But Homji sisters’ Parsi brethren would have none of it.

There are two other versions to the story. These developments unfolded in the infancy of Indian cinema, so very few reliable accounts exist. In one version, Himanshu heard the sisters singing on the radio and hired them. According to another version, Himanshu met Khorshed at a music conference at Lucknow. That’s where he heard her sing and invited her to come to Bombay.

The Parsi community was up in arms against two of their own - that too girls - being asked to work in the movies, a decidedly evil force. There were attempts to convince the elders, but they would have none of it. There was no way they’d allow their girls to work in the film industry, a place reserved only for “fallen women”. But Himanshu Rai as well as the Homji sisters were convinced that they needed to do this. Himanshu hatched a ploy to get them in without letting anyone in on it. He suggested they change their names. Khorshed became Saraswati Devi, while Maneka was rechristened as Chandraprabha. And that is how these sisters have been credited in film after film in the 30s, without much fuss from their community elders.

Saraswati Devi, at the behest of Himanshu Rai, accepted the responsibility of managing the music department of Bombay Talkies. Her first job was to compose the music of Jawani Ki Hawa (1935). Most of the songs were performed by Najmul Hassan and Devika Rani, the two leads. The film had nine songs in total. While shooting the next film, Devika Rani took a fancy to the hero Najmul Hussain and eloped with him. She was tracked down and convinced to come back, but Najmul had to be replaced with a new hero, a young lab assistant at Bombay Talkies named Kumudlal Ganguly, who was given the name Ashok Kumar. Saraswati Devi’s next project as music director was the much-hyped Achyut Kanya (1936), starring Ashok Kumar and Devika Rani. That film 85 years ago took India’s caste system head-on as it depicted a Brahmin boy falling for an “untouchable” girl. The song Main ban ki chidiya ban ke became a rage - probably the earliest Bollywood song that is still quite popular (or at least familiar) among music lovers. Saraswati Devi is known to have spent hours rehearsing the song.

Saraswati was facing a unique set of challenges, which was very different from those faced by her contemporaries like R.C. Boral, who was the in-house music director for the Calcutta-based New Theatres. Boral was dealing with actors who were already accomplished singers, the likes of K.L. Saigal, Kanan Devi, K.C. Dey, Pahari Sanyal et al. Saraswati Devi, on the other hand, was stuck with non-singers like Ashok Kumar, Devika Rani, and Leela Chitnis. She had to continuously train and rehearse these actors so that they are able to deliver the songs in the best way possible. Two other women turned music directors around the same time: Ishrat Sultana and actress Nargis’ mother Jaddan Bai. None of them were quite as prolific and successful as Saraswati Devi. This was also the time when she experimented with playback singing - which allowed for a professional singer to perform the song while the actor would just lip-sync.

Boral is credited with introducing the technique with Dhoop-Chhaon (1935), but around the same time, Saraswati Devi experimented with it for a film. Again, there are multiple variants to this anecdote. In one, her sister Manek a.k.a Chandraprabha was supposed to be on screen for a song of Jawani ki Hawa, but she had a sore throat, so Saraswati Devi stepped in to sing it for her. In another version, it is said the song Kit gaye ho khaywan-haar from Achhyut Kanya was where she first made use of playback. Whatever the truth be, the fact remains - the person on screen singing Kit gaye ho khaywan-haar is not Saraswati Devi, but the voice was hers. Was it Chandraprabha playing the old lady humming the song?

After the stupendous success of Main ban ki chidiya ban ke from Achyut Kanya, Saraswati Devi’s hit-parade continued with Jai jai Janani janmabhoomi from the film Janmabhoomi (1936) - one of the earliest patriotic songs recorded during the British Raj. The song became such a big rage that BBC Indian News Service picked it up as its signature tune. There were others, Meera ke jeevan ki soon paid re sitar (Kangan,1939), Man Bhavan lo swan Jaya re (Bandhan, 1940), Jhoole ke sang jhoolo (Jhoola, 1941) and one of her most popular compositions of the era, Chal chal re naujawaan from Bandhan. Saraswati recorded the four songs for Nav Jeevan (1939) in the voice of Hansa Wadkar, the legendary singer actor-singer from Maharashtra whose biography Sangte Ayika inspired Shyam Benegal’s Bhumika (1977).

After the power struggle and subsequent disintegration of Bombay Talkies following the death of Himanshu Rai, Saraswati Devi freelanced for a while working with the likes of Sohrab Modi. By 1950, she decided to hang up her boots and teach music to children. Thirty years later, Saraswati Devi died in penury and complete obscurity. For generations after her, men dominated the music scene, despite the stellar work done by Usha Khanna through the 60s, 70s and 80s. It is only now that women are rightfully taking their place as star composers, with Sneha Khanwalkar (Gangs of Wasseypur), Rachita Arora (Sacred Games), Alokananda Dasgupta (Sacred Games, AK vs AK) and many others joining the fray.

Two of Saraswati Devi’s songs have stood the test of time more than others, often cropping up on Instagram and YouTube, but she is almost never credited in any of those. Ashok Kumar’s debut film Jeevan Naiya (1936) featured a song by him called Koi humdum na raha. Ashok’s younger brother Abhaas aka Kishore Kumar grew up listening to it. Many years later, the legend goes that while doing the compositions for Jhumroo (1961), Kishore Kumar challenged his brother that he would sing it again, and it would be a much better rendition. Seven years after this, Kishore was again lending his voice to an old song composed by Saraswati Devi for Jhoola (1941), that went, Ek chatur naar kar kar singaar. This new version, of course, was featured in Padosan (1968).

(Amborish Roychoudhury is a writer, National Film Award winner, biographer and general filmi sociopath. He is currently working on the authorized biography of the veteran Indian filmmaker, Raj Khosla.)