When Shahid Kapoor slapped Kiara Advani there was a massive outrage among people as to why was a guy being shown slapping a girl onscreen. Now, in Kapoor’s upcoming ‘Jersey’ we see Mrunal Thakur slapping him in the trailer. Why no outrage on this slap? 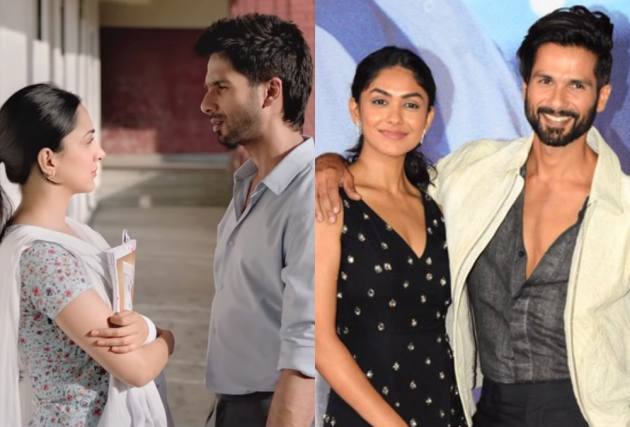 Remember how there was huge outrage on social media back in 2019 when actor Shahid Kapoor as ‘Kabir Singh’ slapped actor Kiara Advani as ‘Preeti Sikka’ onscreen? It was made to look like a patriarchal thing and people online went ballistic talking about can such a popular actor go ahead and show such a thing onscreen. While on one hand, people were talking about the toxic masculinity shown onscreen, on the other hand, the makers of ‘Kabir Singh’ kept going to the banks with pots filled with money, as the film went on to become the highest-grossing film of that year – a record which was later broken by ‘War’. Still, the film remains the second highest-grossing Hindi film of the year.

In every interview post the success of the movie, Kapoor was asked about the slap. He was made to talk about the entire angle of pseudo masculinity shown in the film. Kapoor in a very dignified way always used to answer with reference to ‘Kabir Singh’ being just a character that was written in a certain way, and that’s why the character behaved onscreen in that particular way. Even director Sandeep Reddy Vanga had to bear the brunt of an enormous amount of influx of hatred for writing and directing that scene. He too gave a reason quite similar to Kapoor and said something to the tune that it was just a character and we do have similar characters in real life as well.

Not only them but other actors like Manoj Bajpayee, Taapsee Pannu etc had also been asked about what was shown in the film was it right or was it wrong. They were asked and made to answer about whether they would pick up such a role. Depending on the celeb's answer, the audience would make a completely uninformed judgement about that actor's inclination in the ‘Kabir Singh’ controversy.

Things escalated to such heights that director Anubhav Sinha capitalised on the entire situation and went on to pen a story about domestic violence, and named it ‘Thappad’, which many on social media took as a response to the ‘Kabir Singh’ slap incident. While ‘Thappad’ was one of the finest films of that year, once again during the promotions of the movie, questions about ‘Kabir Singh’ started to rise. Pannu had to answer questions about the slap controversy, and what she would have done in such a case and whether or not she would pick up such a character.

Cut to two years later. A few days back the trailer of Kapoor’s very next film, ‘Jersey’ was released. This too is a remake of a Telugu film of the same name, just like ‘Kabir Singh’ was of ‘Arjun Reddy’. In the trailer itself there is a slap scene, but this time with a difference. Instead of Kapoor slapping the lady, it’s the lady, in this case, Mrunal Thakur, who can be seen slapping him. Quite a few days have passed to this trailer having been released, but there is hardly any outrage around the slap this time around.

Why No Outrage This Time?

I wonder why there is no one going on social media and blaring out loud that such slap scenes show a very narrow-minded patriarchal society! Like people did with the ‘Kabir Singh’ slapping scene. Or is it completely okay with the Indian audiences and the intelligentsia of Bollywood, that if a guy gets slapped by his girlfriend or wife, it’s completely okay, while when it’s the other way around, it’s not at all acceptable? As we keep talking about equality, shouldn’t the outrage for both the sexes be equal? Food for thought!