In an exclusive interview with Outlook, 'The Sky is Pink' director Shonali Bose remembers how the death of her sixteen-year-old son influenced her in painting the colour of the sky with the hues of her life. 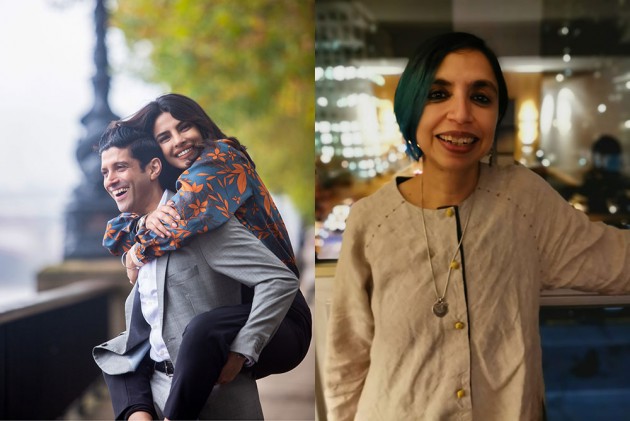 Shonali Bose’s directorial The Sky is Pink is a rollercoaster of emotions that celebrates love and relationship in our lives. It is a story of a family that never gives up despite all the odds and an amazing love story of a couple that traverses decades and continents, told through the lens of their sassy, sardonic, spunky teenage daughter, Aisha. In the interview she talks about her son, Ishan who died nine years ago.

The meaning of title, The Sky is Pink…

I found a beautiful metaphor in this real incident where a mother teaches and encourages her child to think out of the box and not be bound by society’s restrictions and preconceived notions. The Chaudhary family as a whole is exemplary in the way they have handled their situation.

For me the Sky also represents the vastness of the Universe and the myriad souls who reside there. It represents light and love. I look up at the sky and talk to my own son Ishan who died when he was 16- years- old (nine years ago). And I get solace. I have also been bold in my own life with how I painted my own sky. I want people to take this from the film – make your own future; paint your own sky. Har Ek Ka Apna Sky Hota Hai. What colour is your sky?

It’s based on a true story. How did this influence you to make a film?

As a filmmaker I am drawn to real life stories and events. I like to create powerful dramatic narratives out of real stuff that can impact people when told in the right way. When the Chaudhary family approached me and narrated their life story, I was drawn to how inspiring it was. I was drawn to how ordinary people when faced with extraordinary circumstances rise to the challenge. I was drawn to a mother taking on the medical establishment to be empowered and informed about the right decisions for her child. I was drawn most of all to an unbelievable love story between two people who fell in love when they were only 16 and now at 57 are still inseparable and in love despite major tragedies that tear most couples apart. I wanted to make an unusual romantic film and their story was exactly that. Everything in this film is pretty much exactly as it happened.

How did this kind of family story come to your mind?

I was approached by Aditi Chaudhary to make a film about her daughter Aisha. This was ten months after her death in 2015. She told me that Aisha had watched the trailer of Margarita with a Straw thirty times and said “I hope I live to see this film”. However, she died a few weeks later. I heard what Aditi had to say and told her that I was more interested in telling the story of the parents who lost the child rather than the child/teenager. I myself had lost my teenage son and learned a lot from it and the “grief work” that I did. I was interested as a writer in exploring this subject and bringing some of my own unique perspective to it.

Why do your films always have big stars in spite of not being regular commercial films?

Wow! That’s really funny(laughs Shonali). I wish I had big stars in my previous films, then I wouldn’t have had to struggle so much for money to make them. In this film as in my prior work – Amu, Margarita with a Straw , I always choose actors who are best suited for the roles I write.

Konkona Sen Sharma had to audition for Kaju. She was little known in the Hindi film industry at the time that I cast her – and far from being a big star. I auditioned 100 girls mostly in America as the character was Indian American and I wanted the authentic accent. Koko blew me away with her ability to mimic a different accent and body language in a nuanced way (just as she did in Mr and Mrs Iyer).  I am so glad that since then she has made huge strides and been accepted in Bollywood and not just her native Bengali cinema.

Kalki Koechlin was one of only three actors in Bollywood (out of 160 auditioned) who showed me in their audition that they could do ten percent of the role innately. And then she was the only one who understood, appreciated and committed to the need for four to six months of rigorous training to master the remaining 90 percent, with no other distraction including even a one day commercial. Kalki’s performance has been called Oscar worthy by people worldwide. It is sublime. Unfortunately, her talent is not fully recognized and she is not considered a big star as the financing for this film was crippling (same for Amu) and it was not only because of the subject matter. I was told that they wanted an A list star. I didn’t think any of our “A list stars” were right to play this character or could do it with the brilliance that Kalki did. With Koko I was told I would get the funding if I replaced her with an A list male star. By the time of Margarita – it seems that at least gender had improved its chances in Hindi cinema!

In casting for The Sky is Pink, Priyanka and Farhan were my first choices for the characters I had written. They were perfect. I would have cast them as actors even if they were not big stars. And I don’t think there are lesser stars as suited to these roles as they are. They too like Kaju and Laila got completely into the skin of their characters and are brilliant.

My favourite part of directing is working with actors; pushing them to their maximum and making them plumb their deepest selves and be naked for camera to give truly honest, authentic, spectacular performances. I hope you see that in my work. Even if you hate my films – my actors shine. I hope I always cast in an equally honest way as I have done in my first three films.

How do you think your film is going to help or educate those suffering from pulmonary fibrosis?

Well first of all let me clarify that I didn’t make this film with any messaging in mind or to help anyone. If that is the end result then I will be very glad. But I am not here to preach something through this or any film. Secondly the primary illness in the film is actually S.C.I. D (Severe Combine Immune Deficiency). Its related disease is pulmonary fibrosis.

I think the positive outlook on life that the Chaudhary family had is something that can help everyone – whether sick or not. To take each moment and live it to the full. Aditi wanted her daughter’s epitaph to say – “She Lived.” The family focused on LIFE instead of DEATH. We all will die – but what do we do with our living moments – worry about death or enjoy what we have, whatever it might be, whatever the hardships. I too as a person focus on the positives of every situation and feel gratitude. When you feel sorry for yourself and think of yourself as a victim then it’s all over. Be joyous with even the smallest gifts life may give you. It’s just a journey you have to go through from birth to death. Make that journey pleasant for yourself and for others. Be curious about what can happen on the journey. Even if it’s something bad, learn from it. It is there to teach you.

I am explicitly telling you my philosophy and the Chaudhary’s way of living – but I did not set out to teach you anything. I don’t like doing that. I am simply showing you certain characters with certain relationships and things that happened to them. The fact that they are absolutely real and nothing is made up, may give you food for thought and inspire you a little when you go home!