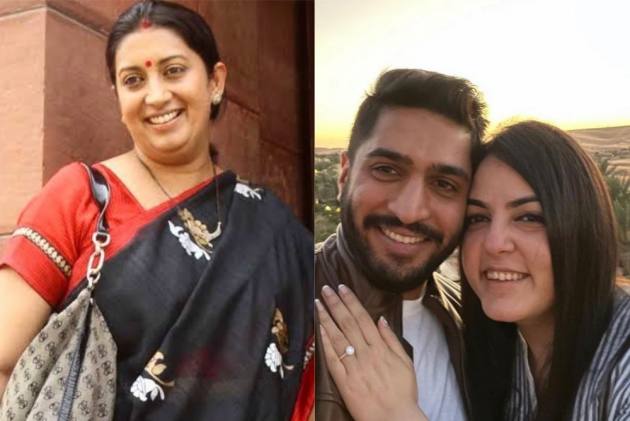 On December 25, Union Minister Smriti Irani turned to social media to announce her daughter Shanelle Irani's engagement. Irani, a proud and overjoyed mother, shared images from the engagement along with a humorous statement.

Shanelle Irani was proposed to by Arjun Bhalla, who got down on his knees for the auspicious occasion, at a lovely spot. The second photograph is of the 'just engaged couple' taking a joyful selfie.

Smriti Irani’s daughter Shanelle Irani is engaged to Arjun Bhalla. The former actress, who is known for her iconic role in 'Kyunki Saas Bhi Kabhi Bahu Thi,' wrote: "To the man who now has our heart @arjun_bhalla welcome to our mad cap family .. bless you for you have to deal with a crazy man for a father in law & worse .. me for a Saas … (you have been officially warned) God bless @shanelleirani #newbeginnings."

Smriti Irani, who is known for her humorous memes, kept her wit while congratulating the newlyweds. On Smriti Irani's social media post, a slew of celebrities wished them well.

Smriti Irani became an overnight star and one of the most loved bahus after playing the character of 'Tulsi Virani' on the hit show 'Kyunki Saas Bhi Kabhi Bahu Thi'.