Abhishek Chaubey directed 'Sonchiriya' (Golden Sparrow) may be an understated Beti Bachao film in the year the country goes to the polls with many a slogan to live up to. 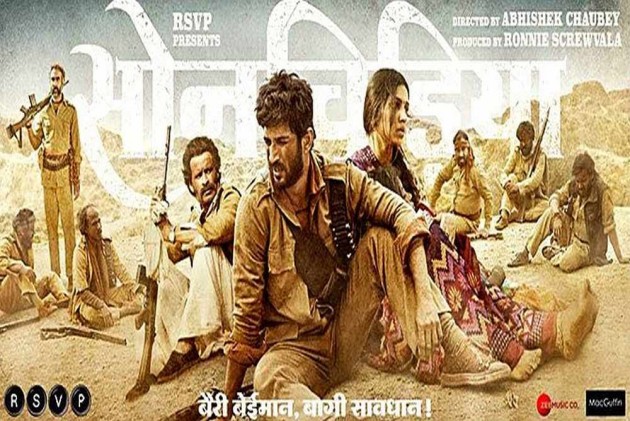 In Abhishek Chaubey's world of rugged elegance, gangsters have hearts and bandits have souls. The blood and gore have a higher scale of conscience. The style, decidedly, could be a cross between an Akira Kurosawa and a Quentin Tarantino. Blood, gore and bullets, yes, but why is there so much beauty and human frailty and vulnerability amidst all that?

The director's Sonchiriya (Golden Sparrow) may be an understated Beti Bachao film in the year the country goes to the polls with many a slogan to live up to. But then, there is so much in the film that is so understated while visibly showing a breathtaking amount of hard work, that you have to praise and pity the director at the same time. A period movie with a star cast that shines through and production values blessed by the generous Ronnie Screwvala is something that deserves more than the usual treatment from the Friday reviewers. It may not be a box-office charmer, but is the stuff of historians and cinephiles.

Daaku movies we have seen before. Sonchiriya may be an intended or unintended prequel to Shekhar Kapur's Bandit Queen, and a parallel to Tigmanshu Dhulia's Paan Singh Tomar, the biopic on the Asian Games athlete who became a dacoit.

Of course, long ago, we had more movies set in the dusty, unforgiving ravines of the Chambal region that sees the intersection of three states: Madhya Pradesh, Rajasthan and Uttar Pradesh. To look back at that era decades after the arrival of relative economic prosperity offers its own insights -- such as dacoits who wielded guns but came on foot to rob the rustically rich.

I was in Dholpur when Bandit Queen was being shot, visiting a banker friend who took me to the pristine waters of Chambal, inside which live crocodiles and outside, baaghis once roamed wielding old rifles and older clan loyalties. The landscape is magnificent with its peacocks and dusty dunes, but then, it took a lucrative mustard crop to alter the wretchedness of the place given to murderful revenge as everyday reality.

The correct translation of the word baaghi would be 'rebel'. The baaghis were not the money-seeking robbers yearning for rich lifestyles. In fact, they were quite the opposite. These were the ones that broke away in a miasmic mix of caste rivalries, socio-economic tensions and sheer toxic masculinity in a land where water was scarce and blood became easy.

There was in them a sense of culture that is part of the folklore. There is prayer. Maa Bhavani blesses cops and rebels alike. Don't call them robbers. Bandits may just be acceptable. In India's answer to Sicily, the original abode of the mafiosi, the honour of one's clan is a common reason for killing, grattitude and sacrifices are of noble intent and murders carry droplets of conscience coagulating in the nether-minds of people such as Lakhan Singh (Sushant Singh Rajput), a protege of Man Singh (Manoj Bajpayee in a guest appearance).

Plots become relatively less important when characters turn loveable. These are men who try not to hurt women, children or even the villlagers who have not crossed their paths in their journeys of loot and vendetta. It is here that the director rises above the ordinary ways of Bollywood to tell us a story with a soul that goes beyond the familiar myth of the fair-playing bandit. Real characters speak the rustic Bundelkhandi dialect. The camera zooms from a distance, towers from above and crouches close to earth to shoot on unsuspecting metaphors that complete the picture. A dead snake, a silhoutted crocodile in still waters, and hideaway mustard fields become an extension of the characters. Surprisngly, there is no trademark peacock shot to establish the Chambal legend. No kitsch or cliches, perhaps.

It takes a lot of hard work. From Bhumika Pednekar trying to be a bold-woman of lower-caste origin to Ashutosh Rana being the trigger-happy cop and Ranvir Shorey essaying a fierce loyalist bound by unquestionable caste affiliation, there is a casting coup that should be spoken about.

Did I notice in a comic scene where gangsters and cops check out each other a striking resemblance to Steven Spielberg's Munich where a Palestinian gang and Israeli assassins stumble on to each other amid Greek ruins? Did I see in the cop played by Rana shades of a Tarantino flick with a penchant to show unspoken ruthlessness? Did I see in the play of conscience elements of a Tolstoy? All this in a land that preaches the values of Ramayana and practises that of the Mahabharata.

In the middle of this tale overly laden with bullet and abuse-spewing men, the focus is on girl-children and women. Sonchiriya is a child who survived rape and must live. She is also a metaphor for the elusive ideal that everybody hunts in the movie, as elegant lyrics set to Vishal Bhardwaj's music and Rekha Bhardwaj's voice tell us in a parallel narrative of reflection. One is tempted to ask if there is an allegorical allusion to jehadis or nationalists in an elusive search of the nostalgic glory of the times when India was supposed to have been a Golden Sparrow. But then, what we see are human strengths and frailties. It is for us to extend the logic of familiar psyches and locate them in different contexts.

There is Phuliya, and we are never told throughout the movie -- not even in the final curtain-call note -- that this woman is the storied gangster Phoolan Devi who went on to become a member of the Lok Sabha after surrendering to the police. If that contrasts the magnificent cinematography that romances half-built mud walls and hovering vultures alike, you know it is a conscious decision not to be trite. It is almost as if Abhishek Chaubey wants to be so hatke, that he understates deliberately. You have to love him and leave him for that boldness. Here is a director whose technique and narrative mastery can easily produce big hits in a world of chewing-gum dramas. But he won't. There is a screw aesthetically loose somewhere.