Not just on Twitter, Bollywood celebrities took to the streets of Mumbai to raise their voice against the JNU attack that took place on Sunday night. 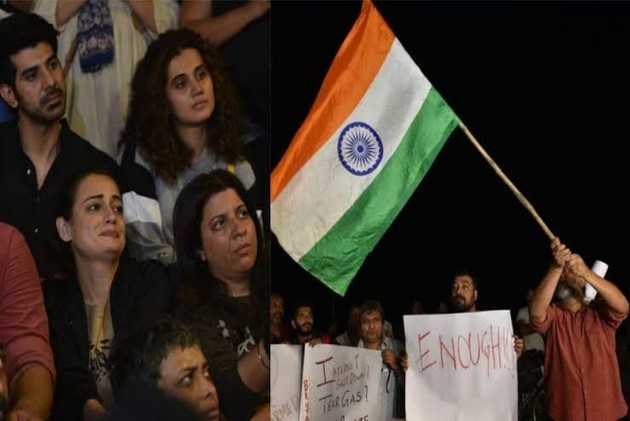 Bollywood celebrities are very vocal on social media and are condemning the attack on JNU students on Sunday. From Taapsee Pannu, Sonam Kapoor to Amitabh Bachchan, everyone has been tweeting in support of students on Twitter. The brutal attack on the student in JNU campus sparked outrage and protest all over the country. Even Bollywood celebrities took to the streets to perform a peaceful protest against the violence at Carter Road, Mumbai. Celebrities like Dia Mirza, Taapsee Pannu, Anurag Kashyap, Zoya Akhtar, Vishal Bharadwaj, Swanand Kirkire, Richa Chadha, Anubhav Sinha, Gauahar Khan, and others joined the protest and extended their support for the JNU students.

The celebrities not just sat there to extend their support but came up with poster and also sang songs that justified their opinions. Filmmaker Anurag Kashyap held a play card that read, ‘Enough’. Popular lyricist and singer Swanand Kirkire also sang for peace during the protest. Filmmaker Vishal Bhardwaj and his wife singer Rekha Bhardwaj sang Aao Na song from his film Haider.