Taapsee Pannu: I Didn't Use Any Steroids To Build Muscle

In an exclusive interview with Outlook on ‘Rashmi Rocket’, Taapsee Pannu says, ”I didn’t use any steroid to get that kind of body that was required because I know that I have a life beyond films and I can’t really risk it for one film.” 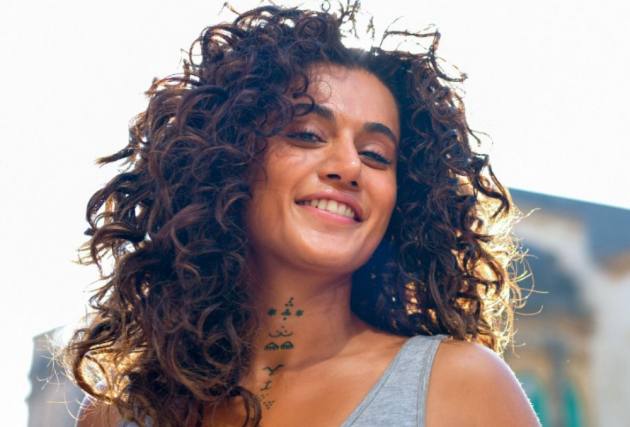 Taapsee Pannu talks to Outlook’s Lachmi Deb Roy on her preparation for the role of ‘Rashmi Rocket’, how mentally taxing it was and how challenging it is to play the role of a woman athlete who is born with the genetic abnormality of a higher testosterone level. She talks about her daily routine during the preparation for the role, the diet that she had to go through and the struggles of being a woman athlete. Excerpts:

It must have been a real herculean task preparing for the role of ‘Rashmi Rocket’, tell us a little bit about your preparation…

You rightly said, it was a herculean task for me because I have never really been to the gym before tough I was always fond of sports. I have been a sprinter during my school days. But after my school, I didn’t really keep up with the sports as such. And the role that I was playing was of a special kind of a sprinter who had extra testosterone levels in her body so that resulted in me building up a particular kind of body. Hence, the requirement of going to the gym and building a certain type of body which doesn’t look regular or usual was required which was tough. It did require some extreme discipline, so much so that I didn’t really have a life in that one year from the time I started prepping up for the film till the time I finished the shoot. Apart from the five months of lockdown in between, I had no rest. My life revolved around going for shoot and workouts.

During the lockdown, how did you manage to do the physical training bit, did you make some makeshift gym at home?

I don’t think I was prepared for this long lockdown. It started with that two-week, three week and it kept on extending. I was not anticipating it to be this long. Otherwise, I would have made a makeshift gym at home. My role required heavy professional weight lifting training to build and maintain that kind of physique was not an easy task. So, there was a lull period in my training. The whole idea of hitting the gym and getting ready for the role was a big question mark. It was really heart breaking for me too because there was no guarantee as to when will we go back to shoot. And I had taken up the responsibility to main a certain specific body for a specific role. This was a big challenge. During the lockdown I couldn’t do much weight training. I just made sure that I stay active during that period.

You had to go through rigorous physical training, how much of toll does it take on the body?

My body was liking it a lot. But it was a sudden shock in the beginning because suddenly I started pushing it so much. Mentally I was getting drained out to follow that kind of routine. From the beginning when I started building my body for this role, I was very clear that I am not going to use any kind of short cut. So, I didn’t use any steroid to get that kind of body that was required because I know that I have a life beyond films and I can’t really risk it for one film. Every thing was organic and body slowly and steadily got into its own groove naturally. The muscle memory was also good, so when I restarted the workouts, my body resumed and came back to where we left quicker than what I have anticipated it to. Since, it was done in a clean organic way my body metabolism shot up. Now also I could maintain some of the muscles and the body that I have made. I am still continuing a descent regime if not the rigorous one that I was doing while preparing for the role.

How mentally challenging was the preparation?

My motivation to do go through this rigorous training everyday was that someone else has put their money on me. It’s not with my money that I have enrolled in the gym and hired a trainer. There is someone else who had the trust in me and had spent their money on me having the belief in me that I can do it. So, that kind of pushed me every day before sunrise to get out of my bed in that whole weather of 6 degree in Uttarakhand in the month of January to push myself to go on track when there was so much of fog that it was difficult for me to see the finish line to the front line. I was the first one to open the lock of the gym every day and finish it before the regular people started coming in. The other motivation was that ‘Rashmi Rocket’ was going to be the first of its kind female athlete film. I really love sports and I am always in awe of sports stars. I don’t want them to feel that they have been wrongly represented.

Difficulties of shooting ‘Rashmi Rocket’ during the pandemic.

The shooting was shot in between the first and the second wave and hats off to Pranjal, our producer to pull off a film that required so much of out door. It not one of those small indoor films. It is a big outdoor film with a very big crew size. The kind of battles we fought to do the film can make for a story by itself. From the time of training us during the time of lockdown when there was no ground open and getting permission to allow us to practice. Then we realised that Bhuj was flooded and we couldn’t get the white sand on time. So, the entire schedule where we were supposed to start with Bhuj, it ended up being the last shoot because the salt pans ere flooded and we couldn’t shoot. There was no road travel or railway travel open at that time and flight tickets were getting cancelled in the last moment because of there were a lot of limitations in travelling. This was taking heavy toll on the budget of the film.

Challenging part of the film…

The climax sequence because I think emotionally that was most triggering for me. Th physical struggle was over before I started shooting. But to be in the shoes of someone who has to prove that she is a woman was very draining. And by the time I reached the climax of the film, that’s the sequence I heard for the first time when I said yes to the film. That was the sequence that kept me driving throughout without anyone knowing or thinking of how I am going to do it.

I had a fabulous dietitian called Munmun Ganeriwal. People expect that to have this kind of a body you need to have really high protein and no carbs and there will be a lot of restrictions. But that was not the case with me. I did have high protein diet, but I had carbs too because I had to run. So, every meal of mine had a decent amount of carbs in it because I had to build up the energy in me to sprint because eventually the film is about sprinting. Yes, I was deprived of my favourite meal like Chola Bhature which is okay. But it is not like she deprived me of having basic dal chawal and roti. I had all of that. I even had sweet potato parathas for my breakfast. I had good carbs and I never really felt starved. Though I missed cakes and fried food.

The struggle that women athletes go through…

There is a lot of struggles that athletes go through because most of these athletes come from smaller cities and towns. They also come from relatively humble backgrounds. But this particular film talked particularly about a female athletes because their struggles go beyond the struggles of regular athletes. Coming out and mentioning about their desires to play outdoors is also quite a task for them and for others to accept you on the fields. And God forbid if you are born with genetic abnormality of a higher testosterone level than any other average female then being a female is also questioned. And then you end up failing the gender test and the test that only happens to women. This is something that is not in your control and you are asked to stay away from a women’s race. These kinds of hurdles are very female athlete specific.