Teacher’s Golden Thistle Awards are billed as a celebration of authenticity in the fields of business, sports, entertainment and arts and culture 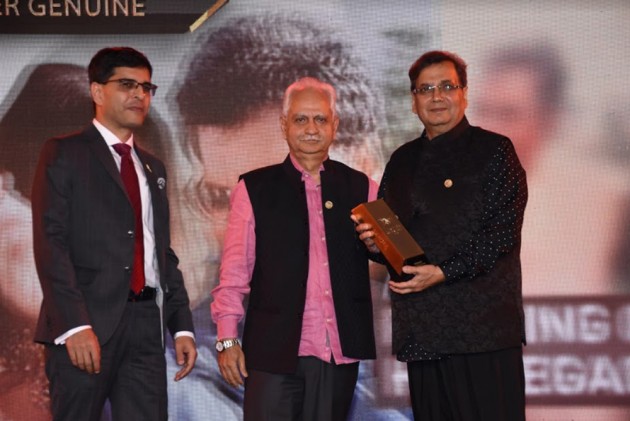 Bollywood celebrities Ayushmann Khurrana, Nushrat Bharucha, Jim Sarbh and Remo D’Souza were among a host of achievers who were conferred the prestigious Teacher’s Golden Thistle Awards. At a glittering ceremony organised in Mumbai, veteran producer-director Subhash Ghai was also given the ‘Forever Genuine’ award for his lifetime achievements in cinema.

Teacher’s Golden Thistle Awards, billed as a celebration of authenticity in the fields of business, sports, entertainment and arts and culture, are given away as a tribute to those achievers who have remained true to their craft and have dared to dream and pursue their passion despite all odds. The awards are conferred in altogether seven categories, including three special awards curated to encourage and celebrate “Genuine Spirit”.

Ayushmann Khurranna, who could not make it to the ceremony, was bestowed the award in the category of entertainment ‘for having created a mark for himself in the hearts of movie lovers due to his hard work, passion and versatility by continuously challenging himself every time he essays a new role’ while his Dream Girl co-star Bharucha got the GQ Most Stylish Woman award for ‘breaking onto the Bollywood fashion stage with her elegant and clean style, always finding herself on everyone’s style radar.’

Sarbh of the Neerja and Padmaavat fame received the same award in the men’s category ‘for portraying varied characters on screen with equal ease and grabbing the limelight off-screen with his charming personality and quirky fashion sensibilities’. In a Special Category for entertainment, noted choreographer, Remo D’Souza was also awarded ‘for his immeasurable talent, humility and contribution to the Indian entertainment industry’.

Subhash Ghai, ace filmmaker known for some of the biggest Bollywood hits, received his award for his outstanding contribution from Sholay director Ramesh Sippy.
On this occasion, Teacher’s Golden Thistle Award for being Forever Genuine (Lifetime Achievement) was also conferred on Hemendra Kothari, noted investment banker ‘known for creating a positive impact on 120 national parks and reserves across India’. In sports, Pankaj Advani received the ward ‘for his immense contribution to billiards bringing it to the mainstream, in a country where cricket is the only religion in sports’.

Among others who were awarded on the occasion was entrepreneur Yashish Dahiya in the business category and celebrated chef Manish Mehrotra for ‘having brought the best of Indian cuisine - colour, culture and taste - onto a modern platter’. Neerja Birla received the award for Genuine Impact (Growing for Good) ‘for her devotion to sensitise India on the importance of mental health both from an individual point of view as well as desensitising masses to the various stigmas attached with it’.

The host for the evening, Cyrus Sahukar, took the audience through the stories of the winners, their achievements and the journey culminating in this special recognition. The audience included who’s who from different fields such as Rahul Bose, Manjit Gill, Geeta Chandran, Sandeep Arora, Ayaz Memon, Arjun Bajwa, Sabbas Joseph and many others. “Today’s Indian is evolved and aware, looks beyond the surface of commercial success and inspires the society with their genuine will to win and grow for good. It is only right that we celebrate and recognise these accomplishments with the Teacher’s Golden Thistle Awards. The awards celebrate stories of rare individuals who dared to dream big and truly inspire. This platform attempts to encourage a new generation with the courage and confidence of achievers who are rare to find and genuine in their entrepreneurship, craftsmanship and sportsmanship,” said Mr. Neeraj Kumar, managing director of Beam Suntory India, which organised the event in collaboration with co-sponsors.