Many details that are in public domain are given importance in 'Thalaivii', but many lesser known or unheard of details remain omitted with not even a passing mention in a film that calls itself a biopic. 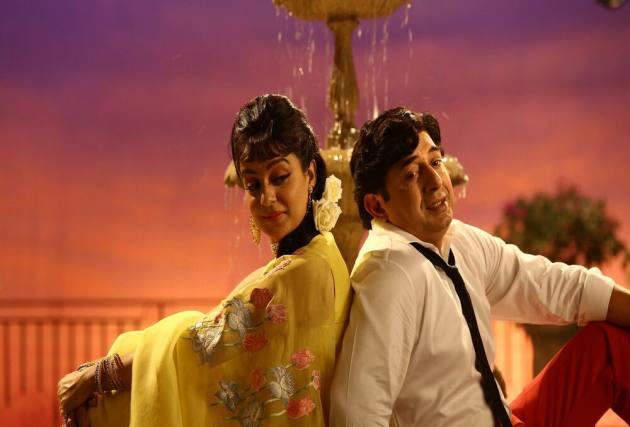 Any biopic made in India, with the exception of Attenborough’s 'Gandhi', of course, is bound to disappoint viewers for the sole reason that they may be considered original screenplays, but despite using source material from biographies, memoirs, newspaper and tabloid stories etc. nearly all of them have rarely been faithful adaptations. If truth be told, all of them are hagiographies since the primary focus is to present before the audience a carefully crafted tale that only eulogizes the subject and remains a one-sided view throughout.

After holding centerstage all through the year Kangana Ranaut is back in the biopic of J Jayalalitha, the actor turned politician who ruled for years in Tamil Nadu as the chief minister. The 153-minute-long film 'Thalaivii' made in Hindi, Tamil and Telugu, covers the rise of a young girl Jaya (Ranaut) who gets pushed into acting in Tamil cinema on the insistence of her ambitious mother (Bhagyashree) and gets entrenched into the political world when the superstar MG Ramachandran (Arvind Swamy) who himself gets lured into politics.

The film is based on the six-time chief minister of Tamil Nadu who ruled for 14 years almost unopposed and has been directed by AL Vijay. Jayalalitha’s personality was such that it demanded a much varied approach to her reign as it was marked by crests and troughs that saw her rise to dizzying heights, and subsequently fall rapidly to degradation. Despite several benevolent welfare schemes that she was credited with, there were allegations of corruption and charges of censoring the media, ruthless ousters of party members etc. that put her in the dock consequently.

As an inexperienced docile young girl, she doesn’t always get it right. Or has it easy. When MGR evinces a keen interest in her, his manager and producer R.M Veerappan (Raj Arjun) makes no bones about his dislike for her and leaves no opportunity to run her down. Not that it bothers her; she is too smart and often snubs him in her own charismatic manner. Her confidence stems from the fact that even MGR reciprocates her feelings, and is forever willing to help and support her in every which way. Their intimacy is never exposed or revealed in a manner that suggests that the two are more than good friends and great co-actors.

When she gets inducted into the political party on MGR’s insistence, she begins to call the shots that eventually helps her to become the chief minister of Tamil Nadu. Here, Ranaut never ever seems to internalise all the vicissitudes of such a hard working lady who had such an eventful and hectic life. In her physical transformation, she is spot-on and in shape – depending on the stage of the star politician’s life and career, but it all appears only cosmetic and synthetic!

The problem with a film like 'Thalaivii' is Kangana Ranaut who may be an asset considering her box office status and several national awards under her belt, but as an actor, she  displays only the superficial aspects of the great leader Jayalalitha’s personality, and never allows us a glimpse into the person that she really was. Her somewhat mysterious death had left a vacuum in her party, the All India Dravida Munnetra Kazhagam, and her legacy seems to continue to be of immense interest among her fans and foes alike.

The entire length of the film shows events associated with the leader’s life as if they were listed in a series of numbered and bulleted listicle in trying to establish the meteoric rise of the actor-politician. Her journey of a woman deserved a better approach since she became successful in a world dominated by men. And it wasn’t as if she compromised and lowered her dignity. On the contrary, with a sharp mind backed by good formal education, she always held her own and kept her self-worth, poise and pride intact.

There are a lot of incidents in her illustrious career as an actor who ruled and reached the pinnacle of success. Starting with her entry into films and the role that she bagged in an MGR film, the narrative does include many episodes of her life. How her fondness for MGR led to a close bonding between them that angered his wife Janaki (played by Madhu in a minuscule role) could have been explored. Sadly, many details that are in public domain are given importance, but many lesser known or unheard of details remain omitted with not even a passing mention in a film that calls itself a biopic.

The end result is so chaotically put together that it turns into a mishmash of events, occurrences, confrontations, clashes and skirmishes of a life that fails to excite the viewers. The focus is on the star who portrays the star politician with tremendous ambition, grit and determination to rule. Almost the same ambition is seen in the star performer Ranaut who essays her fiery desire to prove her detractors wrong . She has been in the news for mostly all the controversies her tweets and statements generate, and in turn, make her unpopular with the masses.

If there is any take-away from the film, it is Arvind Swamy’s sincere performance that stays with you!