The ‘Break Point’ Of Mahesh Bhupati And Leander Paes

In conversation with the filmmaker couple Ashwiny Iyer Tiwari and Nitesh Tiwari on the series ‘Break Point’ featuring Mahesh Bhupathi and Leander Paes’ partnership and split on the tennis court. 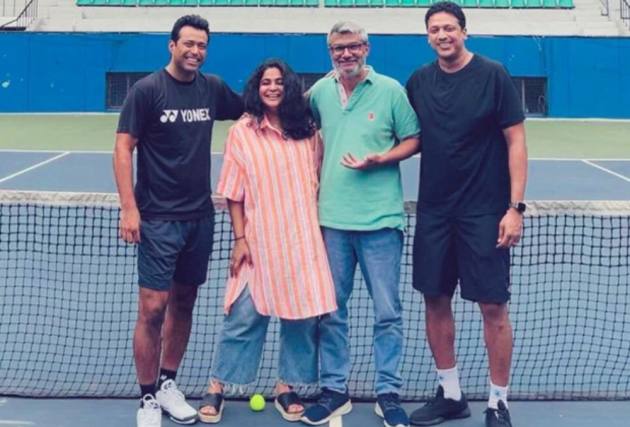 ‘Break Point’ tells the story of Leander Paes and Mahesh Bhupati and how they went from the perfect tennis pair to those who were not in touch with each other for years. It tells a narrative on their friendship, brotherhood, partnership, belief, hard work and ambitions which made them one of the most feared doubles pairs, Leander Paes and Mahesh Bhupati during the late 1990s, and even ranked world number one in the year 1999. In a conversation with Outlook, Ashwiny Iyer Tiwari and Nitesh Tiwai talk about the reason behind making this web series.

‘Break Point’ is a story about two young Indian boys who grew up in India with a dream. The series narrates certain aspects between Mahesh Bhupati and Leander Paes which were left unsaid for twenty years. Directed by the filmmaker couple Nitesh Tiwari and Ashwiny Iyer Tiwari, the series will explore the relationship between Indian tennis stars Leander Paes and Mahesh Bhupathi. Excerpts:

Why is it called 'Break Point'?

Ashwiny: Nitesh Tiwari, our co-writer Piyush Malhotra and I felt that ‘Break Point’ is a common term used in tennis and since we are talking about tennis with a doubles champion here, we wanted to have a name which would resonate as to why are we telling this story and on which context we are telling this story.

Why did you think it was a good enough story of Leander Paes and Mahesh Bhupati to make it into a series?

Nitesh: What is most important is to be able to tell a story from which we could take out a lot of beautiful stuff. We had endless chats with Mahesh and Leander separately and then both of them together. There were so many things which came out sitting together, chatting about a sport which was actually considered to be a white man’s sport, making us believe that we can also do it even with all the challenges thrown against us.

Ashwiny: There is a humane touch to the story too which talks about friendship, living in each other’s arms and then dreaming together and again a great lesson for all of us. We prepare ourselves so much for success that we don’t know what to do after we reach that level. There are a lot of beautiful dos and lots of beautiful don’ts that you will uncover as you watch the breakpoint. As a storyteller this beautiful human side with tennis as a backdrop is something that really fascinated us.

What was the most challenging bit of the show?

Nitesh: From the word go to the end, I think everything has been extremely challenging. This is the first time we are dealing with something that was unscripted. We structured it from our end with our conversation with Leander and Mahesh, but we had no idea as to what is going to come our way. Putting it together in episodes and yet making it entertaining, engaging and wanting the audience to the next episode has been the most challenging bit of it.

How authentic is it?

Nitesh: We didn’t take any cinematic liberty; it is hundred percent authentic. You will be hearing this story from Leader Paes, Mahesh Bhupati and those who are associated with them.

Is there any uniqueness of the show that you all wanted to highlight?

Ashwiny: I do feel that beyond a sport there is a humane-ness behind it because you will always see sportsmen in their most aggressive avatars. It was nice to see different emotions which were real and also a lot of meltdowns.