The Forgotten Army Concert With 1,046 Performers Sets A Guinness Record 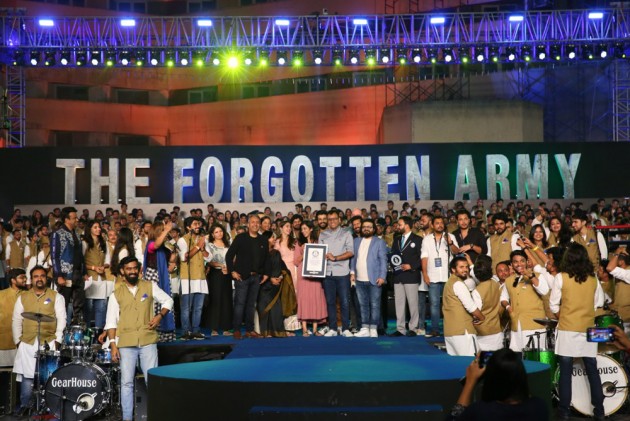 A live operatic musical extravaganza with 1,046 singers and instrumentalist coming together to perform the album of Amazon Original Series, The Forgotten Army has made it to the Guinness Book of World Records.

The music album of The Forgotten Army: Azadi Ke Liye marks the digital debut of its composer Pritam and popular playback singer Arijit Singh. Directed by National Award-winning film-maker Kabir Khan, The Forgotten Army was launched across 200 countries and territories on January 24.

The evening saw 1,046 musicians from across the country coming together to perform songs, composed by Pritam, which served as a prelude to the celebrations for the 70th Republic Day.

Gaurav Gandhi, director and country general manager, Amazon Prime Video India, says that the live musical evening was a humble tribute to the Azad Hind Fauj. “The show endeavors to bring back to public memory, the long forgotten sacrifice of the brave Indian National Army (INA) soldiers,” he says.

Expressing delight that the concert made it to coveted Guinness records, he says that the album’s anthem on freedom called Azaadi will strike a chord across the country, as it is a tribute to all the Indian soldiers– those remembered and cherished and those forgotten.

Commenting on the musical event, Pritam says that he was thrilled to have had the opportunity to witness and be part a unique live performance organised in memory of the valiant soldiers of the Azad Hind Fauj. “This Republic Day, let's all take a moment to understand the forgotten history and the sacrifice of the Indian National Army,” he adds.

According to director Kabir Khan, few Indians are aware of the struggles of the Azad Hind Fauj soldiers. “Despite their valour, they became a foot-note in India’s Independence history,” he says. “I vowed to tell their story to India and to the world. On the eve of India’s 70th Republic day, the release of The Forgotten Army is my attempt to take their story to the world. The album from the show captures the very spirit of the Azad Hind Fauj.”

Swapnil Dangarikar, official adjudicator from the Guinness Book of World Records says that itwas a spectacular performance with the highest level of proficiency. “It’s my great pleasure to be here and see and listen to the Largest Indian Cinematic Music band,” he says. “It is a tribute to the heroes of the past. I would like to congratulate Amazon Prime Video for this achievement.”

Musicians performing at the concert hailed from cities across the country - Bangalore, Delhi, Kolkata, Pune, Goa, Assam, Sikkim to name a few . Some artistes also came from other countries such as Kenya, Malaysia and UAE. It consisted over 650 vocalists, 250 acoustic guitarists, 80 drummers and percussionists, 15 performers on varied string instruments, five brass players, one electric guitarist, one bass guitarist, one keyboardist and two sitar players.

The Forgotten Army starring Sunny Kaushal and Sharvari in the lead is streaming on Amazon Prime Video now.