The Goddess And Other Stories

In 2017, I went to Patna to see the goddess. It was a return to a time when we would be up all night to see the festivities. There were all these stories. We heard them again. Over and over again.

n 2017, I went to Patna to see the goddess. It was a return to a time when we would be up all night to see the festivities. There were all these stories. We heard them again. Over and over again.

“Once upon a time in a faraway place where October smelt like burnt wood mixed with a strange longing of a childhood where we heard ghost stories and believed that gods vanquished the demons, where we saw the ten-headed Ravana go up in flames and clapped and yet we returned home to hear stories about Ravana’s desire to build a staircase to heaven for the less fortunate, the ones who had been judged, the outcastes. We learned long ago in that city that there is no pure evil. In the university, we read Shakespeare. The professor always spoke about the tragic flaw. You always felt sad for Macbeth, Hamlet. And when you read about Mephistopheles, you knew he had a soul. And you learned to love all flawed beings who had tragic lives.

This is how home feels like. A place of stories and smells. A place of redemption. A place of love, of old books, of forgotten people, of faded sepia-toned photos, of a million tragedies.

My neighbourhood is changed. Strange unholy looking buildings have come up. One is coloured purple, the next is green. The other is yellow and then there is the garbage dump with the cows and the dogs in perfect harmony with each other feeding on leftovers from homes, plastic and other remnants of urban life. The hostel for boys from the lower caste is now in ruins. A window hangs lose after it parted ways from the hinges. You stand in the corner trying to remember happiness, a lost love, an evening sky full of kites, a house full of people... it seems like the right thing to do in the city in October when the goddess arrives and the air smells of burnt wood and hope. In the City of Perpetual Wait, you listen to stories of two goddesses crying while the crowds play the Dhaki on Dussehra. There is the river where you always believed the goddess lives in. She is returned to the water every year. I almost stepped on a broken piece of her crown the other day on the banks of the river. It must be what the water had pushed away. As a child I wondered the Goddess was drowned in the Ganges. But that’s how you bid farewell perhaps. By the act of dematerialisation. I search for synonyms- dematerialize, disappear, evanesce, evaporate, fade, flee, fly, melt, sink, vanish. Total grandeur at the end. I see the empty pandals and go past the trucks carrying the idols and the women and children lining up on the streets to pay their homage to the goddess.

So, where does she go?

My mother says she returns to her husband’s place. The river carries her. In her days, women went from the house they were born in to their husband’s home. That’s it. I am the daughter who never left. Tell me more stories, I ask her. She does. In bits and pieces. Some are tales from mythology. Others details of the people who once lived here. Nothing complete. That’s how I learned to imagine. To make stories fuller. To fill in the gaps.

You don’t believe these stories but there’s something about homecoming that makes you want to put faith in the stories about tears of manmade idols as they proceed towards the ghats. Maybe there are no tears. And that “maybe” was put as an afterthought to emphasise the desire for an act of faith.

I wasn’t there to witness the meeting of the two sisters - the Badi Devi Ji of Maroofganj and the Choti Devi of Maharajganj. But my aunt was on the streets on the tenth day of Dussehra to see the two goddesses meet each other. She said they believe the two sisters are brought face to face and then the younger one follows the elder one to the river bank.

“Nothing has changed at all,” she wrote in a text on the family whatsapp group.

In the old days, we would go to see the Badi Devi Ji of Maroofganj. But many years have passed since we were little girls who dressed up in new clothes and went to see the processions and stayed up all night counting the idols who went past us. We had our favorites. On the seventh day, they invoked the goddess and she was unveiled. My mother says the faith instilled life in her. Can gods ever exist without us? 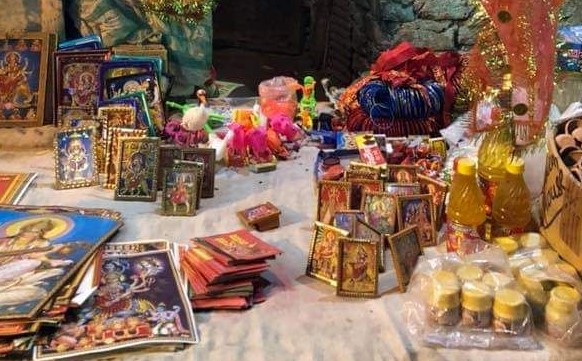 As a child, once at the Patna Zoo, I pointed out to the caged lion and said to my mother I wanted to ride the tiger like Durga. We heard stories about Kali slaying Raktabeej and even then, there was an empathetic take on the fate of the demon. There was never a pure villain. And maybe that’s why in life I never believed that pure evil could exist. It took me a long time to understand some of us are ungrateful. And even though Dussehra for us was always about the Goddess, I remember once we had gone to see the burning of the effigy of Ravan. As I stood there, I thought it was wrong to burn a man who was building a staircase to heaven, a man who was knowledgeable, a man who wanted to avenge his sister’s mutilation, a man who waited for consent. And even when my mother told me stories about Ravan, she said he could order the moon and the sun to obey his command because he was so learned. Sita, we believe, was from erstwhile Bihar. And that’s she said we don’t name our daughters after her lest she suffers her fate of abandonment. There were all these viewpoints. We grew up with perspectives. With counter narratives. Like the story of Karna. When they taught us Mahabharata, my mother always said the hero was Karna. Ramdhari Singh Dinkar dedicated his epic poem to the martyr. And Draupadi was a warrior. And Shikhandi taught us how to see sexuality.

In one of those counter narratives, the goddesses are angry. I watched them go past me. They say if you look closely, you could see them cry. I thought I did. That’s how we leave.”