The Joke’s On You: Politician, Celebrities Try Comedy For A Change At One Mic Stand

“I think the idea of seeing your favourite people in a new vulnerable position is always endearing," One Mic Stand’s showrunner comedian Sapan Verma said. 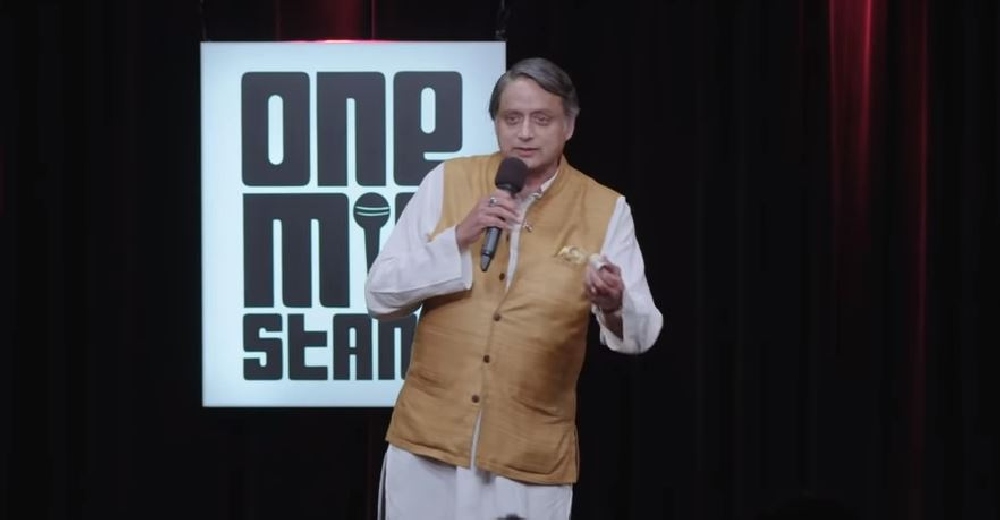 Think, that you are on the stage as a comedian for the first time. You tell your first joke and the audience is not bursting into laughter, just some subdued chuckles from here and there. That’s a nightmare.

Every celebrity guest on Amazon Prime’s new comedy show ‘One Mic Stand’ goes through this potential nightmare before courageously getting up on stage. The show, hosted by comedian Sapan Verma, aims to bring celebrities from different fields onstage. Each of them is mentored by one professional and popular comedian.

One such guest was Shashi Tharoor.

By doing a stand up, Tharoor has created a sort of record as the first Indian politician and elected lawmaker to be getting on stage to do something other than giving a speech or giving away awards. When a politician takes the mike and cracks self-deprecating jokes that is a rare event.

All the jokes that Tharoor couldn't include in his speeches, he used as an inventory for this stand-up act and he had only 24 hours to prepare. He brought in his expertise on British colonialism and politics.

“They don’t teach a word of colonial history in British schools. You can do A levels in history at the best schools in England without learning a line about colonialism. In fact, they mention colonialism about as often as Narendra Modi mentions demonetisation these days.”

But the following one was quite average and even runs the risk of a millennial responding with 'Ok Boomer': “When millennials find somebody attractive, they call them a ‘snacc.’ Now since when was it a compliment to say to somebody that you look like a sabudana vada?"

The ‘snacc’ reference is something Tharoor learned from an interview with American comedian Hasan Minhaj, who quizzed him on his much-touted vocabulary and it turned out, he did not know this particular slang.

Tharoor seemed a little out of breath. Some of his jokes were duds, like his take on millennial lingo. In contrast, his jokes on language-skill fared much better. Nonetheless, Tharoor emerged as a politician who can make you laugh 'intentionally’. That’s some achievement.

It was Tapsee Pannu, however, of the ‘Pink’ fame who stole the show. Not only did she have strong deliveries and apt timings for punchlines, but she also exuded confidence and created relatability with the audience.

She did not play it safe and cracked a joke on the political establishment as well.

When the episode on Richa Chaddha started, it appeared quite promising. Ashish Shakya, her mentor comedian and Sapan, both helped her find a way to use her acting and mimicking skills to create content for the show.

The chat between the three was out and out funny and Chaddha brilliantly, but casually, acted out different characters through funny gestures and dialects. During the chat session before the show, Chaddha casually slipped in a joke, asking if the comedian duo could plant in the audience a few people who could “laugh a lot”.

Shakya dismisses her plan saying: “We don’t have a budget for Sidhu,” referring to the cricketer-turned-politician Navjot Singh Sidhu who became famous for his loud and hearty laughter in the TV show called Comedy Nights with Kapil.

But in her set, Chaddha could not repeat the same relaxed, comical version of herself and it ended up being a bit underwhelming. If she would have been more personal and raw, that she otherwise is, it could have been a much better show.

The usual self-deprecating and gender stereotyping humour of Zakir Khan failed to make an impression, thus making his celebrity guest Bhuvan Bam look much better on stage. Bhuvan, a widely known YouTube star, delivered an act that wasn't outstanding but it was consistent.

While there was no ROFL moment, his warm energy rippled through and was mirrored back by the mostly young audience. Being an on-screen, comical performer appears to have helped his act. He presented a candid version of himself and not one of the comic characters from his videos.

Musician Vishal Dadlani had some good moments, but his anxiousness about remembering the jokes and performing in greater proximity to the audience got in the way. But he did recover from awkward moments such as when he delayed a punchline while looking for the cue card.

One of his best moments was in the beginning when he introduced himself as Vishal but not having the last name Shekhar. Some in the audience had an ‘oh really’ reaction which was unexpected for Dadlani. But he turned that into a funny moment. “I can’t believe it is coming as a surprise to some of you!” he exclaimed.

All of this makes for a good two and a half hours watch with each episode being around 30 mins. One Mic Stand’s showrunner comedian Sapan Verma said in a statement, “I think the idea of seeing your favourite people in a new vulnerable position is always endearing."  And he is right.