From Neil Patrick Harris’ cleverly disguised portrayal, Jonathan Groff’s cold-blooded persona, to the desi girl Priyanka Chopra, who plays a 20 -year-older version of Sati, all the new characters have added new and more fascinating layers to the always-intriguing storyline. 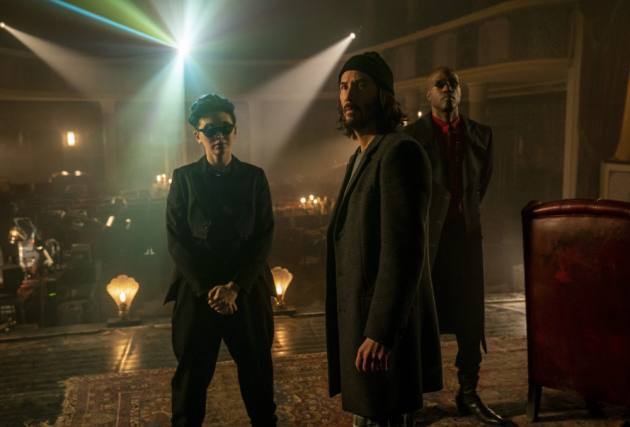 When the Chosen One aKa Neo aka Thomas Anderson (Keanu Reeves), had saved the world, and managed to save the love of his life Trinity as well, at the end of Matrix Revolutions, many thought there was nothing more to take the story further. So, when ‘The Matrix Resurrections' was announced roughly, 20 years after the release of the third film in the 'Matrix' franchise, there was an obvious excitement and a tinge of nervousness as well, about the fate of the fourth film. Well as it turns out, Lana Wachowski, found a way to not only bring back the characters from the first three films of this popular sci-fi franchise, it also took the story further, which didn’t seem forced or gave the feeling that the movie was made just to encash it only the nostalgia from the first three films.

Okay, let’s be honest here. It did cash in, on the nostalgia factor, and throughout the movie, there are enough instances to prove that. But, there’s a meaning and a reason behind how Lana Wachowski has gone about it. The flashbacks from the first three films are used just to connect the storyline to the current point in time, where Neo finds himself.

Where does he find himself, you ask? At the same point, he did, in the first film all those years ago. Obviously, there’s a difference now, since saving the world, made him a legend. He is now the creator of one of the most popular, if not the most popular, video games ever created and he has a big team of excited creators (which also includes Purab Kohli. No, it's not a spoiler) who want to take the Matrix’s story-line further. He has everything, one could ever dream of. But longing for a connection, which also haunted him in the first film, is what made him search for answers, and in this case, seek therapy from Neil Patrick Harris.

The connection is obviously given a bit of meaning when Thomas meets Trinity (Carrie-Anne Moss), who is Tiffany in the Matrix’s world. Completely unaware of her reality, Tiffany too, connects with Thomas Anderson and often wonders about the likeliness of her personality with that of Trinity’s character in the video game created by Anderson.

Confused and looking for answers, Neo gets a message. Instead of his computer, the message is on his smartphone. He runs into a team of individuals, led by Morpheus Uno (Yahya Abdul-Mateen II), who once again teaches Neo, the difference between the real world and the matrix. Neo meets familiar friends and connections, where he learns about how the world continued to exist while he was gone.

Because of the flashbacks and a very similar storyline, it is natural that some may feel, that it is 'That Matrix Resurrections' is nothing but the first 'Matrix' in disguise, but if one pays close attention to the title, they shouldn’t be surprised by the similarities at all. Call it throwback moments, or fan service, the lack of more new characters did add to a bit of disappointment, if at all there is any.

From Neil Patrick Harris’ cleverly disguised portrayal, Jonathan Groff’s cold-blooded persona, and to the desi girl Priyanka Chopra who plays a 20 -year-older version of Sati, all the new characters have added new and more fascinating layers to the always-intriguing storyline.
In fact, the new characters, is what this film is really all about. Of course, it is about Neo and Trinity too! That’s what it has always been about. Ooops! Was that a spoiler? The choice is yours – Red pill or the blue pill?