‘The Sky Is Pink’: When Priyanka Chopra Jonas, Farhan Akhtar And Rohit Saraf Met The Chaudhary's At TIFF 2019

The Sky Is Pink team experienced a momentous occasion when they watched the film with the real Chaudharys, the family on whom the film is based, at the Toronto International Film Festival 2019 for the film’s world premiere. 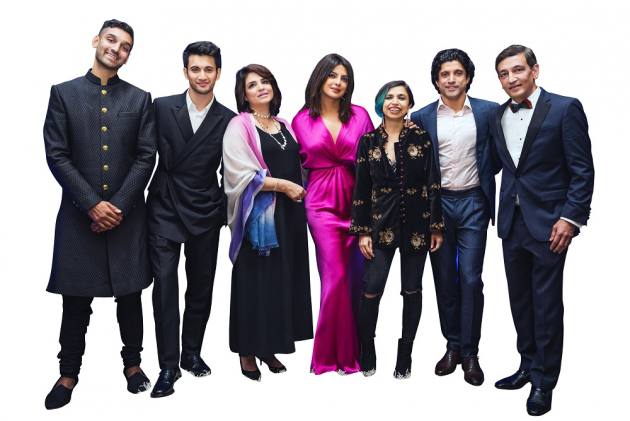 Sharing the experience, Priyanka Chopra says, The Sky is Pink is a love story that spans 25 years… it starts where most film love stories end… after the romance comes marriage, kids, careers and just everyday life.  It’s an incredible, unique story of hope, love, family and living life to the fullest.  It’s a reminder of how we need to celebrate the life we have and the people we love.  It’s the third time I am essaying the role based on a real-life person and it has been a privilege to essay the character of Aditi.  I am honored that Aditi and Shonali have trusted and chosen me to tell this amazing story."

Farhan Akhtar adds, “It was amazing to see them there, celebrating their lives, their daughter’s life with us and the 2000 people at the screening. I never tried to imitate Niren in the film but I understood that at the core, the emotions were similar.”

Playing Ishan in the film, Rohit Saraf says, “This was a first for me on so many levels. I had only met Ishan once when he was in London on a day we were shooting a crucial scene. But seeing him there, the strength that he possesses, was powerful and humbling at the same time.” It was a huge moment for Chaudhary's as well and Aditi shares, “I am grateful that a prominent, powerful woman like Priyanka is portraying Aisha’s mother. When Shonali called to tell me that PC has agreed to play Aditi, I immediately asked her who will be playing Aisha? Zaira came on board, and I heaved a sigh of relief. The actors portraying us are perfect; we couldn’t have asked for more”

Aisha’s father, Niren Chaudhary says, “I have admired and been inspired  by Farhan for so many years and was delighted that he got to play my role - he is effortless, authentic and extremely powerful in the film: he is truly fantastic both on and off the screen!” Ishan Chaudhary also adds, “Rohit is exceptional in the way he has captured the unique relationship that I had with Aisha - the love, the laughter and the heartbreak.”

‘The Sky Is Pink’, is a story of a family that never gives up despite all the odds and an amazing love story of a couple that traverses decades and continents, told through the lens of their sassy, sardonic, spunky teenage daughter, Aisha. While Zaira Wasim plays the role of Aisha Chaudhary and Rohit Saraf plays her brother, Priyanka and Farhan play their parents in the movie.  Directed by National Award-winning filmmaker Shonali Bose, The Sky is Pink is produced by RSVP and Roy Kapur Films, in association with S K Global and Purple Pebble Pictures. The film is written by Shonali Bose and Nilesh Maniyar, starring Priyanka Chopra Jonas, Farhan Akhtar, Zaira Wasim, and Rohit Saraf. The film is slated to release on 11th October 2019.