Even when it stops surprising us, director James Gunn comes up with sudden completely unexpected turns to help you settle down in your seats all over again. 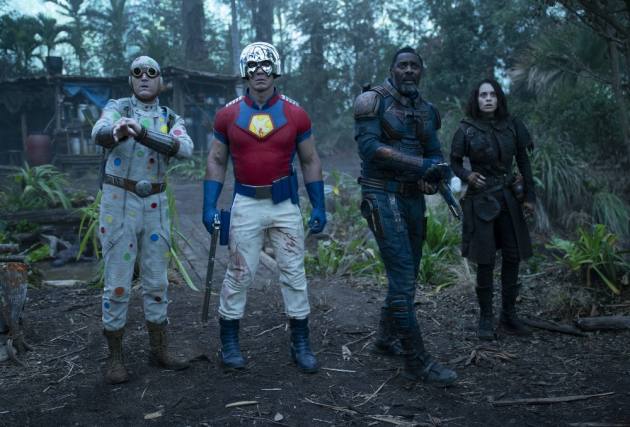 First things first. The new James Gunn wriiten and directed franchise superhero film  'The Suicide Squad' has nothing to do with the 2016 release  'Suicide Squad', and it’s not a sequel to the earliar one, though there are a few old characters common in both, and it’s based on the same source material.

In fact, 'The Suicide Squad'  should have been called Task Force X , and is different from David Ayer’s debacle, but gives it a new and clever spin with irreverent humour and an overdose of four-letter words thrown in good measure. And yes, it’s heart is in the right place too with some inventiveness and emotion.

The plot is simple: Ruthless leader of the American government’s suicide mission Amanda Waller, under orders from intelligence officer, picks thirteen inmates from Belle Reve penitentiary, which is, in reality, a hell with the highest mortality rate in the US, to do an important job: their mission is to destroy Jötunheim, a Nazi-era prison and laboratory in the South. Reminds you of the 'Dirty Dozen'? Well, in a way yes, but not entirely. All the handpicked prisoners are more than willing to come out of the misery they have been subjected to. And so, Australian thief Captain Boomerang; hitman Bloodsport; former psychiatrist Harley Quinn; metahumans T.D.K. and Polka-Dot Man;man-eating hybrid Nanaue; violent extremist Peacemaker; computer hacker Savant; mercenary Blackguard; former Olympic athlete Javelin; alien warrior Mongal; rat-controlling robber Ratcatcher 2; and cannibalistic humanoid Weasel. Each one is recruited for their uniquely skilled qualities. Their task is not that easy for Waller makes an offer to reduce their sentence by 10 years if they come back victorious. At the same time, she also warns them that they all have tracking devives and explosives fitted in their skulls, which can be detonated if they fail to follow her orders.

The opening scene has the Johnny Cash’s classic ‘Folsom Prison Blues', and makes itself clear about the mission. A site for secretive experiments in an American island nation has a Nazi-era prision full of political prisoners held captive for years, and the task force has to free them. The assignment is venturing to the fictional South American island of Corto Maltese, where the Squad fights unknown enemies and military adversaries, traverses jungles, combats guerrillas, must penetrate into Nazi stronghold from World War II that’s been housing a monstrous experiment for decades. In short, they all habe to destroy Project Starfish.

And then begins a series of titillating and often gruesome violence with shocks coming your way as some well known faces playing impotrtant characters are done away with. Just when you thought that there was more coming from them, they are bumped off rather unceremoniously.

Gunn may be dealing with a familiar territory but as long as he springs surprises, we all love it. Even when it stops surprising us, he comes up with sudden completely unexpected turns to help you settle down in your seats all over again. For instance, to add that extra spice, when Rick Flag, Harley, Boomerang, T.D.K., Mongal, Javelin, Blackguard, Weasel, and Savant are deployed on a Corto Maltese beach in order to infiltrate the lab, Weasel drowns, and Blackguard attempts to betray the team to the Corto Maltese military but is shot dead. Soon, Mongal is burned alive when she crashes a helicopter, also killing Captain Boomerang with the shrapnel from the helicopter. T.D.K. and Javelin are also shot dead. As she had warned, Waller detonates Savant's explosive device when he tries to flee the battle in a panic. Also, Harley and Flag are left as the only survivors. Therefore, many viewers may call Gunn’s film a reboot. To be fair, it’s not entirely an old wine in a new bottle; there’s enough that Gunn ramps up adding more gore and humour to keep your interest from sagging in this superhero film?
All the characters are having fun here. But make no mistake, they are all dangerous and ruthless killers , so what if they appear to be cool and sexy? And while they do try to follow their character- sketches of being brutally hard-hearted, they also must look sensitive and even heroic towards the end. Their dark humour, funny repartees even when they faces are blood-spattered with CGI making them look menacingly alien throughout may be a deliberate attempt at making them appear unusual and distinctive, what would happen to them eventually is what keeps us entertained.

From among the cast, there are quite a few charismatic lot: Joel Kinnaman, Margot Robbie, Jai Courtney, Pete Davidson, Nathan Fillion, Flula Borg, and Mayling Ng, Sean Gunn, and not to forget Sylvester Stallone as the voice of Nanaue / King Shark.