The Zoya Factor On A Sticky Wicket, Needs A Lucky Charm For Itself

The film follows a predictable pattern without enough twists and turns and even lacks the emotional quotient required for giving a lift to such a plot. 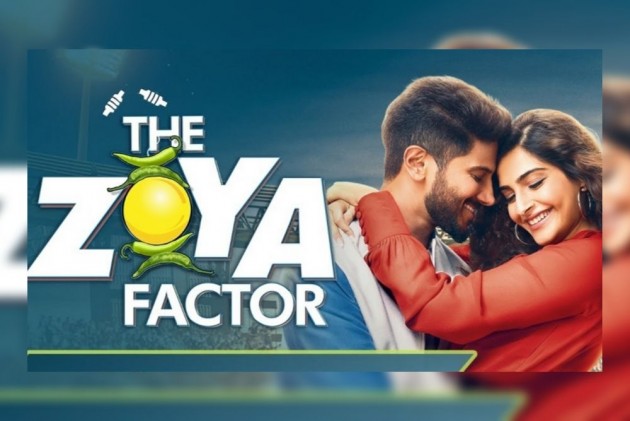 Zoya Solanki played by Sonam Kapoor in The Zoya Factor is 36 going on 37, hardly the age when you expect a woman to behave like a bumbling teenager. But, poor girl, she has everything going wrong for her.

She goes to a prospective groom, a dentist by profession, hoping to find him on his knee, proposing to her with a red rose. Alas, what she gets is a blunt rejection and, to add insult to her injury, a jab of local anaesthesia for tooth extraction (or, was it for the root canal treatment!). But then, what can you expect from a potential husband when you go to him with a large cavity.

Zoya’s family is of no help either. Apart from hating the civilians, her father, a retired army man (played by Sanjay Kapoor) does not have anything else to do other than watching cricket on television or swigging whiskey. Sikander Kher, Zoya’s elder brother, is an army man, too. He is a Major but you wonder whether he is still serving or has retired, because he appears to be on an extended leave, giving his dad the company he needs in the evenings or bullying her sister all the time with his brotherly term of endearment, Jhadoo (broom) for her.

On the professional front, Zoya suffers from perennial pangs of job insecurity and has not progressed beyond the position of a junior copywriter in an ad agency but wait, her character is blessed with one major virtue: she was born on 25th June 1983. Yes, that date, 36 years ago, when Kapil Paaji and his men in white (no blue then!) had lifted the cricket World Cup at Lord’s. And that makes her a god’s gift of sorts to any cricket team, from a friendly neighbourhood outfit to a national squad, which chooses to dine with her.

Thankfully, even before the Pakistanis could know her magical powers, the Indian cricket board mandarins quickly offer a contract of a whopping Rs 1 crore to travel with the national team as a mascot to help it win the World Cup. How lucky she proves to be for the team and how her romance with its captain Nikhil Khoda (played by Dulquer Salmaan) blossoms in the intervening period is what this satirical rom-com is all about.

If you think the entire plot implausible, here is a trivia. The Zoya Factor is based on a best-selling novel of the same name by Anuja Chouhan, which had hit the stands in 2008. Zoya was only 25 then and she could have been pardoned at the time for her naiveté and her belief, instilled in her by her family, that she is really a lucky charm for any cricket team because of the historic timing of her birth.

Let’s admit, people, the plot is not all that implausible as it sounds nor has it dated simply because cricket and superstition have always been linked to each other, not only for the players on the ground but for the crazy aficionados of the game as well.

We all know how Mohinder Amarnath, the hero of the 1983 battle, used to carry a red handkerchief in every match. Many other players, including the greats Sachin Tendulkar and Virat Kohli, have since had one quirky superstition or the other, not to speak of the millions of fans who do not even change their fixed place for watching the game on television in their living rooms, thinking it would spell doom their favourite squad.

At the heart of it, The Zoya Factor tries to make fun of all such superstitions, delivering a message that the talent and strategy, and not luck or providence, ultimately matter in a competitive game. But a slow-based screenplay lets it down.

The film follows a predictable pattern without enough twists and turns and even lacks the emotional quotient required for giving a lift to such a plot. Southern heart-throb Dulquer as the skipper has underplayed his character to a great effect, as he did in Karwaan (2018), but the sparks between him and Sonam are clearly missing through their separation-and-reunion routine.

Director Abhishek Sharma (of Tere Bin Laden (2010) and Parmanu (2018) fame) has chosen to focus more on cricket and superstition and far less on developing their relationship in this film.

The Zoya Factor’s best scenes are the ones that happen in the dressing room of the players. It captures the intense rivalry and all the intrigues that the Indian cricket board is known for. It is, however, the Hindi commentary of the matches, replete with Sidhusims, that keeps the audiences in splits. It's a one-time watch but you come out of the theatre thinking what it could have been, not what it turned out to be.